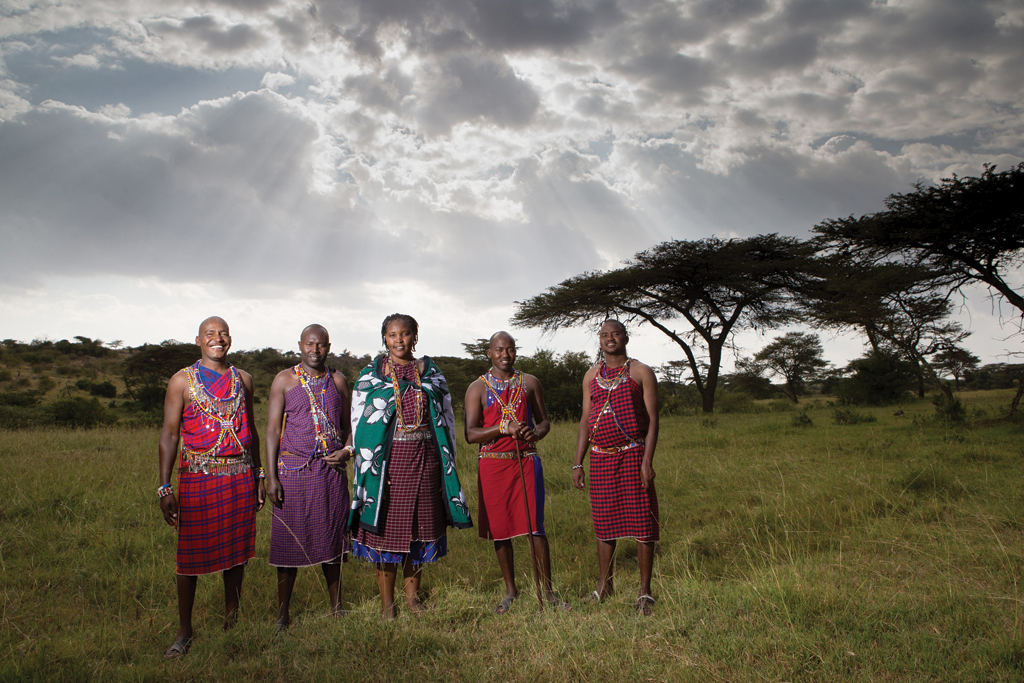 Danger was lurking in the long grass but the thunderous stampede continued. Hundreds of wildebeest stormed down the steep hillside towards the river that sliced through the wide valley below. Lying in wait, a lioness. She sank low in the tall grass, biding her time before pouncing with deadly precision. The calf never stood a chance. It could have been a scene lifted straight from a nature documentary but it wasn’t. Instead, it was unfolding before our very eyes: a thrilling few moments of high drama, life and death, witnessed from the safety of our camp’s sweeping terrace. Such sights are not uncommon at Mahali Mzuri, Sir Richard Branson’s new Kenyan safari camp located within a private tract of land bordering the iconic Maasai Mara.

Mahali Mzuri – reached via a short flight due west from Nairobi and a bumpy hour’s drive from the Mara North airstrip – opened last year and joins Branson’s growing roster of properties, exclusive enclaves dotted around the world. Among them, a chalet in the Swiss Alps, a Kasbah just outside Marrakech and, of course, his own private Caribbean island.

Six years in the making, Mahali Mzuri is very much a family project. Branson himself selected the name (meaning ‘beautiful place’ in Swahili) and his son, Sam, having spent days hiking these great plains chose the final location. Here, perched high on an escarpment 1,700m above sea level and overlooking the Ntiakitiak River, are a dozen space-age tents with zippable canvas walls under striking conical roofs of taut structural PVC. Opinions among the other guests are mixed, with some loving the futuristic design and others yearning for something that blends with the environment more seamlessly. Bigger and far more luxurious than many hotel rooms, the tent was cosy and warm. Thick, hand-woven rugs were laid across the wooden floor. A leather armchair sat in the corner, near the four-poster bed and traditional shukas (traditional Maasai textiles) that gave the interior a nice native touch. And under the bamboo light fixtures in the bathroom was a deep claw footbath with views of the valley. But it’s none of this, or even the sheer level of extravagance elsewhere within the property (the infinity pool, the open-sided spa, the fine dining and free-flowing champagne), that makes Mahali Mzuri truly special.

The camp offers the holy grail of travel experiences. Not a sensual rose quartz massage with views of passing elephants or meals cooked by chefs trained at Nobu in London and served by candlelight in the wild African bush (though both are for the taking) but the rare opportunity to experience the magic of the Mara without the crowds.

Created in 1961, the world’s most famous game reserve has been elevated to natural wonder status on account of its unrivalled wildlife and classic Out Of Africa scenery. The Big Five (elephant, lion, leopard, rhino and buffalo) reside here in addition to countless other species. As a result, however, the protected park is often overcrowded and choked with jeeps ferrying khaki-clad tourists. The sight of a dozen cars around a dozing lion is, sadly, not an uncommon one. 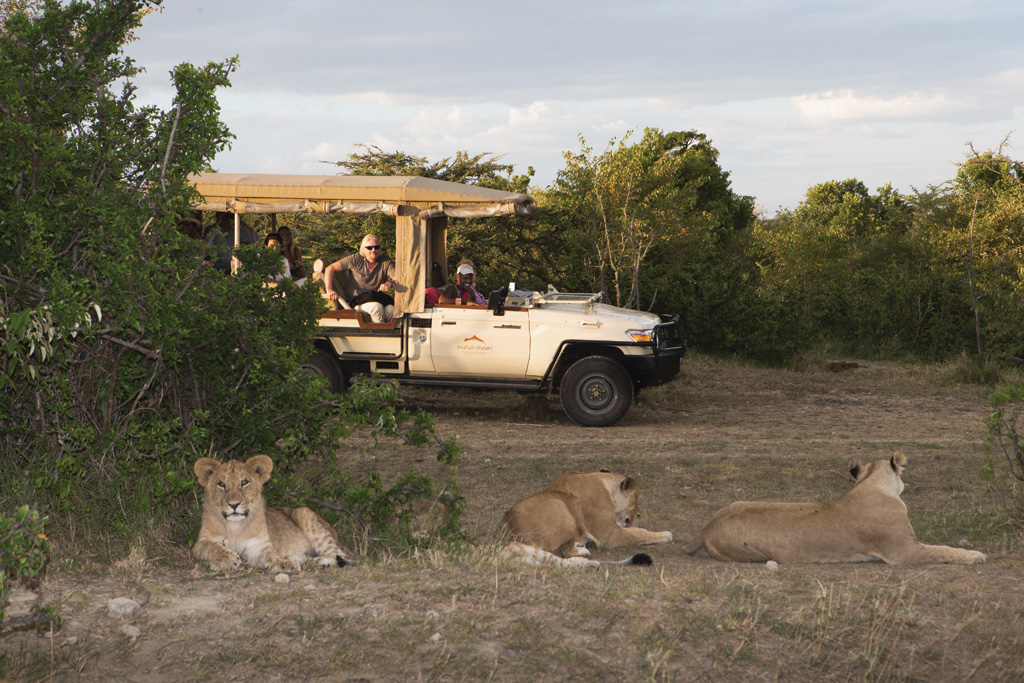 Many visit between July and October to catch sight of the annual migration in which almost two million wildebeest make the perilous journey to and from the Serengeti via the crocodile-infested Mara River. It’s a spectacle at risk as their route comes under threat from local Maasai cattle farmers who own land directly outside the reserve. Desperate to protect their herds, most have erected fences carve up the corridor used by the migrating wildebeest. Something had to be done. Branson first learned of the problem from Jake Grieves-Cook, the former chairman of the Kenyan Tourism Federation, who suggested the solution lay in the formation of private conservancies around the park’s unfenced borders.

After years of intense negotiations, 277 Maasai farmers finally agreed to come together, each receiving a monthly rent in a ground-breaking cooperative scheme that gave birth to the 13,500 hectare Olare Motorogi Conservancy. But it’s not only the Maasai and the animals that benefit, so, too, do wildlife lovers. The conservancy is home to five camps – or which Mahali Mzuri is one – with a maximum of just 96 beds spread among them. Which is this so noteworthy? Because only those staying within the conservancy are permitted on game drives here.

We set off to explore the area with Maasai guide Lenkoko (who also goes under the name Vincent). The jeep thundered across plains dotted with lonely acacia trees and baby impalas. Herds of zebra were spread far and wide like sprinklings of salt and pepper. Lenkoko has been a wildlife guide for eight years, much of that time spent in the neighbouring reserve. So, how do the two compare? “I much prefer the conservancy,” said Lenkoko. “There are hardly any cars here, so it’s more peaceful.”

He was right. We barely spotted a single other vehicle during this and subsequent game drives, allowing us to indulge in the rather smug satisfaction of having our very own slice of the Mara. Expertly guiding the jeep through murky rivers where the bulbous eyes of submerged hippos watched us suspiciously, Lenkoko had spotted something nearby. The rumbling engine fell silent and all eyes lingered on a specific patch of grass just beyond the nearby bush. It was quite impossible to see the leopard but Lenkoko assured us it was there. For an hour or more we watched patiently and silently, hopeful Africa’s most elusive feline would spring into action but all we were treated to was a casual flick of its spotted tail. Later, however, we enjoyed a front row seat as lion cubs wrestled wildly and got up close to a large herd of elephants before stopping for sundowners and salty biltong in a quite bush clearing. Dinner was served back at camp. Fresh from working on Necker Island, Branson’s Caribbean hideaway, head chef Liam Breedveld served up a three-course feast that was anything but rustic. On the menu: salads of mushroom, broccoli, goats’ cheese, slow-roasted beef and espresso crème brûlée. Nursing such culinary excess, some retired to bed, falling asleep to the roars of distant lions. Others, meanwhile, enjoyed a nightcap under a sky of infinite stars, warmed by the crackling fire pit.

Branson’s love for this place dates back decades. He visited as a teenager, became a Maasai elder in 2007, when his airline launched flights from London to Nairobi – a service that ceased last year just weeks before Mahali Mzuri welcomed its first guests. “I have always loved it,” he said. “The people, the wilderness, the game. Unlike the main game reserve, which is overpopulated with tourists, [this place] feels like going out from your own private home.” The conservancy also adds a substantial landmass – around 50 per cent – on to the area already under national protection that encompasses the acclaimed national reserve meaning further good news for wildlife conservation. Yet there’s even more benefits. The following morning gave us the welcomed opportunity to stretch our legs. Walking safaris are not permitted within the reserve itself – a rule that does not apply to the conservancy thereby offering visitors a rare and thrilling chance to get up close and personal with Mother Africa.

Lenkoko was waiting with Muli, a laconic tribesman draped in traditional Maasai garments and clutching a long spear. He was poised and ready for action.

We set off on our 6km stroll – a slow and leisurely journey that revealed the many subtleties often lost on game drives: the iridescent butterflies; the fresh tracks of giraffes and the bones of buffalos. There were a few muffled shrieks when a black mamba snake took us by surprise, a slithering flash of silver on the dusty ground. 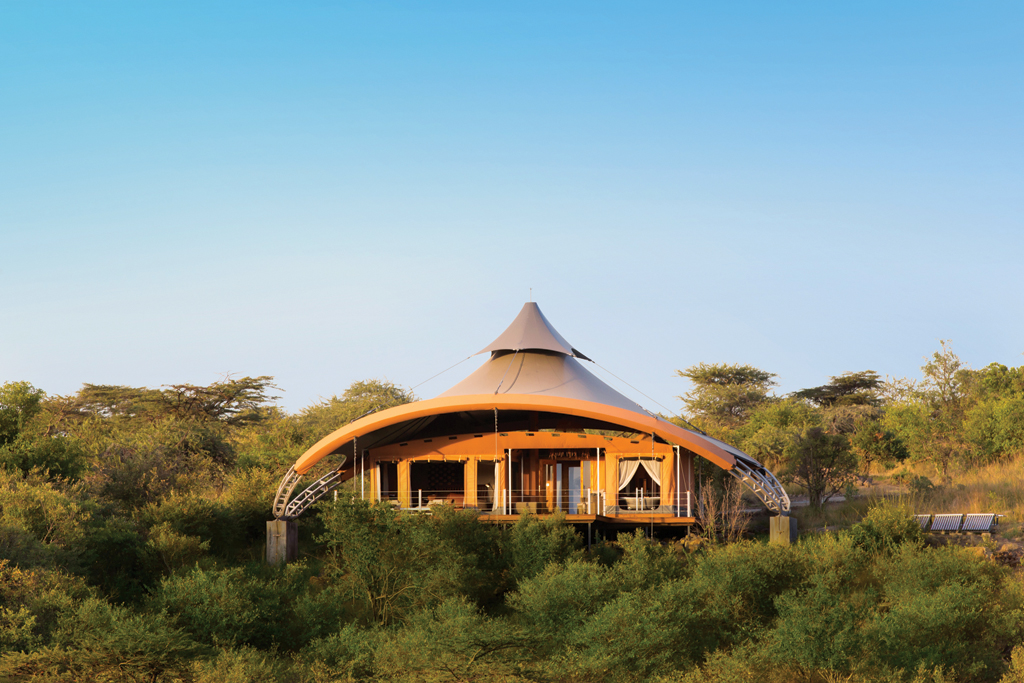 A derelict Maasai huts with walls of mud, sticks and dug appeared. Its roof was one of criss-crossed logs, and inside, beneath the low ceiling, were signs of a life once lived: wooden bed frames and frayed mosquito nets. Talk turned to age-old Maasai customs, particularly how young Maasai males are raised to endure extreme physical pain from an early age. Ear lobes are stretched, front teeth knocked out – all, according to Lenkoko, in preparation for a circumcision ceremony aged 13 that takes place in front of the whole village. “The boy must not flinch or he will be shunned for life,” explained Lenkoko.

The conversation was cut short as we neared a herd of zebra. They stared at us while we stared at them until dispersing skittishly. We pushed on towards the nearby tower of 14 giraffes that nibbled on high treetops with their long tongues. A silence descended as we crossed a valley strewn with large boulders and walked along a high ridge back towards camp. The only sounds to be heard were our footsteps crunching on the arid soil and the breeze that whispered through the long grass.

Of course, the Mara would be nothing without the Maasai themselves. This indigenous tribe of nomadic herders, famed for their jumping abilities and love of chequered patterns, are thought to have spread across East Africa centuries ago from the lower Nile Valley in Egypt.

And while this new form of tourism is benefiting the Mara’s wildlife and cattle farmers, the good fortune is also trickling down to others. A levy of $5 per person per night goes into a fund used to aid local communities with initiatives such as new schools, water projects, adult education and family planning. A cattle breeding project to rear premium beef is up and running and many local Maasai are now learning new skills, from IT to beekeeping. 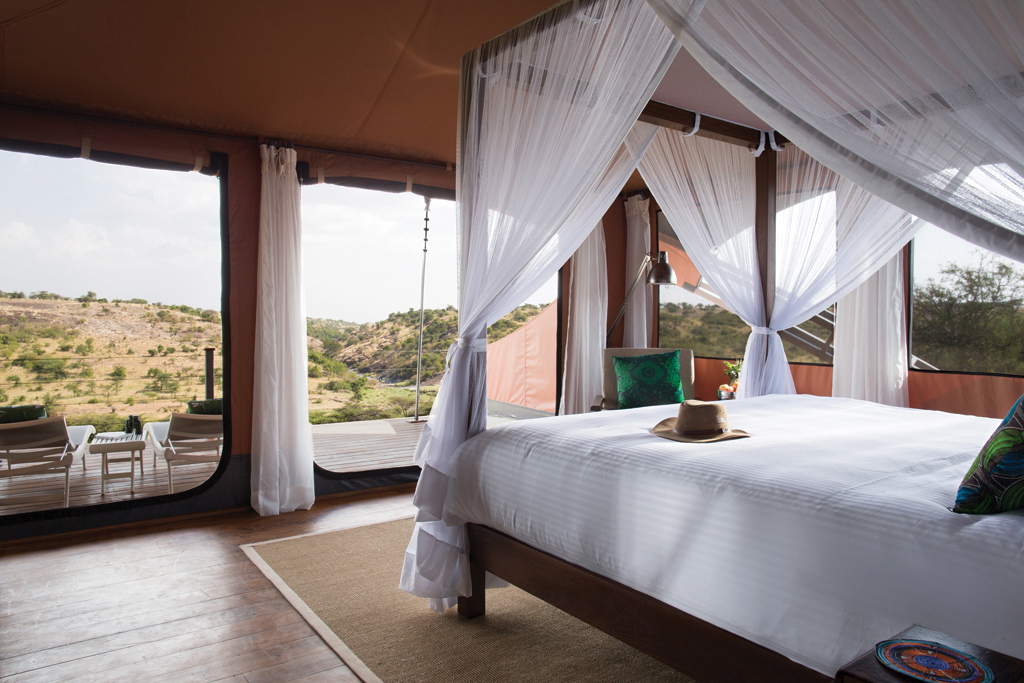 Outreach officer Grace Naiseya tells me more. “We have brought many people together. More than 1,000 women are now making their own honey that they can sell.” The nearest village now boasts a shiny new $15,000 school with dorm accommodation for pupils who would otherwise have an 8km walk back home. School was out when we stopped by but the doors were wide open, allowing goats to roam in and out of the abandoned classrooms.

The ladies of the village were out to greet us. Among them Nayiari Mkoitoi, a Maasai elder with cloudy eyes and long ear lobes that dangled low like saggy rubber bands. Unsure exactly how old she is (the Maasai have little use for birth records), she spoke of a lifetime in this quiet corner of east Africa. “I was born in the Mara and I have never left,” she said. “I can’t imagine what Nairobi is like. A lot has changed here over the years. Life is better and easier now. We have education and opportunities now.”

Life may still be simple in these parts but the modern world is letting its presence be felt. A young barefoot Maasai man in chequered robes checks Facebook on his mobile phone while herding his cattle. We couldn’t help but chuckle. “Some are worried it will impact the culture but the world is changing and people need to communicate,” added Grace. “The Maasai value their traditions hugely but we want people to improve their lives whilst also maintaining their unique heritage – the beautiful singing and dancing that people come from so far to see.”

Back at Mahali Mzuri, I pondered the future of the Mara, its people and animals, while gazing out at the elephants that slowly crossed the valley floor: a parting shot of a special place that will last a lifetime.

Doubles at Mahali Mzuri, from AED2,100 per night, including accommodation, meals and game drives. www.mahalimzuri.virgin.com

India: The places in between