The food and culture of Lebanon’s rural communities is being ignored, with many traditions in danger of dying out. Emirates Man travelled to the village of Baskinta to see what’s in danger of being lost 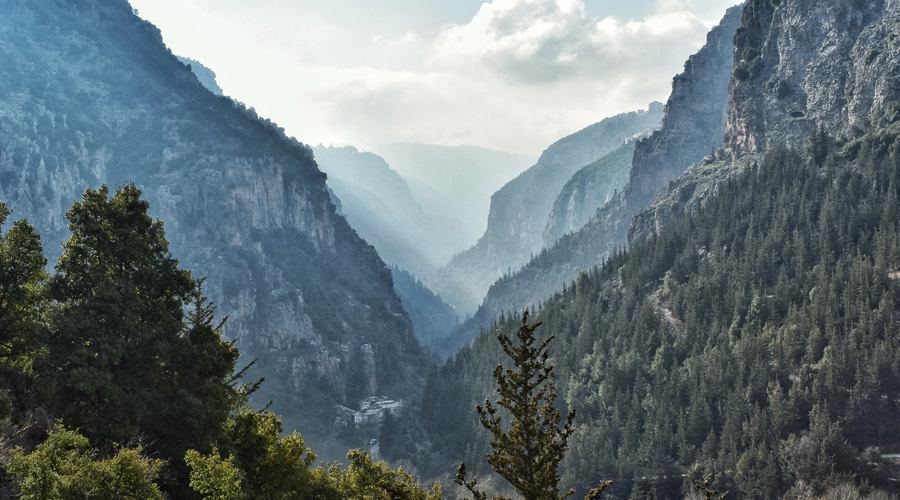 Sari Haddad is driving a 2007 Subaru Impreza east from Beirut on the Matn Express Highway.

“It was just an idea,” he is saying, drawing on a Cedars cigarette. “To celebrate tourism in Lebanon. Our villages are underrated, our countryside is underrated, people from the villages are moving to the cities because they don’t have jobs, traditions are dying. This is a problem.”

We are heading towards Baskinta, through Bikfaya and Bteghrine, past Wadi Al-Jamajem (the Valley of the Skulls) and on towards Mount Sannine, where we will drink fresh water from a mountain spring.

“People need simplicity, people need to see different places, new places, and they have the urge and the curiosity to discover,” says Haddad, explaining the rationale behind Lebanese Wanderers, a rural tourism guide he co-founded last year.

“This was our motivation. And we had huge support from Lebanese people abroad. Because this is what they miss. They miss the villages, they miss the emotional connection, they miss the food. You’ll see what I mean when we get to Baskinta.”

On the outskirts of Baskinta, set back from the main road down a short track, is a small bakery run by Krikor and his wife Laure.

Perched peacefully on the side of a steep valley, their home is sprinkled with the harvests of rural endeavour: bowls of thyme and herbal tea; olives and tomatoes; cucumbers and courgettes; mint and parsley; even walnuts and aubergines. There are wild flowers, potted flowers, and flowers drying in large, circular trays. Somewhere down the hill are chickens and their freshly laid eggs. 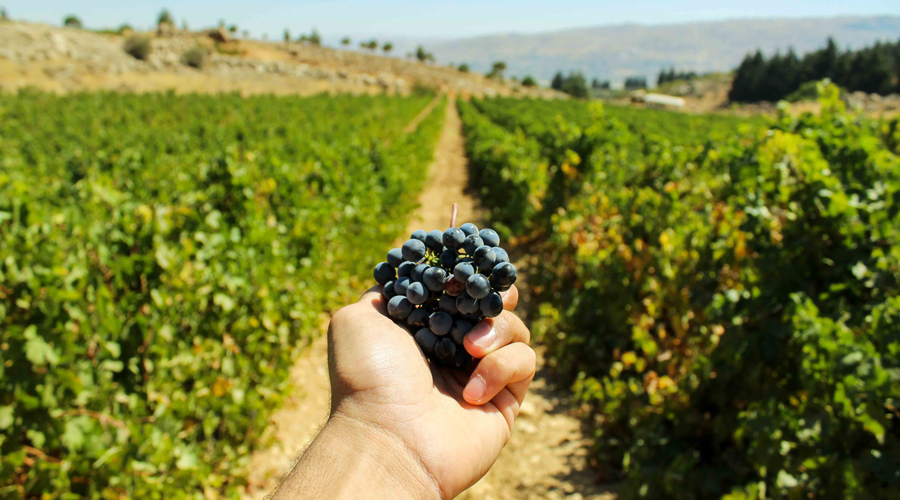 The bakery itself is humble, with low ceilings and an oven that can only fit two manakeesh at a time. There is a long wooden board on which dough – handmade in the early hours of the morning – is rolled into ovals and smothered with ingredients. One is topped with three types of cheese (akkawi, kashkawan and mozzarella), another with homemade zaatar.

Then there’s bayd w awarma, a calorie-laden masterpiece topped with cheese, eggs and lamb confit, which sits confidently in the centre of the large aluminium tray on which we are served. There is labneh w awarma, too, and bowls of olives and freshly chopped tomatoes.

Haddad smiles. “It’s wonderful, eh. Many regions have awarma and cheese, but no one makes it as generously as Krikor. He puts his heart into the food he makes.”

Outside our table overlooks the valley that lies to my left and is as silent as falling leaves. There’s a gentle breeze and patches of intermittent shade that help tame the early afternoon sun. Laure brings us coffee and homemade kaik.

“They’re a very special family,” says Haddad. “People come here because of the simplicity. They will stay like this all day, even if they don’t get any business. People of the villages don’t look for money. They look for people to be happy. To visit and enjoy. Krikor lives off this, but he doesn’t need to enlarge the bakery or make it bigger. He’s satisfied with what he has.”

“Do you know he hasn’t been to Beirut for 45 years,” adds Haddad. “He hates going there. Khalas, he’s used to his life and the calm of this area. He’ll never go back.”

Krikor’s hands are dusted with flour. They have that weathered artisanal look that only craftsmen possess. Strong yet gentle, generous yet precise, they knead, grate, cut and mix.

“The secret to good health is going back to nature,” he tells me when all is eaten. Around him are homemade wooden trellises and a landscape of a deep, soothing tranquillity. 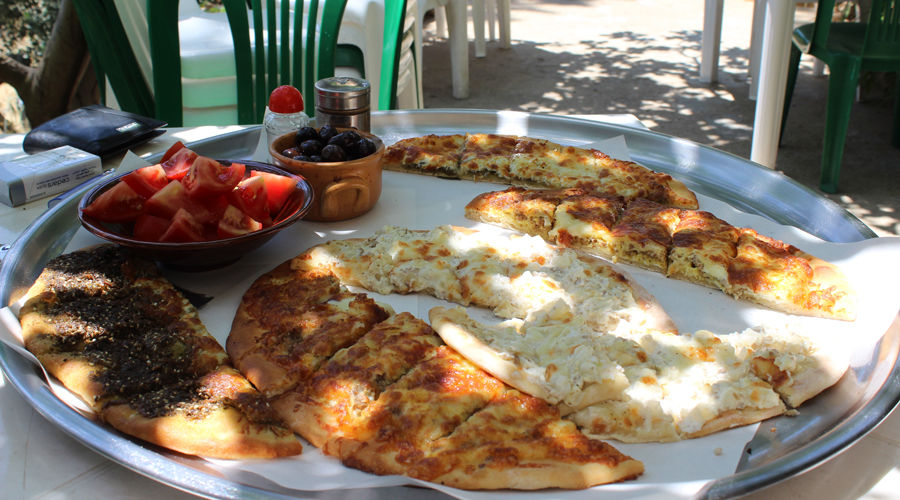 “Every area has something special,” adds Haddad, who studied hospitality management and tourism at Notre Dame University-Louaize. “Kibbeh in the north – the large kibbeh with fat and awarma inside. Nobody makes it as good as them. You can find it in Beirut and in the Bekaa, but it’s in the north that it tastes the best. In Tripoli they have the best sweets, in the Bekaa the best raw meat. There’s kibbeh nayeh and asbeh nayeh; raw meat with onion, mint and a pinch of salt, served with arak. In the Bekaa they make the best arak,” he adds with a smile.

Haddad is young (only 24 years old) but has crisscrossed Lebanon extensively. From Batroun to Chekka, up into the Yahchouch Valley, along the via ferrata at Akoura, and across Jabal Moussa on the western slopes of Mount Lebanon.

“Lebanon is not only Beirut,” he insists. “The true essence and culture of the country lies beyond Beirut, and yet everybody goes to Beirut. Why don’t they go to the villages? Because they don’t know what’s in them. We want to tell people what’s in those villages.”

“Lebanon is not only Beirut. The true essence and culture of the country lies beyond Beirut, and yet everybody goes to Beirut. Why don’t they go to the villages?”

He is succeeding. Lebanese Wanderers’ video of Krikor’s bakery reveals what is possible. With almost one million views, it has had a discernible impact, not only on the life of Krikor and his bakery, but on the village as well.

“People from all over Lebanon started heading to the village after they saw that video,” he says. “They see the village, they hike, they do whatever, and they have lunch or breakfast here. So this video not only helped Krikor, it brought people to discover the village too. It’s good for us online, but it’s also good for trade on the ground.”

On the furthest edges of Baskinta we stop at a memorial garden for the author Mikhail Naimy. There is a large sculpture of the writer frozen in thought and an elderly man who tends the garden. He is Naimy’s nephew and Haddad talks to him at length.

The garden is the first stop on the Baskinta Literary Trail, which, for 24 kilometres, shadows the Lebanon Mountain Trail. The latter runs for 440km from Andaket in the north to Marjaayoun in the south, passing through Dinniyeh, Ehden, Bsharri, Barouk, Niha and a smattering of other towns and villages.

“When we first started hiking we used to go to the smallest shops and always said that no food was allowed to be brought from the city. We only bought our breakfast and food from local shops, from local bakeries. Even bakeries such as Krikor’s that only fit a couple of pieces of bread. We would call them before and tell them we’re coming – “we’re 30, we’re 40, we’re 100” – and they would prepare food for us. 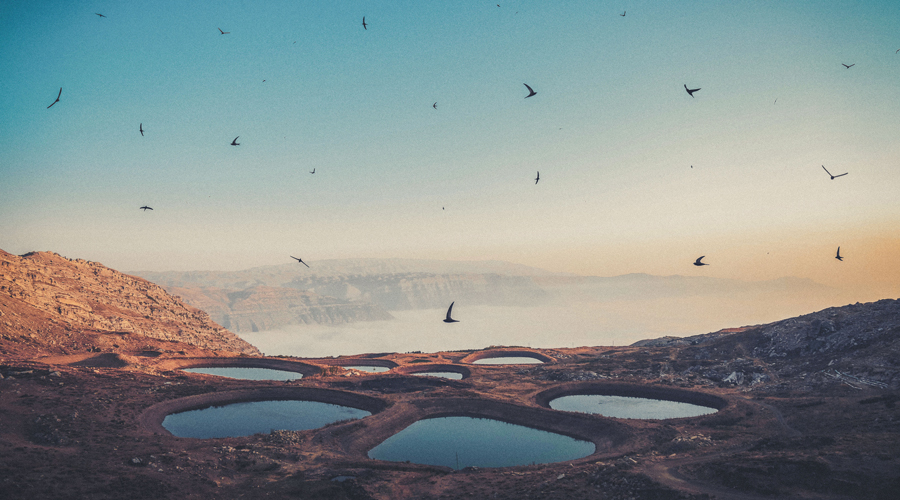 “And it works, you know, this idea of supporting rural tourism in Lebanon, helping local communities to thrive and grow.”

Haddad’s voice is at times sonorous and melodic. He talks with a sense of composure and warmth that is comforting, making it almost impossible not to wish him well. He organises hikes and bike rides, accommodation and tours, but his priority is to grow the Lebanese Wanderers’ database, creating a comprehensive online rural tourism guide for Lebanon with video at its core.

There is luxury to be found too. At Beit Douma, a fastidiously restored 19th century mountain home northeast of Byblos, and the 18th-century Dar El Berkeh, tucked into the Chouf Mountains at the southernmost end of the Mount Lebanon range.

“People come here because of the simplicity. They will stay all day, even if they don’t get any business. People of the villages don’t look for money. They look for people to be happy”

“There is something very special about every single village in Lebanon,” he says. “People have been through so much over the years that even the stones have stories to tell. Religion, history, class and war have shaped our culture in a way that makes every single vil-lage special. Traditions in many rural areas are by themselves a treasure that we should keep from one generation to another.

“The main issue these villages face is that they are still hidden gems. Many villages in Lebanon have all the requirements to attract people from all over the country. They have the nature, culture, food and lodging but lack one main point – exposure.

“People who still own their old businesses will not pass them on to future generations if there is no one visiting them. Old traditions and handcrafts will cease to exist due to immense competition and the disinterest of younger generations. The old shop that sells an au-thentic meal will run out of business and the tradition will soon be lost.

“Our aim is to promote these rural areas through an online project serving as a guide to every village, attracting younger generations to experience these places and their people’s traditions. With the huge influence of social media, our goal is to give rural tourism enough exposure that it becomes a trend.”

On the drive back to Beirut we stop for ice-cream at Bachir. The ice-cream is rolled in crushed pistachios and crowned with a rosette of whipped cream. It takes the remainder of the journey to Beirut to finish it, such is its size. Haddad smiles. “The best ice-cream in Lebanon,” he says, before heading into the traffic of Beirut.

The beats go mad in Mexico

Islands in the stream: Lombok and the Gilis
Advertisement