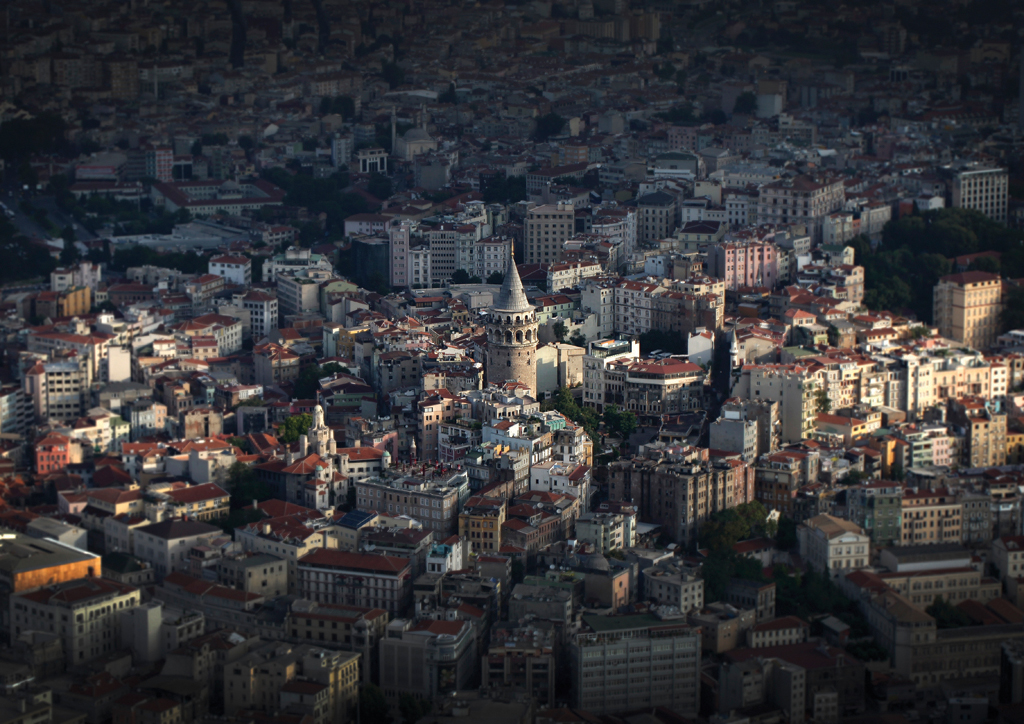 Istanbul is cold in late November. Colder than a sky drained of colour would suggest. Too cold to be conned by taxi drivers and chancers. The Aegean coast has fallen into memory and swirls of wind cut deep along Istiklal Avenue, the wide, never-ending pedestrianised thoroughfare that cuts through Beyoglu. Its myriad side streets have been carpeted a ubiquitous ashen grey, and its single central tramline glistens with a fresh coating of rain. Before us, an endless sea of people, wrapped up against the onset of winter, ebb and flow along this broad, winding avenue; drifting from the steep cobbled gradients of Galata to the vast open space of Taksim Square.

It is dark and night has drawn in but there is a gleam of happiness in the face of the woman walking beside me. Her large, luminous eyes have caught the light cascading from street lamps and untold shop windows, while every nook and cranny along this rambling commercial artery is lined with cafés, restaurants, patisseries, cinemas, art galleries, libraries and theatres. Overhead, celebratory streetlights signal the onset of Turkey’s Republic Day. 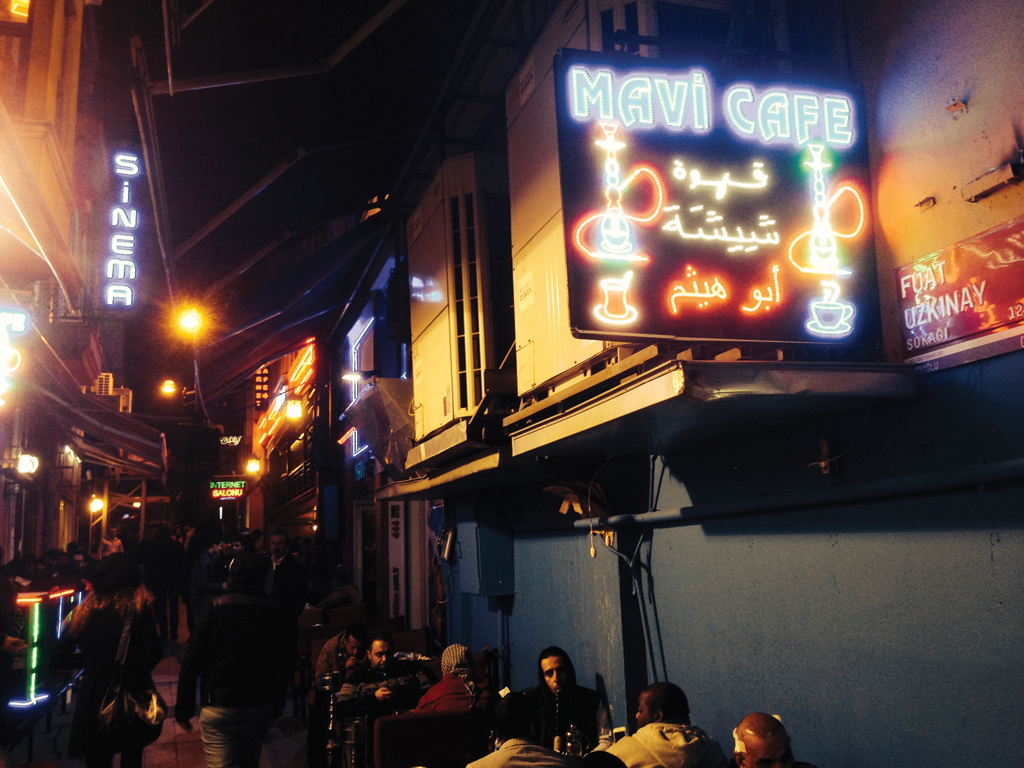 The melodramatic sweep of Istiklal is coated with grand neo-classical buildings and their Art Nouveau cousins, while its old name – the Grande Rue de Pera – embodies a world of late 19th century decadence, Ottoman mansions and the lavish Frankish houses of prosperous Greeks and Armenians. As Ayfer Bartu, writing in Istanbul: Between The Global And The Local, said: “The architectural heritage of Beyoglu symbolised nineteenth-century European capitalism and its alliance with the local population. It was the reminder
of Europe in the Ottoman Empire.”

If reminders are needed, then the medieval Genoese citadel of Galata, now known as Karaköy and lying at the southern end of Istiklal, was the seed from which Beyoglu itself grew. Its steep cobblestone streets and dark side alleys provide a glimpse into Istanbul’s complex and cosmopolitan past, although, like wider Beyoglu, it has been gentrified during the course of the past 20 years. Its central, striking feature – the Galata Tower – built by the Genoese in 1348, remains a beacon to the wonder of Istanbul’s pre-Ottoman past, although it is now surrounded by cafés and boutiques selling Orientalist soap tins and Turkish towels. 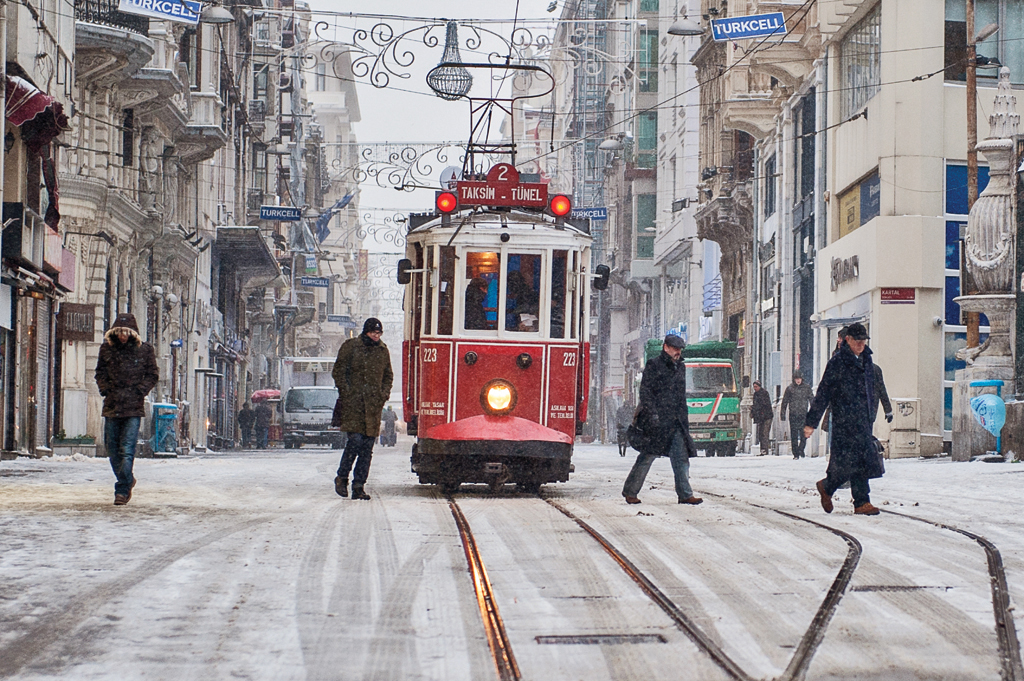 Istanbul is beautiful in the cold. Excess numbers of tourists have been shaken off, like dandruff on a broad shoulder, and the city has been reclaimed by its inhabitants, although the Old City remains the tourist trap it always was. Only snow and sleet will dislodge them.

The idea of snow in Istanbul seems unreal, but for the longest time, director Nuri Bilge Ceylan’s painful, languid shots of loneliness and isolation in the snow-ladened Istanbul of Uzak held sway over my imagination. They sowed seeds of perception that continue to grow. It wasn’t the location, of course, but the men themselves who were lost, though the death of actor Mehmet Emin Toprak a few months after the film’s release in 2002 only added to the city’s sense of despair and melancholy, and solidified my concept of Istanbul as bleak and forlorn.

It’s hard to tell whether that melancholy has lifted, but writer Orhan Pamuk, who has “never left Istanbul – never left the houses, streets and neighbourhoods of my childhood”, shared Ceylan’s sense of sadness and loss. When I first visited Istanbul 20 years ago, to some extent this great metropolis was still his “city of ruins and of end-of-empire melancholy”. It was poorer, shabbier and awaiting most of the renovation projects that would transform the image of this straddler of continents.

It’s hard to dislodge these older images. Harder still to remove images of violence. Images of men fighting as they spilled grotesquely from the front carriage of a tram in the Old City, edging their way towards me in a flurry of knives and fists.

No one really visited Beyoglu back then. Only the hardy and the adventurous. It was a shadow of its former self, rundown and lying derelict in parts, but in many ways Beyoglu stands as the embodiment of Turkey’s post-imperial crisis. A battleground for the city’s cultural identity, it personifies Istanbul’s newfound confidence and economic energy. It raises questions of what it means to be Turkish, European and modern, while simultaneously symbolising civilisation, elegance and the “peasantisation of the city”. As Patrick Wrigley wrote in Guernica, Beyoglu has always been a permissive part of Istanbul, but its “rapid physical, social, and demographic transformation” over the course of the past 20-odd years hasn’t pleased everyone, least of all those evicted in the name of progress.

Wrigley cited Turkey’s oldest movie theatre, the Emek, as an example of the confrontation faced in Beyoglu. Demolished last year to make way for a shopping mall, the Turkish and international film directors who protested against the destruction were tear gassed for their trouble, while next door, a 19th century stone arcade was replaced by a mock Levantine building housing another shopping centre. In their own ways, both cases helped focus a sense of helplessness and frustration that later found voice in the protests that swept across Turkey from the middle of last year. Nevertheless, despite its gentrification, the further you stray from Istiklal, the dingier and more intimidating the streets become. Groups of men block dimly lit alleyways. For many, Beyoglu is viewed simply as a place of sin within a Muslim, if secular, society. It is this, as well as the area’s historic and complex mix of nationalities, that have accentuated Beyoglu’s reputation as a bastion of hedonism.

On Nevizade, tables occupied by friends and lovers have eaten away what little street there is, and there is only a narrow pedestrian corridor for those seeking a place to celebrate the anniversary of the creation of the Turkish republic. Men and women sing and shout from one restaurant to the next, the canopies above them barely inches apart, and as we weave our way along the slender pathway between venues – past waiters with black eyeliner, hipster moustaches and posters of doe-eyed Turkish movie stars – we are tempted into a bar with vinyl records stuck to its walls.

At the end of Nevizade we turn right into Balo Sokak and Solakzade, where male singers play to packed but pint-sized venues placed side by side. Female revellers dance beside crowded tables as others boisterously cheer, creating a monumental sound clash for those who glide up the street in a single fluid movement. It is not until we head back towards the relative tranquillity of Istiklal that the cacophony begins to subside.

Five minutes later and we’re at Ficcin, a restaurant spread across six venues scattered on either side of the same narrow, paved street. Raki fends off the bite of the night air, and as I recount tales of Genoese heroism during the Ottoman conquest of Constantinople, the eyes of the woman before me glaze over. She is interested only in the sensory experiences of the present, not the distance and intangibility of the past. We order kofte, artichokes, grilled chicken and a salad with yoghurt and garlic, her eyes sparkling once more with the joy of fresh discovery. 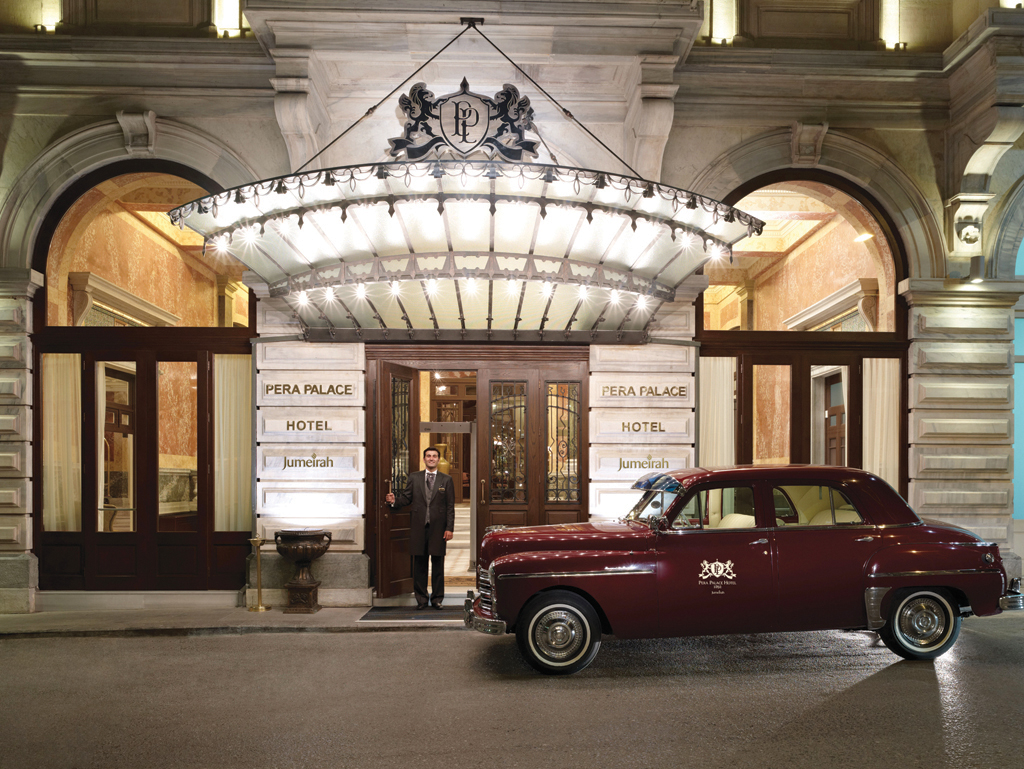 From Ficcin it’s barely a five-minute walk to the Pera Palace Hotel, Jumeirah, a late 19th century masterpiece refurbished and restyled over the course of the past eight years. A neoclassical gem designed by French-Ottoman architect Alexandre Vallaury, its grand, high-ceilinged interiors are awash with dark reds, velvet, gold and the effortless exuberance of the Belle Époque. The colours of the lobby, tea lounge and library are deeper and richer than when Agatha Christie and a cavalcade of early 20th century celebrities made it their hotel of choice, yet its rebirth is indicative of that of the wider Beyoglu area.

In such a grand environment, the two of us pose for fun on our second night. Me in a classic blue suit, her in a beautiful sequinned dress that glitters emerald green in the light thrown from chandeliers and golden leaves. We change, then head out into the Istanbul night and the dark chill of late autumn.

The following morning we head down through Galata to the shores of the Golden Horn, crossing the Galata Bridge towards Sultanahmet and the Old City, with all its sanitised mass tourism and rip-off merchants. We listen to the beauty of the call to prayer in the Sultan Ahmed Mosque, unwind from the lateness of the night before, and sit beneath the continuous vaulted arcade that surrounds the mosque’s great courtyard. Eventually we strike for the Grand Bazaar and the kitsch backstreets that flow down towards the spice souk, hoping to reach the Golden Horn and the tram back to Karaköy before nightfall. 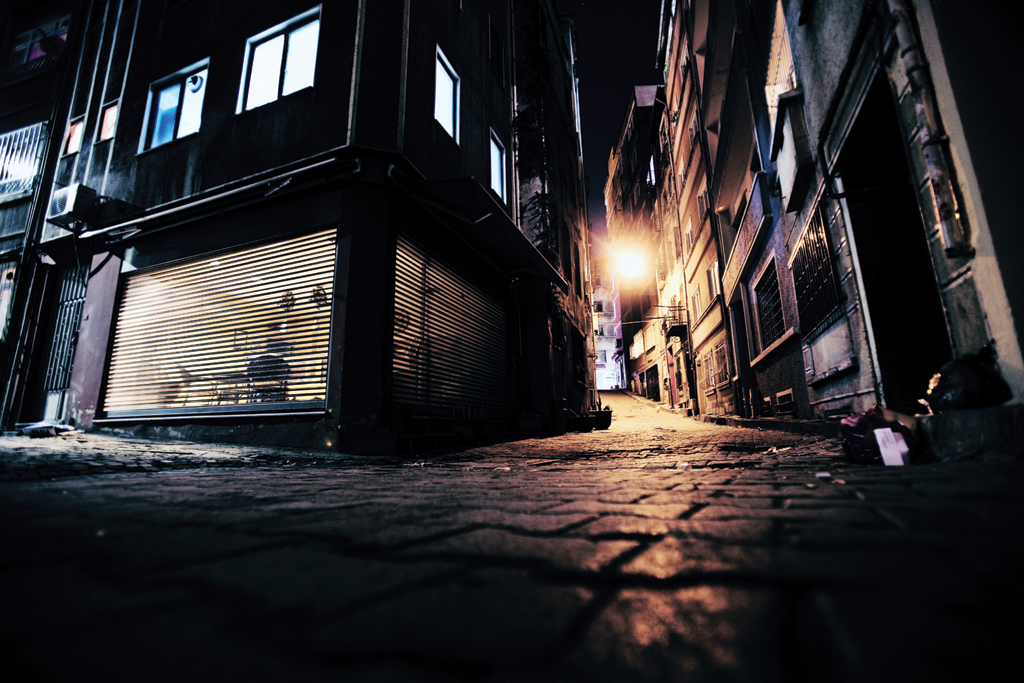 The Grand Bazaar is what a modern market would look like if an Orientalist designed it. It has ceased to be a living entity that provides for, and feeds off, the city that surrounds it, and has become instead the closest approximation of Ottoman pastiche. This is no Damascus before the war. No Al-Hamidiyah souq. It is not even Sana’a and its immersive, uncompromising salt market. This is Ottoman Disneyland. We haggle – as we’re supposed to – and exasperate sellers with suggestions of ludicrous three-for-one offers, while a deadpan stallholder concedes that the cheaper of his products will, in all likelihood, disintegrate after a single wash. On the fringes of the bazaar, an Egyptian Turkish Delight seller peddles love tea to the beautiful Palestinian beside me. “I promise you,” he says in Arabic. “If you give him some of this, you’ll hear him say things you’ve never heard before.”

We head north towards Eminönü and into a warren of Turkish tinsel. Mannequins dressed as ostentatious drummer boys have replaced families of Scandinavian tourists, and everything around us glitters or sparkles. Loud, garish shades of red are pervasive, and we are confused as to how we ended up here. Earmuffs, pompoms, tutus, gowns, veils, baskets and objects with no discernible use line shop after shop as we escape into a courtyard filled entirely with towels. Now red gives way to gold and silver in this wonderland of faux Ottoman kitsch.

We continue north in the direction of the Golden Horn, stopping for food and tea before glimpsing the choppy, turbulent waters of the Bosporus. As we cross the Galata Bridge for the last time, hundreds of fishermen stand cheek by jowl, their rods a perfectly aligned honour guard to the murky waters below. We ride past tricksters and scam artists, families of beggars, and couples in loving embraces, their forms silhouetted against the falling sun. We disembark at Karaköy and tackle the steep incline of Galata, finally spilling into the river of people on Istiklal. 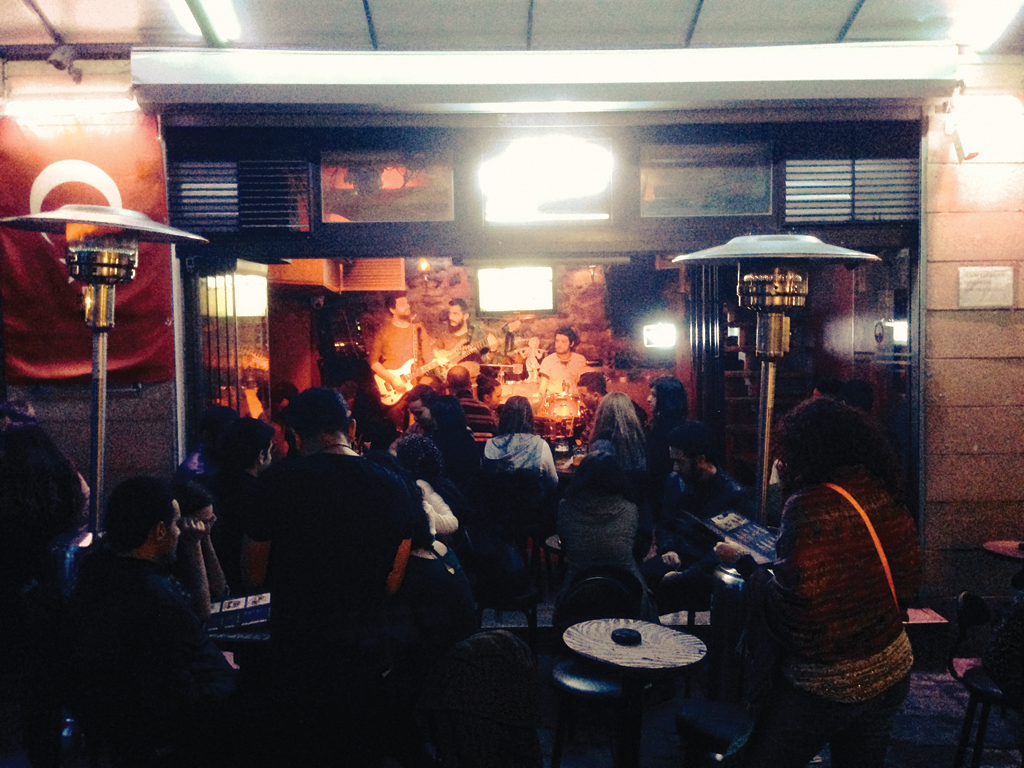 There, set back into the darkening shadows, three men sing a song by Fairuz. The face of the woman beside me radiates warmth and happiness, a fragment of her childhood reborn in Istanbul. She smiles and sings, before we head once more into the darkness beyond.