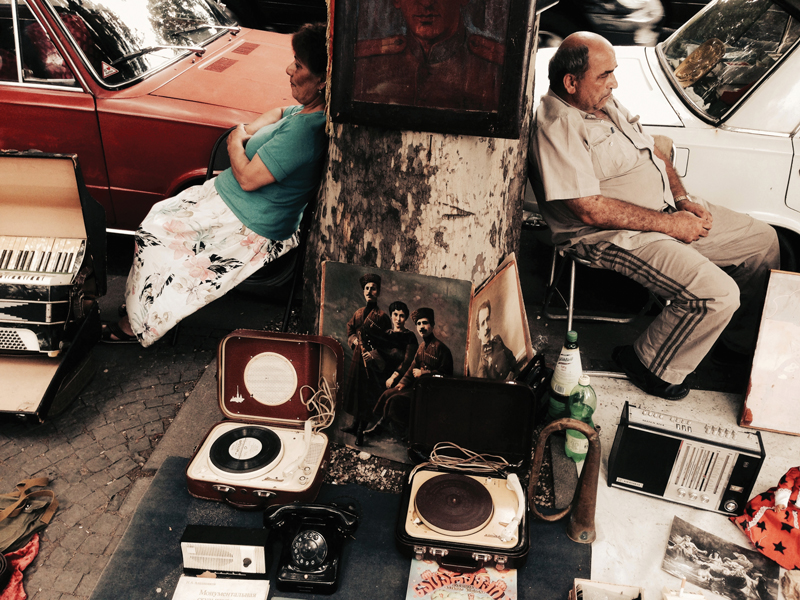 Two years ago Dubai International Film Festival screened the relatively unknown Georgian film In Bloom. Observational, bleached of much of its colour, and populated by the memories of writer and co-director Nana Ekvtimishvili, it was shot with naturalistic clarity by Romanian cinematographer Oleg Mutu. 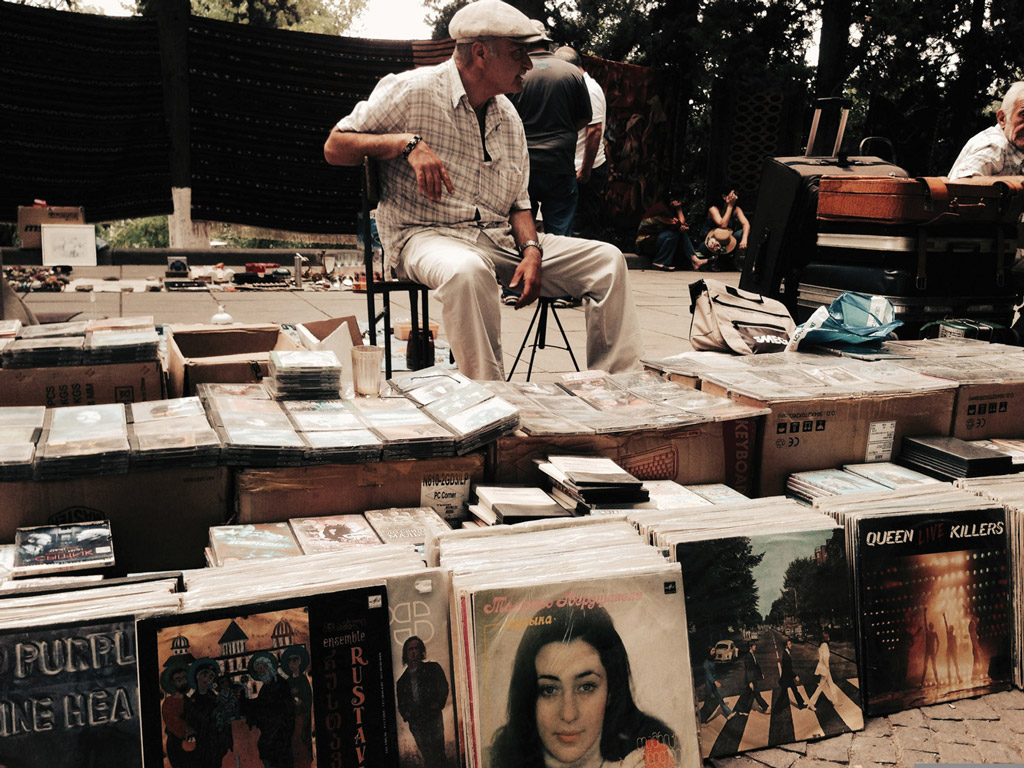 The Tbilisi of In Bloom was striking in its authenticity. At the behest of Ekvtimishvili and co-director Simon Gross, Mutu’s wide, unblinking shots of Georgia’s capital city captured its dereliction and ageing infrastructure with an honesty that bordered on the beautiful. Here was a city whose faded grandeur only accentuated its allure. Here too were directors whose often-uninterrupted observations of two girls coming of age in a country in flux only heightened cultural curiosity.

It was a curiosity that was underlined by a few memorable scenes. In one, the camera never leaves 14-year-old Eka (Lika Babluani) as she drinks and dances at the wedding of her best friend Natia (Mariam Bokeria). She dances with grace, but also with all the expressionlessness of a young girl battling for independence in a society smothered by the threat of violence towards women. Extended and yet dispassionately celebratory, it is one of a handful of scenes driven by music and the nuances of Georgian cultural identity.

It is almost impossible to experience the fullness of this cultural identity as a visitor, although the Tbilisi of the early 1990s is removed – if not totally, then partially – from that of today. Gone is the civil war and the Soviet occupation; gone too, so they say, is the bride kidnapping of In Bloom. Political and social tensions remain, but they are fluid, changing. 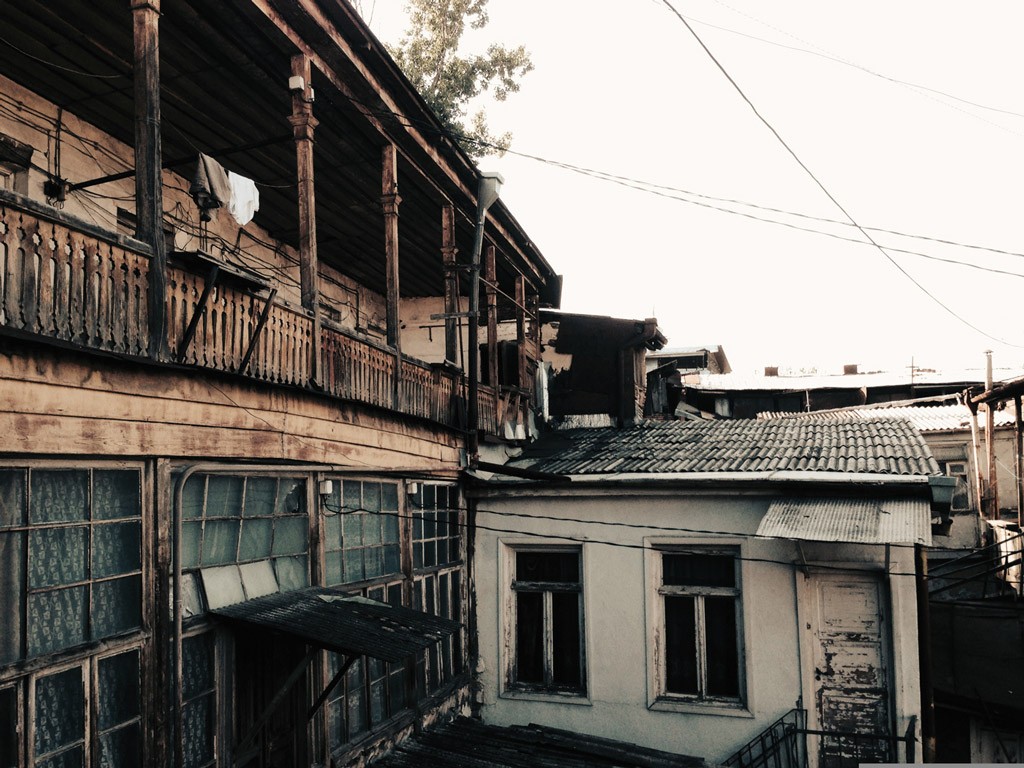 The architecture of Old Tbilisi, too, is changing. Swathes of the old city remain an intricate tapestry of crumbling ruins, unloved walls, cobbled streets and collapsing mansions, but much of the area’s enchantment has been replaced by concrete replicas and an obsession with the immaculate. The Economist stated that in 2010 one-fifth of the housing in Old Tbilisi was categorised as slum-like and in need of urgent restoration, but it is how that restoration has proceeded that has caused concern.

Tara Isabella Burton, writing in Litro Magazine, observed from the apartments in which she lived of the “governmental programme to renovate the old town – building cheery, pastel façades for the rotting slums within”.

“They tear down [Mikhail] Lermontov’s house in favour of a shopping centre that is never completed; they guillotine the art nouveau angels over the old doorways, one by one. The streets are full of sawdust and sawed-off wings, griffins’ heads, the wrought-iron fins of mermaids; vines tangle their way about the vacant lots. Sometimes something new appears in its place: confidently Plasticine, more often than not structurally unsound.” 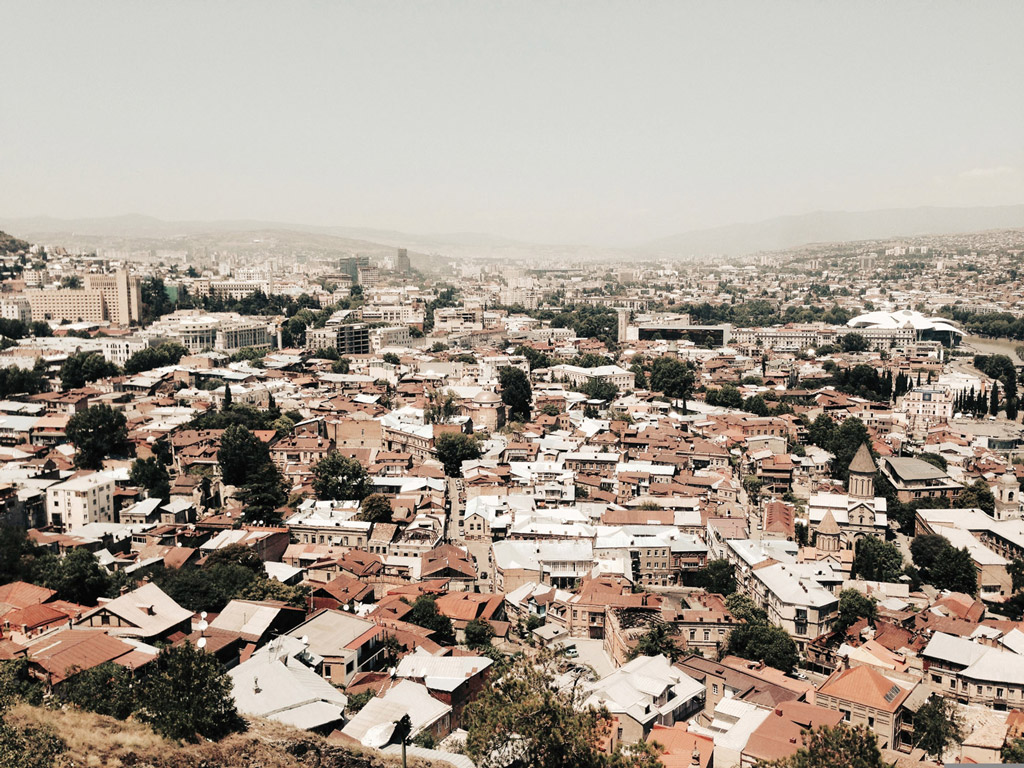 Economic decline, institutional neglect and an earthquake in 2002 contributed to Old Tbilisi’s fall from architectural grace, but all is not lost. At least, not yet. It is still possible to embrace the haunted ambience of Old Tbilisi and its lackadaisical, lazy air. It is possible, too, to marvel at how a city with more than a quarter of Georgia’s population can feel so quiet. So empty. “It is lunchtime and I am the only one here,” wrote Burton. “This is Tbilisi; this is normal. Georgians dine at vague hours, nowhere is ever open or closed. Business hours, like thresholds, are permeable.”

It is into this world that we arrive at the height of summer. Into a world of urban decay, renovated opulence, double bookings and proprietors with a fondness for raised voices. The night is spent not in the Babilina Guest House on Shota Nishnianidze Street, but in a ramshackle apartment a few yards up the street. There, heat, noise, and a bed like stone contribute to broken sleep.

The following morning, on the hotel’s rooftop terrace surrounded by the city’s hills, churches and art nouveau buildings, we’re able to get a sense of Babilina’s place in space and time. Near panoramic views prevail. To the front lies the Mtkvari River, cutting the city in half on its way to Azerbaijan, while beyond sits the golden-topped Holy Trinity Cathedral of Tbilisi. Dominating the skyline on the left bank of the Mtkvari, it is a recent addition to the city’s religious architecture, sitting to the left of the Presidential Palace designed by Italian architect Michele De Lucchi and completed in 2009. Behind me, and off to the right, Old Tbilisi edges its way up Sololaki hill, towards the Narikala Fortress and Kartlis Deda, a 20m-high statue of Mother Georgia guarding the city below.

Downstairs, intricate carved wooden balconies and jetties perch above deserted streets, vernacular architecture blends with influences from Europe and the Middle East, while sweat is our companion, having tracked us across the border from Armenia a day earlier. Babilina’s immediate surroundings are leafy and dilapidated. Many houses are patched together with plaster and supported by wooden beams, while nearby main thoroughfares have been gentrified and the seeds of mass tourism sown. We head out into the intensity of the afternoon sun and follow the old city as it slopes down towards the riverbank and a newer, shinier Tbilisi.

A friend always recounted how he loved the city, its food and its post-Soviet angst. He would tell mid-’90s tales of purchasing swords at the airport, of random violence, and of ajarian khachapuri, a cheese-filled bread dish sometimes served with eggs.
He would talk of food and drink and women. Yet all we eat is kebabs. Kebabs and rice. We go in search of the floral dresses of dark-haired women, narrow balconies where teenagers toast the promise of a brighter future, and folkloric music sung on sidewalk benches. We find Orthodox Christianity, neo-classical façades, hipsters, shade, and the body of former president Eduard Shevardnadze lying in state at the Holy Trinity Cathedral.

We also find the Dry Bridge Market on the right bank of the Mtkvari River. I go in search of Georgian sacred music and folk songs – the dual binders of Georgian society – as the market begins to sprawl down from the bridge and outwards into the park below. Its scale, unknown from the road, opens up before us; a miscellanea lover’s dream. We ignore the stalls of art and tat, drawn instead to the paraphernalia of Soviet imperialism: military medals, posters of Stalin, army helmets, communist ID cards, passports, pistols and knives. We look at the names and images of the people in passports, wondering whether they’re fake or a pathway to the past. Old photographs are scattered amidst cameras, leather belts, suitcases, mediocre watercolours and chipped crystal decanters. We walk on, past a collection of old movie posters, to a man and a woman sitting back-to-back either side of a tree. A hand-coloured photograph of a woman flanked by two soldiers rests against the tree’s base, ringed by vintage portable record players, a classic dial-up telephone and an accordion in a scuffed black box. Not far away, stacks of vinyl records face outwards towards the passing crowds. Many are English or American but there are popular Georgian artists too, as well as a collection of Georgian church songs by the Rustavi Ensemble, which I pick up for less than the price of a cup of tea. I buy a postcard from a stallholder who says it is 100 years old. I humour him, intending to write something poetic on the back before posting it and heading to Akhaltsikhe and the border with Turkey two days later. 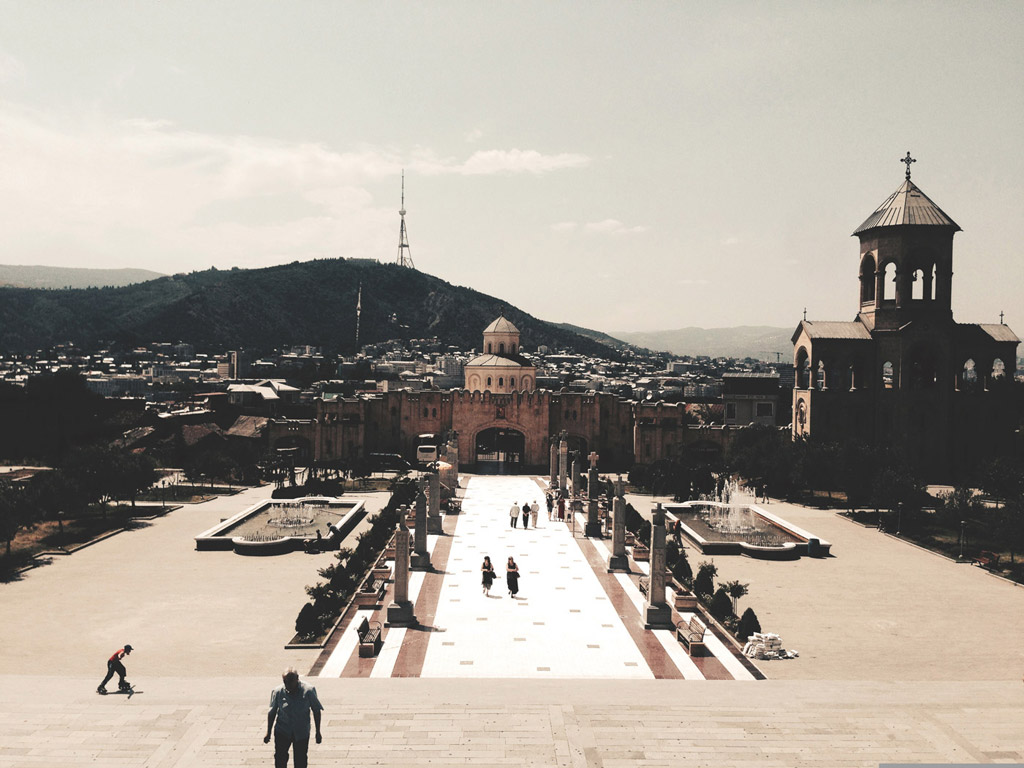 ‘The fabulous land’ is how Russian author Alexander Pushkin referred to Tbilisi in the early 19th century. There’s even a street named after him, one of six that radiate out from Freedom Square, a hop, skip and a jump from our hotel. Pushkin was much taken by the sulphur baths that the city is renowned for, writing in 1829 that “never before have I seen, neither in Russia nor in Turkey, anything that can surpass the magnificent baths of Tiflis”. His contemporary, the Russian romantic poet Mikhail Lermontov, made Tbilisi his home in 1837, although his house in Gudiashvili Square, as previously mentioned, was knocked down in 2012.

It’s heating up as we head back to the vicinity of Babilina, down a set of winding steps to the Gabriadze Theatre, its adjacent café, and mid-afternoon lethargy. There’s a crooked clock tower atop the theatre, an angel strikes the hour, the circle of life is re-enacted, and we discuss the city’s cosmopolitan mix of Georgians, Armenians, Azeris and Russians over a plate of kebabs. We cross to the left bank of the Mtkvari River via the bow-shaped Bridge Of Peace, before taking a cable car to the top of Sololaki hill. The Narikala Fortress is inaccessible, as its Georgian name suggests, and Mother Georgia looks better from a distance, but the views across the city are impressive. The terracotta-coloured roofs of Old Tbilisi roll off into the distance and the long, grand stretch of Rustaveli Avenue, the city’s central commercial artery, can be seen snaking its way across town.
We ponder the fate of Tbilisi. How it was burnt to the ground by the Persians in 1795, rendering the city before us an essentially 19th and 20th century architectural product, despite 1,500 years of history. Despite the Byzantines, the Arabs, the Mongols, the Turks, the Persians, and the Russians all trampling their way across Georgian turf.

That evening we pass by the Gabriadze Theatre once more, turn into Shavteli Street, and stroll past the Patriarchate Of Georgia towards King Erekle II Street. Here Tbilisi comes alive. There’s the Missoni Bar, Re Life, Nineteen and Stelzenhaus, all reaching out to each other across the paved but narrow thoroughfare that separates them. Art, history, food and drink have forged a cocktail of revelry along this beautiful and decadent street, its rainbow-coloured wooden jetties overhanging bars and restaurants that are crowded by the time the sun begins to fall. At the KGB Café we talk of languages and of Google translate, without which our stay in the Babilina would’ve been a far more hazardous experience. We talk of Soviet kitsch and the comfort of nostalgia; of the vague dividing line between Eastern Europe and Western Asia; and of the historic volatility of the Caucasus.

As we wind down the evening and the Skype calls, our bill arrives in the form of vintage Soviet working papers. The youthful barmaid smiles, a photograph is taken, and we head back to the hotel along well-lit but deserted lanes, the higgledy-piggledy nature of Tbilisi flummoxing us momentarily. We retrace our steps, sing, and contemplate another languid afternoon in a city in bloom.

‘You are in Africa now’
Advertisement