Marcelo Burlon: The Maestro From Milan 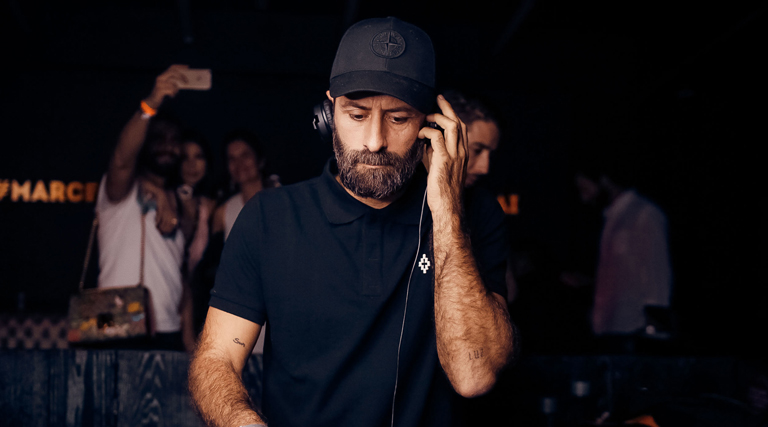 The DJ, creative director, photographer and nightlife wizard Marcelo Burlon’s rise to global influencer has been inspirational. Now his eponymous brand of streetwear is exclusively available at Harvey Nichols Dubai. Emirates Man caught up with him to learn his story.

Every day when I’m in Milan I go to my office in this 17th century building with its incredible ceilings and I’m like, ‘I can’t believe I’m here,’” admits Marcelo Burlon, the Italian-blooded Argentinian polymath. “It’s incredible how it happened. How I got to be there. How I got to be here.”

Burlon – all perfectly trimmed beard and Italian charm – is talking openly as we meander through his capsule collection at Harvey Nichols Dubai. It is compact, as the word capsule would suggest, but satisfyingly complete: bomber jackets, shorts, iPhone case, hoodies and T-shirts, all featuring his trademark Patagonian symbolism and geometric patterns. Foremost amongst them all is the Mapuchian key of the universe.

“I feel very emotional every time someone stops me in the street and gives me a hug; when they tell me, ‘Thank you for your story, thank you for what you’re doing,’” continues Burlon. “I guess I give hope to many kids who don’t know where to start or what to do. I know that I have a big responsibility, so I’m trying to be good to them, I’m trying to make sure I answer their questions. It’s different to the other designers.”

The men’s magazine GQ once described Burlon as a ‘slashie’ – one of those individuals for whom a single title is far from sufficient. He is, by his own measure, a party organiser, DJ, creative director, photographer and nightlife wizard. You can add publicist, stylist, editor and art director to the list if you wish, but for the purpose of this article he is primarily Marcelo Burlon: County of Milan. The man, that is, behind his eponymous high-end streetwear label. 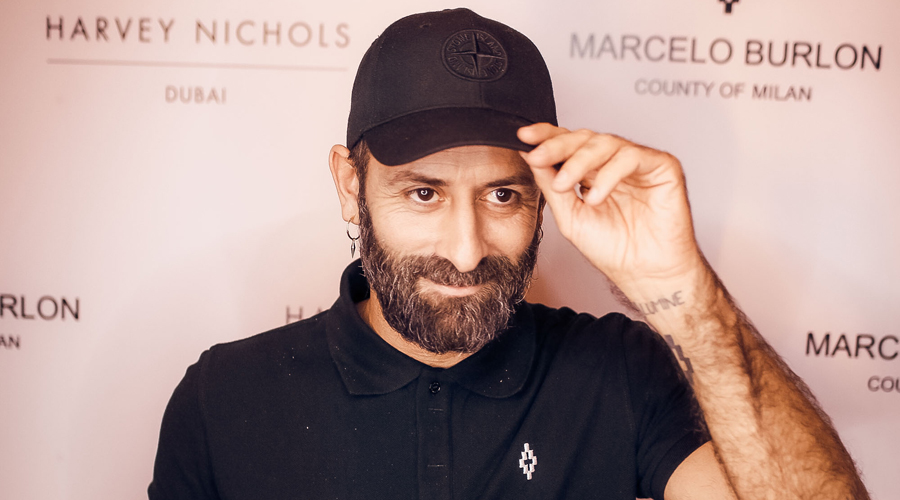 Yet whichever way you choose to view Burlon, it is his rise from poverty to global wunderkind that grabs the imagination. Even he has to pinch himself every now and then. How did a 13-year-old immigrant from provincial Argentina with no formal education become a multi-million-dollar businessman and cultural impresa-rio? How, without finishing school and being forced to work in a shoe factory at the age of 14, did he rise to become a “cultural wanderer, jack of many trades and all-around mover ‘n shaker”? Sometimes he struggles to find the answers himself.

“It’s amazing, it really is,” he admits. “My family left everything behind in Patagonia and started again, and because we had to work we went to work. That was it. My parents couldn’t afford to pay for my school, but somehow I started dancing in clubs on Sunday afternoons with all the kids, then Fridays and Saturdays and it gradually became my main job. That’s how I started. As a club kid in the ’90s.

“I was living in a small town in the centre of Italy on the Adriatic coast and it was the clubbing era. At the time everyone from Jean-Paul Gaultier to Marc Jacobs and all the kids from all over Europe used to fly there to dance. It was a big moment in house music history and I was right there in that moment.”

The rest is history. After moving to Milan at the age of 19 he became the face of an Italian shoe brand, with his photographs featured in magazines such as The Face and i-D. “I moved to Milan because I met this group of kids who were the same age and were working for Prada or other fashion brands. I was doing nothing, just dancing. I was like, ‘I need to do something else with my life.’ And then suddenly I became the door guy at this really important club in Milan called Magazzini Generali, which at the time was the place where everyone used to go. That’s where I started, on the door at Magazzini Generali. Because that’s where I met Domenico Dolce. He asked me to start working for him and I moved from the night to the day – as a PR for Dolce & Gabbana.” 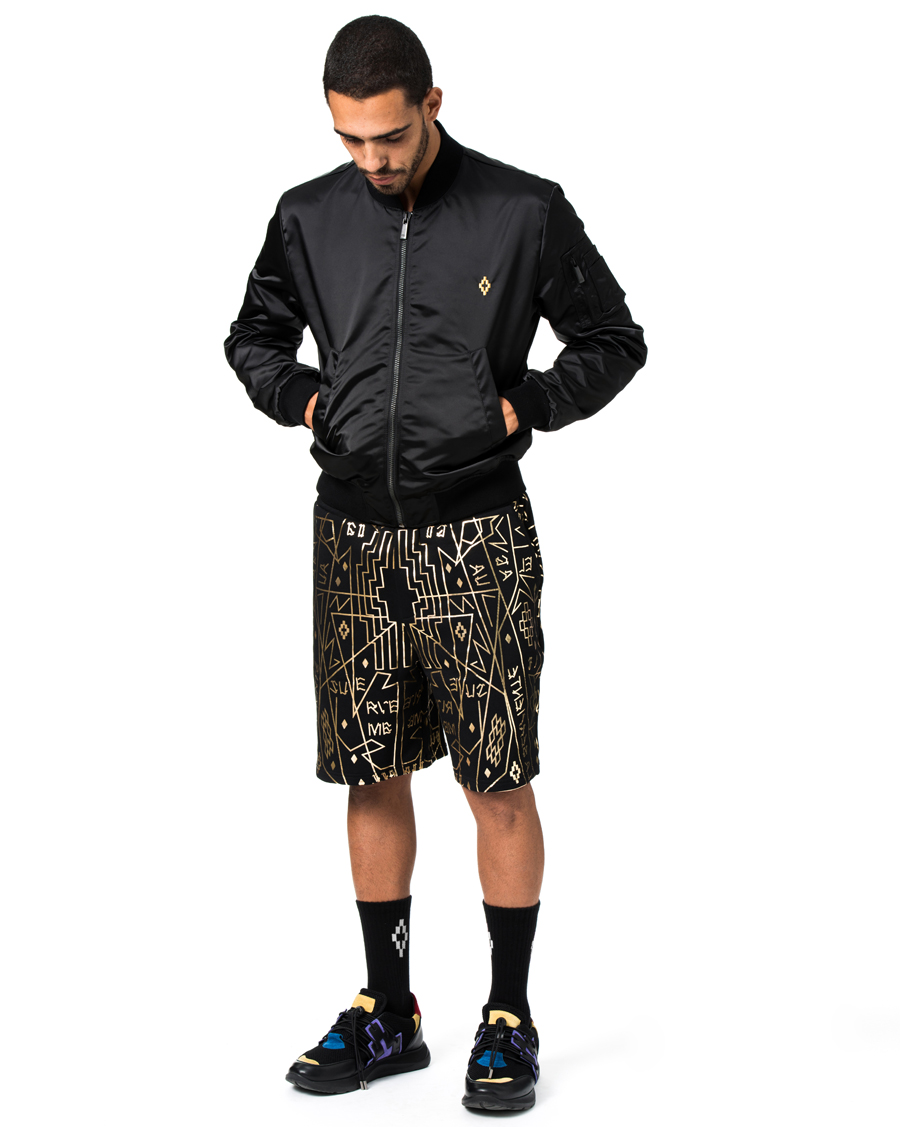 From there his career snowballed. As well as PR, he launched his own magazine before becoming editor-in-chief of the now defunct Italian fashion and lifestyle magazine Rodeo, eventually branching out into DJing and club nights such as ‘Pink Is Punk’ whilst curating events for the likes of Chanel, Prada, Gucci and Givenchy.

“There was always a club or music or dance, you know. Always. And still today because it’s part of my life and part of the promotion of my brands.”

As we walk and talk alone Burlon becomes freer, away from the watchful eye of public relations. His arms are a patchwork of tattoos, while ‘Patagonia’ is inked across his chest, he tells me. “Olga is my mother,” he says, pointing to the name tattooed on his right forearm. “That’s my best friend,” pointing to another. “That’s another friend, Vida. Alumine is my oldest friend, a man connected to everything. This is Tanit, the goddess of Ibiza, which is a place that I love, and this one represents the cosmos and the universe. That sunshine. This is a tattoo by Devendra [Banhart, the Venezuelan-American singer-songwriter].”

Read:
Islands in the stream: Lombok and the Gilis
Nine ways to win at Twitter
Robots Are Taking Over And It’s All Our Fault

Banhart and Burlon are friends, connected no doubt by spirituality and the uni-verse as much as they are by art. The concept of a global community united by a love of music and fashion is important to Burlon. You can see it in his work. In his use of geometric graphic prints in gold mixed with a slew of esoteric Argentinean aboriginal symbols and the throwback imagery of rave culture. He views these graphics as a means of communication; a way to gather people together around a global community that celebrates diversity and artistic contamination.

“I really wanted to tell my story,” he says. “Because I felt that the people who used to come to my parties to dance wanted something more. They wanted to somehow be part of my life or to be part of a tribe. And that’s how it became like a tribe around the world. A global thing.

“Before I started the label I went back to Argentina to research. I spent a month looking for books, going to museums; I went to amazing places in the middle of nowhere in Patagonia to find stories. And then I came back and I took all the symbolism of the natives I had found and mixed it with my own symbolism. It was a clash of different things – my hometown where I was born, the European moment in clubbing, nature and wings, combined with all the places where we chose to print, which is around the neck and shoulders. And you need a very unique printer to be able to do that. It’s not just like a digital print. We use from 12 to 14 colours and each T-shirt takes about an hour-and-a-half to print. That’s the quality of what we’re making.” 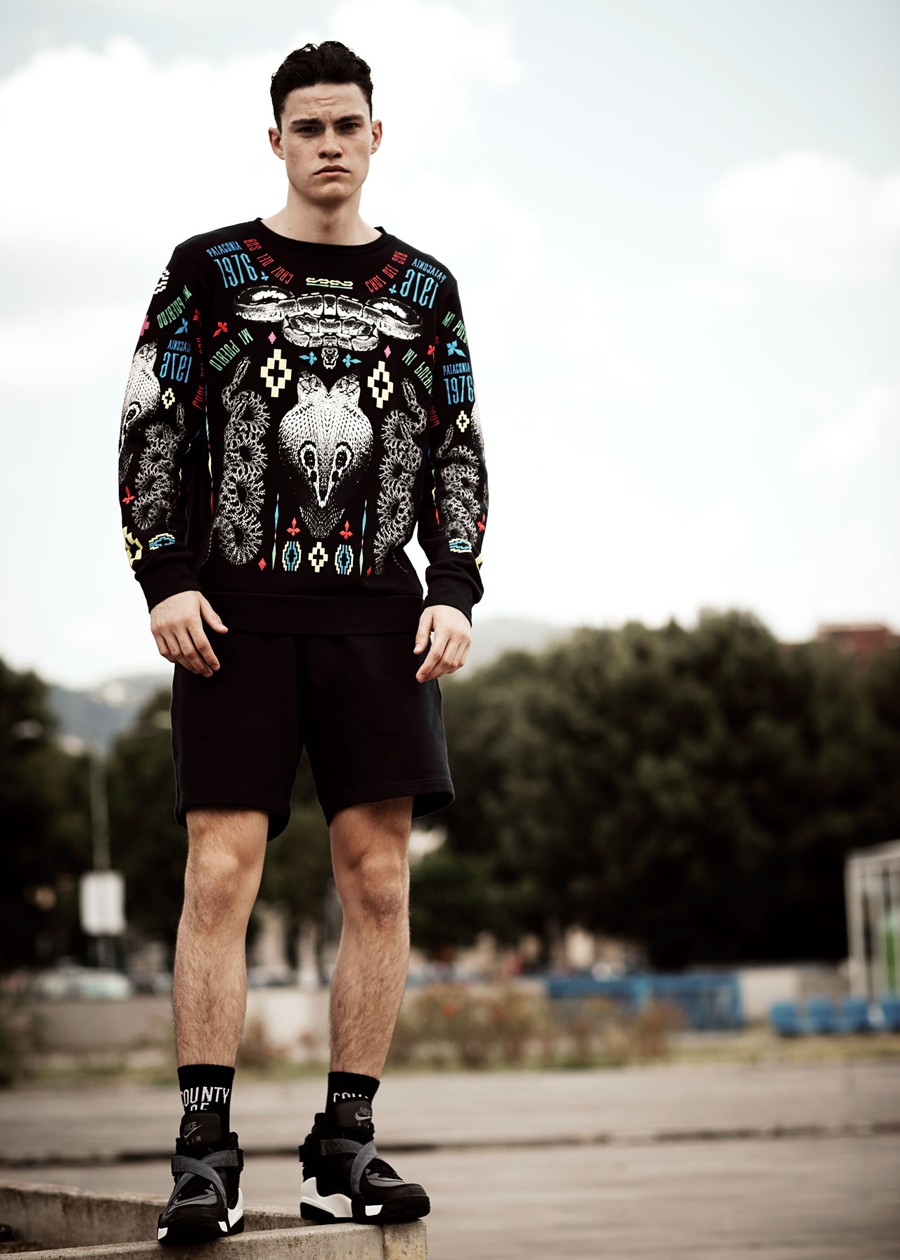 Burlon, who is from an Italian-Lebanese family that migrated to Patagonia in the 1930s, is not himself a designer. This he readily admits. When his original line of T-shirts was released in 2012 it was the designer Giorgio Di Salvo who created the graphics, bringing Burlon’s vision to life. Now Marcelo Burlon: County Of Milan has a life of its own.

When we meet, Burlon has just flown in from Milan and is jetting off again soon after hosting a party that evening at Provocateur. Prior to Milan he was in Argentina, where he’s in the process of building a house, and then Toronto, where he opened his first pop-up store. More are to come in 2017 in terms of self-branded stores. Hong Kong will be next in March, followed by Taipei, Singapore, Tokyo, Milan, Ibiza and Napoli. “It’s going to be a big year with the book and the documentary and the opening of the stores,” admits Burlon.

As we compare price tags on his range of T-shirts, Burlon throws stats and figures at me: sales are up 20 per cent per season; 400 retailers around the world; an annual turnover of $15 million. It’s deeply impressive for a man who has built a streetwear business based on authenticity, social media and the connections he built over 20 years of networking and clubbing.

“I always had a sense of fashion or beauty,” he adds. “The niche was my audience. I was already connected to certain types of designers too, and when you’re growing up and you look at those people you feel more related to – conceptual designers, independents, etc – your aesthetic grows. It’s like watching a certain type of movie. You kind of build your style.

“And I learned so much from experience too. I mean today, after 20 years, we are doing a book with Rizzoli about my life, we’re doing a documentary about my life; there are so many kids studying my story at university and I do speeches in front of 600 people. Because it’s not just, ‘Ah, the kid with no money.’ It’s not just a fairy tale. It’s a very interesting marketing story. It’s how I started using social media to sell my stuff, to communicate, to tell my story.” Asked what the essence of that story is, Burlon says: “It’s just real. And people feel that. That’s the key.” 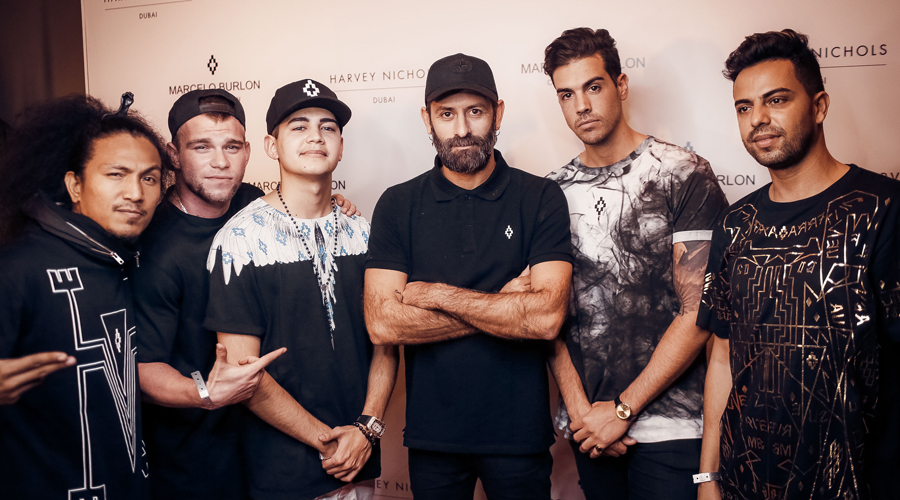 Because we’re in Dubai gold is the colour of choice, with Harvey Nichols’ capsule collection the first of its kind for the Dubai branch of the luxury department store. It will no doubt find a ready audience, with hip-hop artists such as Pusha T and Drake already wearing Burlon’s clothes. In fact, it was Pusha T’s wearing of one of Burlon’s first ‘Wings’ T-shirts in Miami and its subsequent reposting on Instagram that kick-started Burlon’s social media odyssey.

“It’s not like the old school anymore where everyone is, ‘Woh! fashion.’ We’re doing clothes, we’re selling a lifestyle. It’s not just about this, it’s about music, it’s about art, it’s a community,” says Burlon. “And my roots are important to me too. I love Argentinian folk music, I love Devendra Banhart. He did this tattoo on me and I did one on him. That’s the Argentinian side of me. The roots, the earth, mother nature, you can see it in my collections. My family moved back to Argentina three years ago, my best friends are there, I’m building a house – a farm – in Patagonia. Even if I come from electro house music, there’s another side which is also me.”

All this success, though, has come at a cost. “Some people, because I’m not a designer, they don’t get it,” Burlon says. “I’m the new thing. I’m bringing a new energy, a new spirit. I come from clubbing and many, many people who used to be my clients are now my competitors and they don’t get it. A writer once said that I had more success in two years than an entire designers’ generation in Milan. You know why? Because they’re too serious. They’re taking everything too seriously. I’m super free and so many are uptight. But you know, so what. Just come to the dance floor.”

– For more about the UAE’s lifestyle, news and fashion scene straight to your newsfeed, follow us on Facebook