The Gospel According to Manny 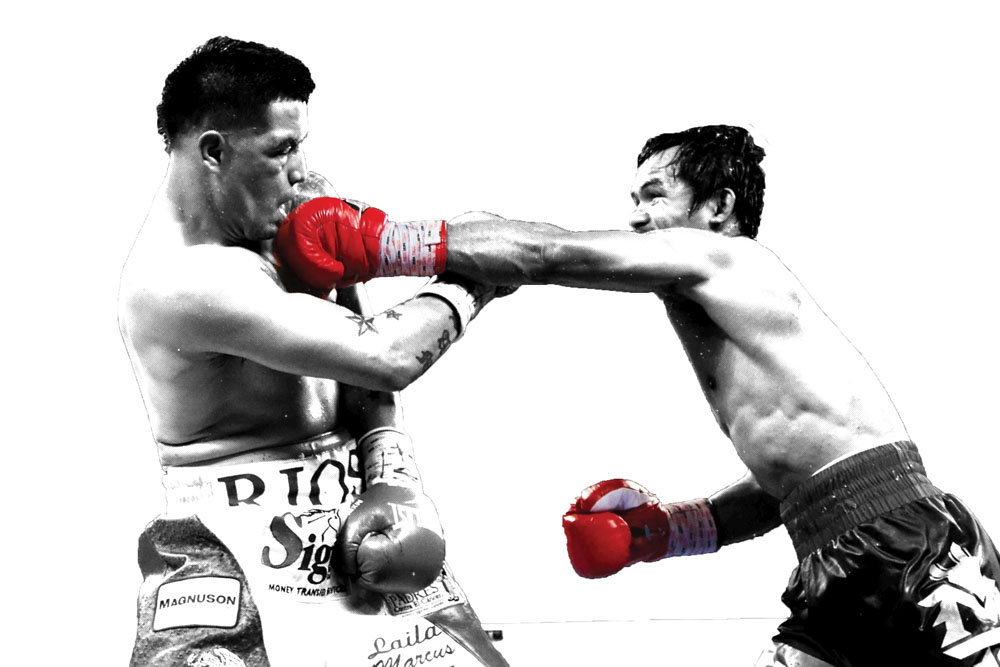 He wasn’t even meant to be there, Manny Pacquiao that is, holed up in Miami and stuck twiddling his thumbs, with an equally disgruntled entourage, as events spiralled out of his control. But there it was, an unequivocal fact: the storms that had battered and bruised the US throughout January this year were keeping him well and truly grounded, and the connecting flight he needed to get back home to Manila was rapidly becoming a distant memory.

“Living on the street was dangerous but sometimes you have no choice but to keep going – when you’re talking about survival, there’s really no choice to make”

You could say that it was Miss Columbia’s fault too, the woman who Pacquiao had just helped crown winner at the Miss Universe pageant – the reason he was in the US in the first place – but this wasn’t about blame, at least not anymore. It was about an alignment of stars. That Pacquiao was stuck in Miami, that the Heat were playing the Milwaukee Bucks at basketball on the same night and that, there, sitting on the opposite side of the court was the unbeaten world champion and greatest pound-for-pound fighter on the planet, Floyd Mayweather Jr.

Cue a half-time meet – the first time they’d ever looked squarely into each other’s eyes – throw in an hour-long conversation after the game at Pacquiao’s hotel room and there you have it. All of a sudden, a fight five years in the making, potentially the greatest fight of all-time, was on. Later that evening, once word got out, the internet broke.

As with most things in modern day boxing, it began with Muhammad Ali. The 1970s spawned the Super-Fight, and it followed a rather simple format: Catchy title, impressive location and two fighters at the peak of their powers. While many would cite Ali’s 1974 Rumble In The Jungle with George Foreman as the one that started it all, you actually need to go back three years earlier to the original Fight Of The Century for the truth. Ali and Joe Frazier, two unbeaten fighters who were social and religious polar opposites stepped into the ring and divided an entire nation.

Ringside seats that night were going for $150 (around $860 today), and the guest list read like a Vanity Fair Oscar party. The artist LeRoy Neiman painted them as they fought, Burt Lancaster was the commentator and Frank Sinatra couldn’t even get a seat – he had to settle for a press credit and take snaps for Life magazine just to get through the door.

Once the dust had settled on Frazier’s victory that night, the pattern was set. The marketing men zoned in and a promoter named Don King prepared to get rich quick. Countless fights followed and pay-per-view millions stacked up, but not since Ali was on the card has a fight been as eagerly anticipated as Mayweather vs Pacquiao.

For most the 38-year-old Mayweather is a cert. They cite his unbeaten record (47-0), that he has the best defence out there (a fact), and that he’s a guy who chooses fights with his head, not his heart. Floyd isn’t there to lose – hence the fact that this fight didn’t happen five years ago, when both were at their peak.

For the 36-year-old Pacquiao, however, it’s more of a calling; he’ll get in the ring with anyone. There’s a story surrounding his fight with Miguel Cotto in 2009 where his team didn’t even want it to go ahead, fearing their man would struggle with the naturally bigger guy – anything over 140 pounds was considered too much. Eventually the fight was arranged and after Manny had destroyed his opponent, as he so often does, he would tell people that he fought him because he was “curious” and that he wanted to “feel his power, just for himself”. Pacquiao fights like a fan would want him to; it’s almost an out-of-body experience. “Everything is in God’s timing,” he explains to Emirates Man from the Wild Card Boxing Club in Hollywood. “If he wants to open opportunities for me, he will”.

Brought up in General Santos City, Pacquiao’s early life was one of crushing poverty. He left school as his mother struggled to cope with five children on her own and by the age of 14 he’d moved out altogether – to save her the expense of looking after him.

“I did everything I could to survive on the streets as a child,” he says. “From selling donuts to fighting in underground boxing matches. It teaches you a work ethic. It was hard and dangerous but sometimes you have no choice but to keep going – when you’re talking about survival, there’s really no choice to make.”

The Philippine Amateur Boxing Team eventually offered him a way off the streets and his life would never be the same. From surreptitiously adding stones to his pockets to make fighting weight, to the tragic death of fellow boxer Eugene Barntag that would be the final push in his turning professional – the skinny kid from GenSan went on to become one of the greatest boxers of his generation. But one name was set to niggle away at the proud record of the eight-division world champion: Floyd Mayweather Jr.

There are five years’ worth of column inches dedicated to how a fight with Mayweather was never going to happen. Scheduled for 2009, plans were thrown into disarray over who was getting paid what and, famously, over blood tests leading up to the fight. It was done, Finished. Not a chance.

Time moved on, both fighters fought. Pacquiao lost (twice), he went into government – it’s where he’ll be post-boxing (“if you’re not aiming to help the people and make their lives better, what’s the point?”). Then suddenly, it was back on, but Mayweather wanted more money this time. The blood tests were an issue, again. The fight was off, again. Then came that chance meeting in Miami.

“I’m not sure I look at it as a delay,” says Pacquiao in typically philosophical mode. “I prefer to think of it as a fight years in the making, He didn’t want to fight me, but now that’s been sorted.” On that last point he’s got Mike Tyson in his corner.

“Floyd’s definitely been ducking the fight all these years,” says Tyson. “As world champion you should want to fight the best people out there, to know that you’re the best, Floyd hasn’t done that. One thing I know for sure is that he’s going to get hit harder and more often by Manny than in any fight he’s had before.”

It’s an opinion that puts Tyson firmly in the minority, despite the titles, natural ability, speed and passion that Pacquiao brings to the table. Most think that Mayweather’s defence is just too good, even for a rabid puncher like Pacquiao.

On the other side of the coin, Mayweather is the man with everything to lose. Get whupped on May 2 and that’s how his career might just be remembered – despite all that preceded it. It’s a risk from a guy who rarely takes them and despite the fact that both are a little passed their prime it’s why this fight is so damn exciting. It’s career defining for the only two superstars left in boxing.

“I’m realistic,” says Pacquiao. “I know that retirement isn’t far away, but I’ve always believed I can win this fight, and I still do. There’s no getting away from the fact that Floyd is an exceptional fighter, but we have a plan and tactics that we think can defeat him. It would be the pinnacle of my career, for sure, but also the pinnacle for him too, if he wins.”

As the sport’s biggest names and finest minds argue long into the night over who will end the evening with his arm raised aloft, all we can do is wait and wonder. News leaks from each camp on a daily basis – Floyd’s battering his sparring partners, Manny’s never looked sharper or moved faster. Mayweather rarely gets hit, Pacquiao rarely stops punching. While this fight might not offer the promise it would have done five years ago, it could well be the last of its type and makes it essential viewing, whether you like boxing or not.

“The passion is still there,” says Pacquiao. “I’ve wanted this fight for so long, even my kids want me to fight him – and while the hunger is still there, I will fight.”

It seems that, despite the fame and riches, the street kid from GenSan City hasn’t really changed that much at all. Pacquiao knows how to survive, at all costs.

Is the NFL racist?