Over the past 12 months, more attacks were carried out with Kalashnikov-type assault rifles than any other weapon. Just why is Mikhail Kalashnikov’s invention – the infamous AK-47 – the weapon of choice for armies and terrorists? 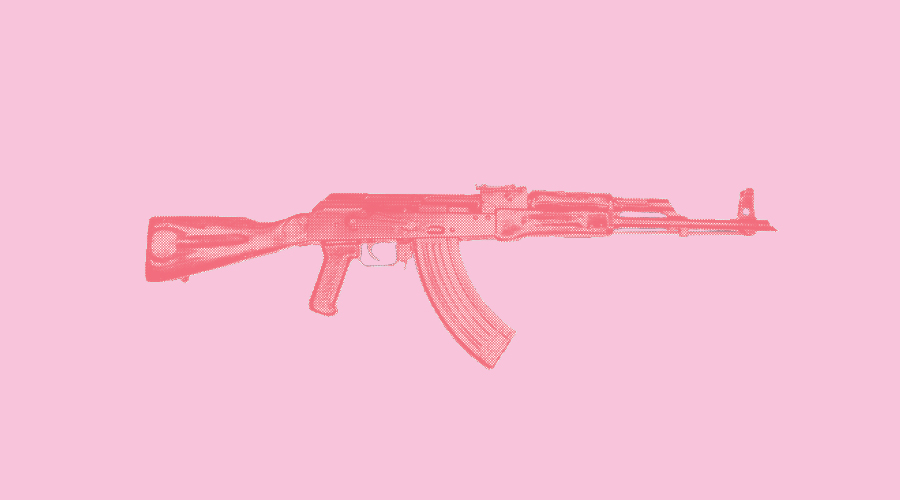 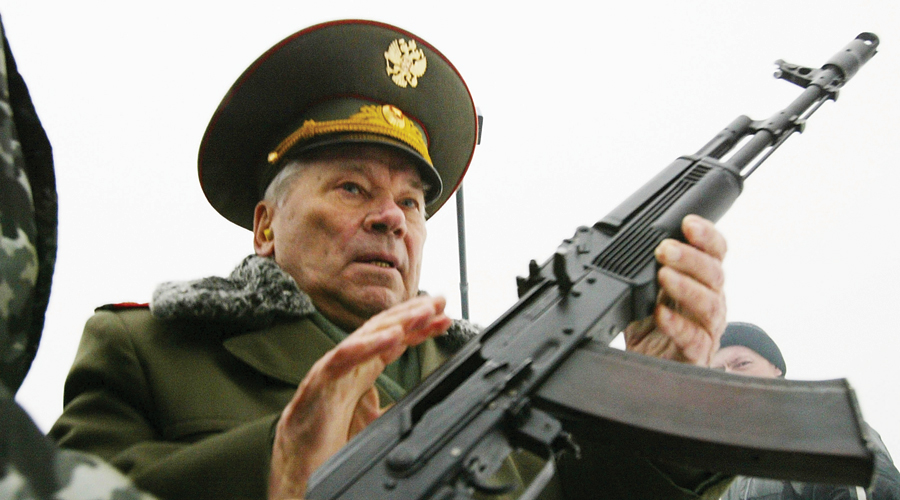 Mikhail Kalashnikov lived a very long life. As the years stacked up, the once defiant Russian began to show traces of regret at having invented a weapon that shortened the lives of so many. He died in 2013, aged 94. In a letter to the head of Russia’s orthodox church, written just before his death, he sounds like a haunted man. We can only imagine by what ghosts: the gun he designed, the AK-47, has killed far more people than any other firearm.

“I keep asking myself the same unsolvable question: if my assault rifle took people’s lives, does it mean that I, Mikhail Kalashnikov, son of a farmer and an Orthodox Christian, am responsible for people’s deaths?”

Over the past half century, the AK-47 in various guises has featured in more than 50 large armed conflicts. There may be as many as 200 million around the world, used to kill an estimated 250,000 people every year. Over the past 12 months, the Kalashnikov has written a new chapter in its long and dark history.

Al-Hayat Media Centre, 2014. This is the name of ISIS’ new foreign-language media department, set up to target western audiences. The FBI calls the militant group’s social media campaigns, which broadcast in more than 20 languages, “unusually slick”. The organisation uses these tools to intimidate and coordinate, to recruit and radicalise. These campaigns may be smarter and more coherent than those that came before them, but the iconography is the same – the hoods, the black flags, the orange jumpsuits and the AK-47.

Michael Hodges wrote AK-47: The Story Of The People’s Gun. “The rise of ISIS as a media presence has re-confirmed the AK’s power as a brand signifier for certain attributes. This means that, more than ever, holding an AK makes you a jihadi.

At the turn of the century, the bomb, not the bullet, was the terrorist’s weapon of choice. But explosive devices have been replaced in recent years by the more readily available AK-47. In Europe over the past 12 months, more attacks were carried out using Kalashnikov-type assault rifles than any other weapon. Charlie Hebdo, Sousse, Garissa, Tunis, Copenhagen, Paris… these and many more smaller or foiled attacks all involved the gun.

“The big change since I wrote the book,” Hodges says, “is the Syrian civil war. This has concentrated thousands of AKs in one area to terrible effect, and, of course, they are leaking out. I should also mention the increasing traffic of AKs through the Balkans to Western Europe.”

Germany, 2015. Authorities stop a man named Vlatko Vucelic on a motorway. In the boot of his car, as well as a revolver, two handguns, two grenades and 200g of TNT, are eight Kalashnikovs. Vucelic isn’t linked to any terror plots. Nor is he a wealthy arms dealer. He doesn’t even have a criminal record. The Montenegrin farm worker is a very small cog in a very big machine that sees guns trafficked from Montenegro, through Croatia, Slovenia, Austria and into southern Germany. Vucelic, for his part, would have been paid very little. 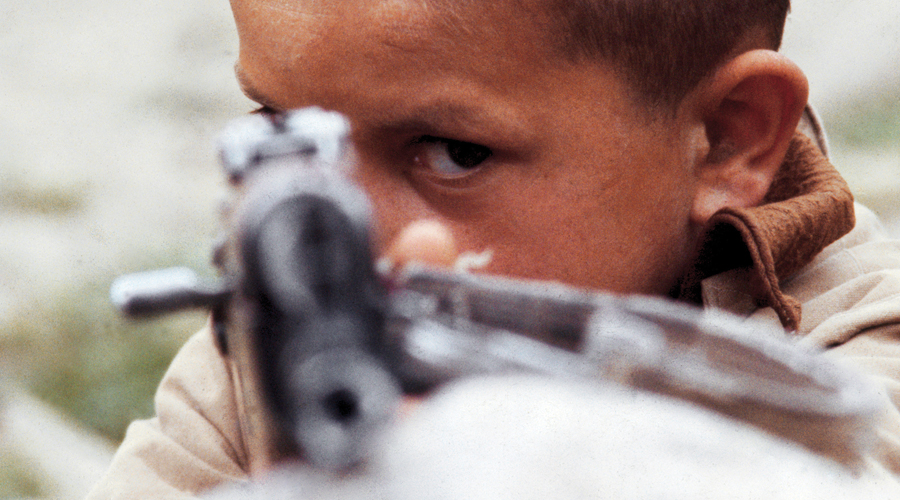 At the end of the Balkan wars, many soldiers took their guns home. There are hundreds of thousands, possibly more than a million, of these guns in Bosnia alone. It’s from this region that the guns used in the attacks in Paris are thought to have come.

More than a million new AKs are made every year. A well-maintained Kalashnikov can last about 50 years. One that’s maintained poorly would give at least 20 years of service. A magazine that worked in a 1949 AK-47 will work in an AK-47 manufactured yesterday. Experts can take some deactivated weapons – which you can buy legally online – and reactivate them. It’s believed the guns used in the Charlie Hebdo attacks in Paris were bought in Slovakia as decommissioned collectors’ items.

The UN and other organisations know little about the lifecycle of these weapons, particularly how they end up in the hands of Islamist extremists. Suppliers could be one-man operation and therefore difficult to track down.

According to the 2015 EU terrorism situation and trend report, firearms have become the most prevalent form of weaponry in terror attacks in the EU. But it was not until 2013 that Europol, the European Union’s law enforcement agency, set up a team of dedicated firearms experts. The sheer number of AKs in global circulation, both legally and illegally, makes theirs a thankless task.

Born in 1919, AK-46 creator Mikhail Kalashnikov grew up in a peasant family and received no formal education. As a boy, he had a gift for mechanics, but dreamed of becoming a poet. Lying in a hospital bed, after being wounded in 1941 while serving in one of the Russian army’s tank units, he came up with an idea for a new kind of automatic rifle. The gun that came from this idea won a Soviet competition in 1946. Within three years, Kalashnikov’s most famous invention, the AK-47, had become the standard issue assault rifle of the Soviet Army.

Today there are around 200 variations of the gun. They are manufactured legitimately in more than 30 countries. China exports the majority of its guns to African states. Here, underpaid soldiers often sell them on, or governments send them to rebel forces in other countries. That’s the ‘best thing’ about AK: from Siberia to the Sahara, sub-zero to sweltering temperatures, it works pretty much anywhere, and continues working for a long time.

Vietnam, 1970. The US army takes six captured Kalashnikovs into a laboratory for modification, having previously mocked the design for being rudimentary.

During the Vietnam War, Americans would throw away their M-16s – ostensibly a sophisticated weapon – to steal AK-47s from dead Viet Cong guerrillas. Where the US guns failed – in the heat and the humidity, in the thick of the jungle – the Kalashnikov triumphed.

Comparatively, the gun doesn’t fire that far or that accurately. You can’t really hunt or shoot for sport with it. But it’s easy to use and reliable, a machine perfect for doing lots of damage to lots of people very quickly.

A lever on the right-hand side of the stock controls the weapon. With the lever in the right place, your gun’s safe. It won’t fire if you accidentally pull the trigger. Two clicks down, it’ll fire a single shot at a time. One click down and it’s a machine-gun, firing automatic bursts that pack a significantly bigger punches than most standard army weapons. The gun is so simple, a child could use it.

Mozambique, 1975. The Mozambique Liberation Front celebrates independence at the end of a decade-long war with Portugal by raising a new flag. Emblazoned in the corner of this flag, beside an open book and a farming tool, is a Kalashnikov.

Kalashnikovs flooded into Africa when anti-colonial campaigns became tied up with Cold War politics. The USSR, China and North Korea sent millions of AKs to the continent, so many that in Uganda an animation plant was set up to supply the demand for bullets.

Ever since the guns first came to the continent, Uganda has been embroiled in one war or another. During that time, various factions armed, and continue to arm, thousands of child soldiers, boys and girls, mostly with AK-47s. In the ‘bush war’ of the 1980s, the army carried out mass killings of non-combatants using Kalashnikovs. Hodges wrote that, in parts of Africa, the gun “moved from being a tool of the conflict to the cause of the conflict”. 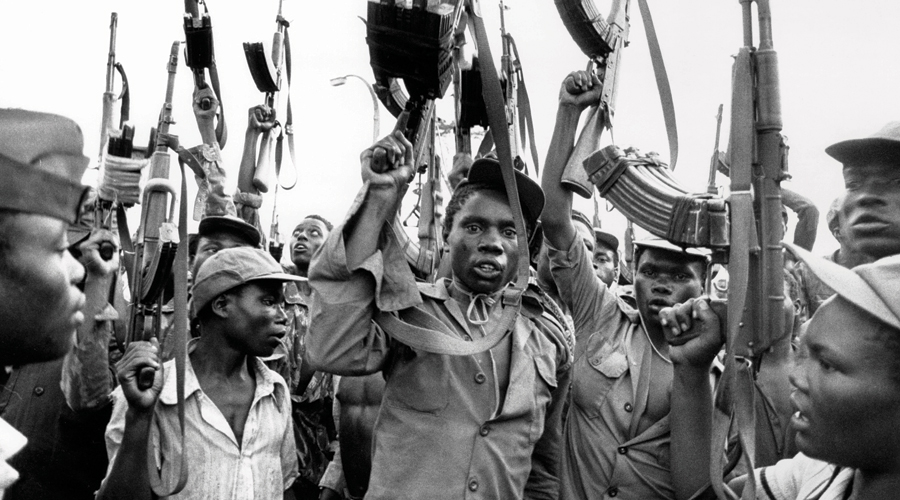 Peace didn’t last long in Mozambique. By 1992, at the end of a protracted civil war, the country was home to an estimated seven million automatic weapons. And yet a Kalashnikov still sat in the corner of its flag. For a while, it wasn’t uncommon for a newborn Mozambican to be named ‘Kalash’. As much as it is a symbol of oppression to some, it’s a tool of liberation to others.

Budapest, 1956. Clothes dirty and tattered, face older than his 22 years, eyes slit with purpose, József Tibor Fejes poses for photograph. On his head he wears a bowler hat. Slung over his shoulder he carries an early AK-47. The rebel picked up the gun left behind by a fleeing Soviet soldier and pointed this tool of the police state right back at its makers. In his book The Gun, CJ Chivers describes Fejes as “the first known insurgent to carry an AK-47”, adding that “the Hungarian Revolution marked the AK-47’s true battlefield debut”.

In Latin America and Southeast Asia, in the West Bank and Gaza, during fights for freedom fought all over the world, the AK-47 became a kind of talisman, a weapon that levelled the playing field and helped the people take back power. But would the world have been a better place without it? If anyone kept score, it was Mikhail Kalashnikov.

Suhl, 2002. Still more than decade from death, an 82-year-old Kalashnikov says: “I’m proud of my invention, but I’m sad that it is used by terrorists. I would prefer to have invented a machine that people could use and that would help farmers with their work – for example a lawnmower.”

The Russian was in Germany to open an AK-47 exhibition in a weapons museum. Kalashnikov didn’t profit directly from the gun that carries his name, but he lived a good life because of it and continued to design weapons until he died.

At the end of his life, Kalashnikov appeared contrite. Any debate about guns is bigger than one man. His invention was merely an instrument in the hands of those who used it. But at 30 rounds per clip, it could only ever play one tune.

Ultimately the answer to his own question, whether or not he was responsible for the millions of lives lost to his gun – seemed not only “unsolvable” but irrelevant: “The pain in my soul,” he wrote in his last letter, “is unbearable.”