As the fourth season of House Of Cards premieres, Kevin Spacey, one of the most admired actors of his generation, speaks to Emirates Man about the TV series – and what happens when life begins to imitate art 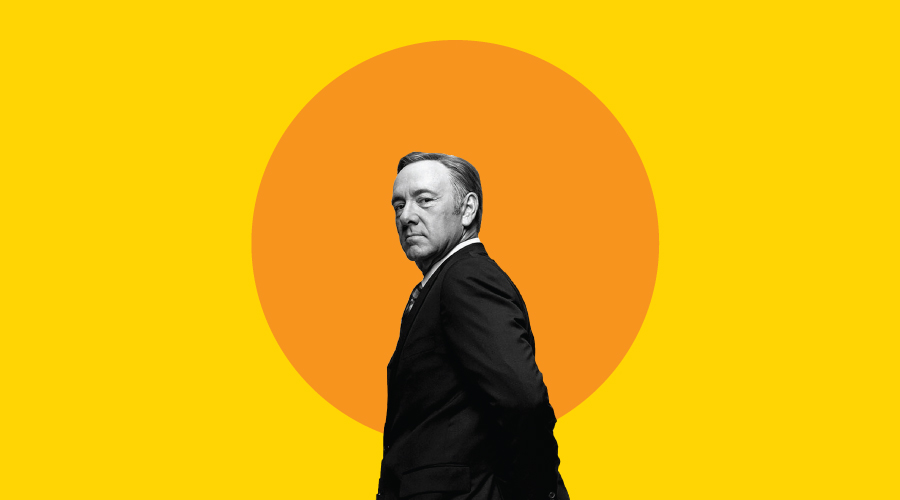 Kevin Spacey is the kind of man who strikes fear into interviewers. His roles – from Verbal Kint, the fabulist crook who confounds his police interrogators in The Usual Suspects, to his cruel, quick-witted Richard III on the London stage, to Frank Underwood, his super-Machiavellian politician in the TV drama House Of Cards – suggest a master obfuscator. His actual track record with the press is no more cheering. A clip on YouTube of one interview is headlined: “Mark Lawson gets owned by Kevin Spacey.” Then there was the poor hack who arrived with a sheet of questions. Spacey snatched it, scrunched it into a ball and threw it across the room.

Mercifully, Emirates Man seems to have caught him on a good day. Sure, there’s some mid-level slipperiness but no real sense that Spacey wants to toy with us in lion-and-gazelle fashion. He sweeps into the central London hotel room we’ve arranged to talk in an immaculate blue suit and tie with pin; tanned, compact, of average height, with a steady, brown-eyed gaze and a presidential haircut that we’re nowhere near brave enough to ask is a toupee.

When one of his co-stars from House Of Cards interrupts us on the way back from the toilet, Spacey turns and smiles: “Stop your visits to the bathroom!” There’s that distinctive voice, somehow both monotone and musical, and with a devastating change of inflection. Later we’ll be treated to two of his killer impressions: his friend Bill Clinton and his late mentor Jack Lemmon, who noticed him at a theatre workshop when he was 13 and told him he was born to act.

The only time Spacey really bares his teeth is when we ask whether he earned $20 million from House Of Cards, as reported. “That’s like walking into someone’s house and saying, ‘How much did you pay for your house?’” he snaps. “I don’t discuss my finances with a journalist.” He says “journalist” a bit like Lady Bracknell says “handbag”. Hope you don’t mind us asking, we say. “Well, it’s rude. But I’m used to you guys being rude.” 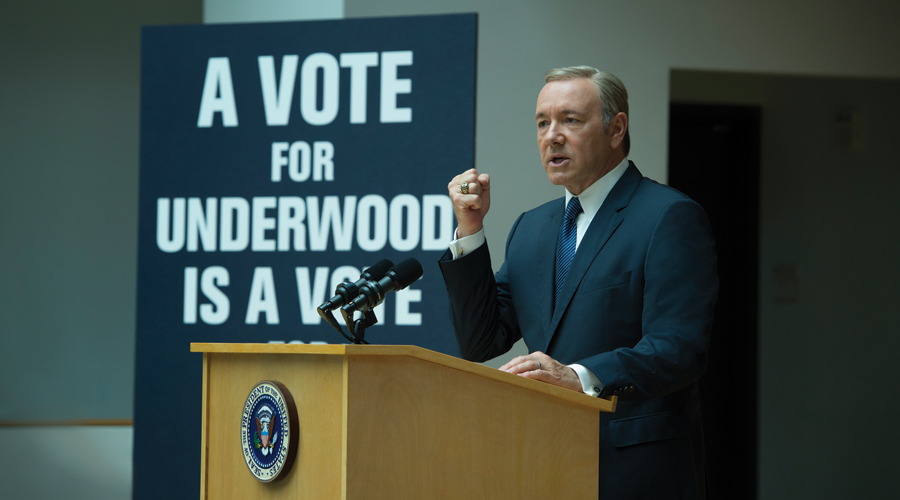 Even this doesn’t puncture his mood. The 55-year-old has good reason to be upbeat. He belongs to an elite group of actors who have won the highest honours for performances on screen (Oscars for The Usual Suspects and American Beauty), television (a Golden Globe for House Of Cards) and stage (a Tony for Lost In Yonkers and an Olivier for The Iceman Cometh).

And then there is House Of Cards, whose fourth season is just about to premiere on OSN in the Middle East, and Netflix around the rest of the world, at the end of March. Made by Netflix, the show is the most globally popular on the online streaming service and, with the elections in the US, is going down especially well with politicians. The Clintons, like the UK’s Prime Minister David Cameron, are big fans (as is Woody Allen, after Spacey sent him the series).

Bill and Hillary, who know a thing or two about spotlights, “love it”, Spacey says. “They find it very enjoyable. I’ve been making a joke – Bill didn’t really say this but I told him I said it and he was OK with it.” Spacey slips into his sleepy southern Clinton voice: “I love that House Of Cards. It’s so good. Ninety-nine per cent of what they do in that show is real. And the one per cent they got wrong is you could never get an education bill passed that fast.”

Given Frank’s previous misdemeanours, few of them trivial, we wondered if the programme-makers feel the need to pull back a bit?

“Are you saying we’re trying to temper it down?” Spacey shoots back. “I don’t think we give a rat’s a**.” Rest assured, antiheroes are still the order of the day. As, it seems, are steely, ambitious, impeccably coiffed women. Does Hillary Clinton see herself in Claire, as many claim? “I have not had those kind of conversations with them,” Spacey smiles. “We haven’t based our characters on anybody.”

Come off it, I say, Petrov, the fictional Russian president whom Underwood meets (along with real-life members of Pussy Riot) in the third season, has more than a whiff of Putin about him. “It may well be, but I don’t create this stuff,” he says. “My job is just to serve the writing.”

This is slightly disingenuous, given his influence as executive producer. Spacey admits that he joins the show-runner Beau Willimon, Wright and his fellow executive producer David Fincher in “broad stroke conversations about the overall arc of the season”.

The room we’re in looks over Whitehall, stalking ground of Underwood’s British forerunner, Francis Urquhart (same initials – geddit?). Michael Dobbs, creator of the original House Of Cards, said recently that the late Ian Richardson, who played Urquhart, came to loathe the role. You sense that Spacey feels differently about Underwood: “No, I’m having the time of my life.” 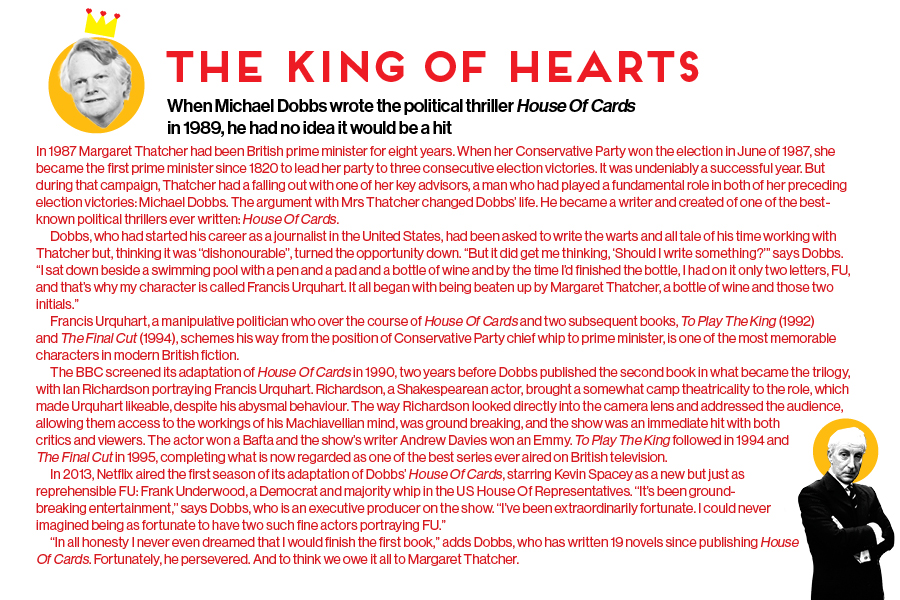 Spacey won’t talk about specific plot points (“I can’t be the spoiler-in-chief”) but admits the show has been spookily prescient: “What’s been really quite remarkable is that, about two or three months after we shoot it, and five or six months before it’s going to air, something that is very close to what we’ve tackled happens. And we all go: ‘They’re gonna think we ripped this from the headlines.’ We didn’t!”

Does the series imitate life elsewhere? An interviewer recently tried to link Underwood’s hatred for his alcoholic father and Spacey’s frustration with his own dad, a technical writer whose volatile employment led the family to move 11 times by the time he was 12.

Having been pulled all the way from his native New Jersey to Los Angeles, Spacey went back east to study at Juilliard in New York before making his breakthrough in 1986, alongside Lemmon, in a Broadway production of Long Day’s Journey Into Night. He insists he bears no lingering resentment towards his father for his nomadic youth: “What I said was I was mad at my father at one particular moment in my life because we moved around a lot as kids. I had a great relationship with my father and whatever issues we may have had we long resolved them. People just spend their time doing bulls*** pop psychology.”

Frank and Claire have put their careers before having kids – does Spacey relate to that? “Er, no.” So he’s never wanted children? “I have wanted to have children. I do want to have children.” So it’s still on the cards? “It’s early!” As for with whom – who knows? Spacey doesn’t talk about his private life. There was a reported former relationship with Dianne Dreyer, a script supervisor whom he thanked in his acceptance speech for American Beauty. That hasn’t prevented persistent rumours about his sexuality, despite his flat denial in an interview in 1999.

Finishing at the Old Vic might give him time to start a family – he seems to have precious little at the moment.

Does he binge on a TV series in the now popular fashion? “I’m not a binger. I don’t know how people do it. I hear people say that they stayed home all weekend and watched two seasons of the show: a) I don’t have time for it, and b) I’d fall asleep.”

He will admit to being a fan of The Sopranos, which paved the way for House Of Cards by showing that there was an appetite for deeply flawed protagonists. “In the past 15 years we’ve had this remarkable runway of extraordinary antiheroes,” he says. “I think audiences have demanded it. They don’t want cookie-cutter stuff.”

April sees the release of Spacey’s film role as another great antihero – and also another president – in Elvis & Nixon, an account of the meeting in 1970 between the King and Tricky Dicky. “It was interesting to play a Nixon not saddled by Watergate,” he says. “It’s a hysterical story, just to the left of Dr Strangelove.”

Last year saw him receive a special Oliver award for his work at the London theatre the Old Vic, where was he was artistic director before handing over to Matthew Warchus, who, he says, “certainly proved himself as one of the finest directors we have”. He hopes to retain close links with the theatre. “I love England a great deal and there’s nothing I can say about it that would be negative.” When he moved to London, he says, “people thought I was out of my mind. Certainly in America they thought I was crazy. I don’t look so crazy now.”

Changing the Face of TV satire