Bernie Sanders is calling for a political revolution in the US, one that combats the influence of wealthy campaign contributors and the growing level of wealth and income inequality. Is he right? 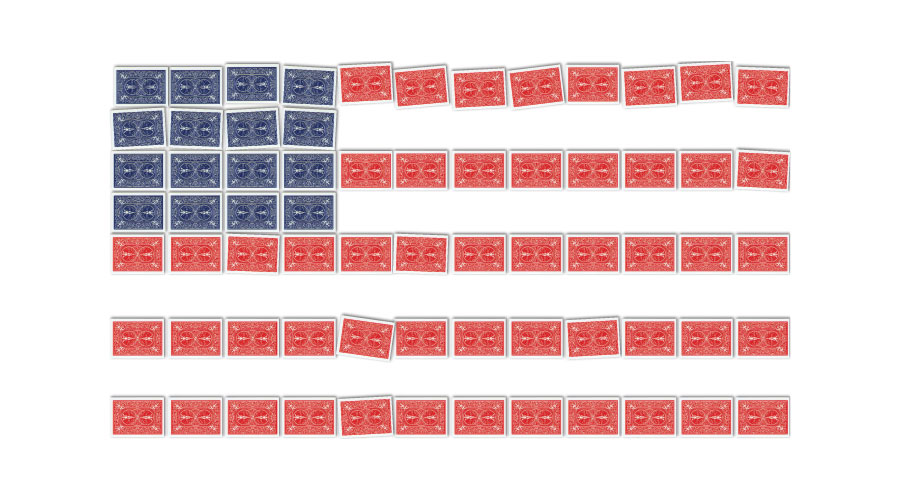 “My dad came to this country at the age of 17 from Poland,” said presidential candidate Bernie Sanders during his closing statement at the fifth Democratic debate. “Didn’t have any money, couldn’t speak English. He died pretty young, and I think it would have been beyond his wildest dreams to see his son up here on this stage today running for president. I love this country, and my dad loved this country, and he was the most proud American because of what it gave him in terms of raising his family – even though we never had much money. 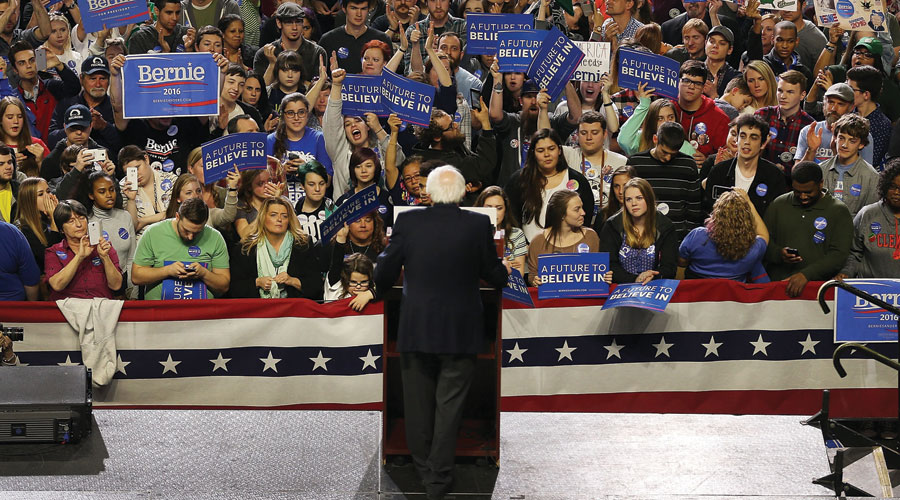 “But today in America we are the only major country on Earth that doesn’t guarantee healthcare to all people, that doesn’t guarantee paid family and medical leave. We have the highest rate of childhood poverty of almost any major country on Earth. We are seeing millions of families unable to send their kids to college in the United States of America. I’m running for president because I believe it is just too late for establishment politics and establishment economics. I do believe we need a political revolution, where millions of people stand up and say loudly and clearly that our government belongs to all of us and not just a handful of wealthy campaign contributors.”

Sanders, who faces Hilary Clinton in the race for the Democratic presidential nomination, is a revolutionary in the making. A democratic socialist, an idealist, an ageing hero, and a remnant of the 60s protest movement, he is also an anomaly: a solitary figure attempting to stand on the left within an American political system that has swung almost entirely to the right.

“Sanders is pretty much an old-fashioned New Dealer, whose views would not have surprised Eisenhower,” says Noam Chomsky, a political theorist and professor of linguistics at the Massachusetts Institute of Technology. “The fact that he’s considered ‘radical’ is a comment on the shift to the right and towards the undermining of democracy during the neoliberal period.

“Half a century ago a standard quip about the US political system was that the US is a one-party state – the business party – with two factions: Democrats and Republicans,” adds Chomsky. “That’s now only partially true. It is still a one-party state – the business party. But there’s only one faction – moderate Republicans, now called ‘Democrats’. The Republican Party has simply drifted off the spectrum. They are described accurately by the highly respected conservative political analysts of the right-wing American Enterprise Institute, Thomas Mann and Norman Ornstein, as a ‘radical insurgency’ that has largely abandoned parliamentary politics.”

It is this ‘radical insurgency’ – “ideologically extreme, scornful of facts and compromise, and dismissive of the legitimacy of its political opposition”, as Mann and Ornstein wrote – that Sanders is attempting to combat. At 74 he is perhaps too old to be taking on such a task, yet his policies focus on the injustices of modern America, the “grotesque and growing level of wealth and income inequality”, the immorality of corporate influence, and the rapid slide towards oligarchy. Yet he will, in all likelihood, be defeated by the very people he campaigns against – the rich and the powerful – with the stranglehold that money and big business holds over American politics all but complete.

“The judges appointed under Reagan and Bush have lifted any legal limitation on the influence of private money in politics, which greatly complicates the task of candidates like Sanders,” wrote French economist Thomas Piketty in Le Monde. He is not alone in his appraisal of Sanders’ prospects. Former president Jimmy Carter, speaking to the BBC early last month, said US politics had become corrupted by billions of dollars of campaign financing following the 2010 Citizens United court decision, which he said essentially legalised bribery. For American politics, Citizens United was a landmark decision.

“The erroneous ruling of the Supreme Court, where millionaires, billionaires, can put in unlimited amounts of money, give legal bribery the chance to prevail, because all the candidates, whether they are honest or not, or whether they are Democratic or Republican, depend on these massive infusions of money from very rich people in order to have money to campaign,” said Carter. “As the rich people finance the campaigns, when candidates get in office they do what the rich people want. And that’s to let the rich people get richer and richer and the middle class get left out. All the statistics show that the middle class are stagnant or going down in their income for the work that they do.”

The Citizens United Supreme Court case, which equated campaign spending with free speech, enabled corporations, unions and individuals to spend unlimited sums on electioneering. It gave them, in effect, carte blanche to attempt to impact the outcome of US elections. Why? Because corporations are deemed to have the same rights as people, hence the right to unfettered free speech and the right to be allowed to spend as they wish on political campaigns. 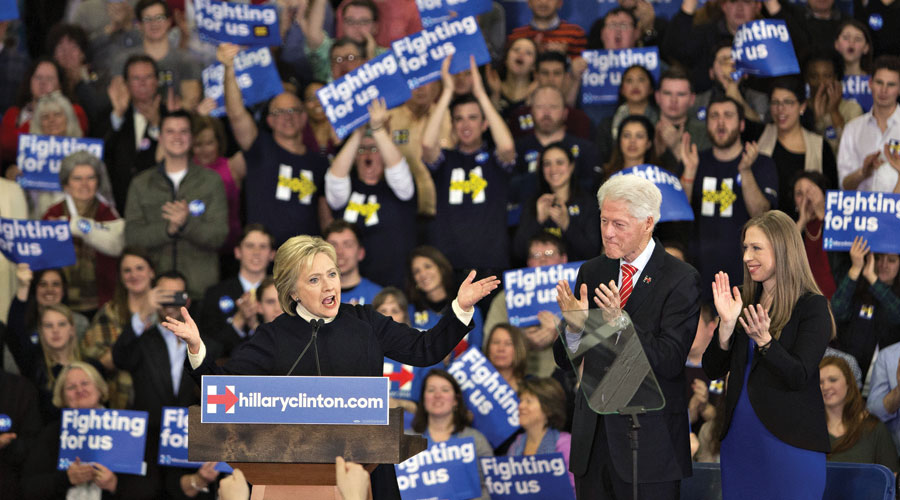 Speaking shortly after the decision was made, President Barack Obama said the ruling gave “special interests and their lobbyists even more power in Washington – while undermining the influence of average Americans who make small contributions to support their preferred candidates”. He later added that it struck “at our democracy itself” and concluded that he could not “think of anything more devastating to the public interest”.

Hence, for Sanders, the defining political issue is money.

Following a further ruling by the Supreme Court in April 2014 – which struck down overall limits for contributions from individuals to candidates and political parties – the outlook has become even bleaker, as Gary Younge, writing in The Guardian at the time, explained. “In 2010 just 0.01 per cent of Americans accounted for a quarter of all the money given to politicians, parties and political action committees,” he wrote. “If anything this makes the loosening of donation rules more damning, not less. For at a time of escalating economic inequality and declining social mobility, the pool of politicians’ paymasters will shrink even further.

“In a system where money is considered speech, and corporations are people, this trend is inevitable. Elections become not a system of participatory engagement determining how the country is run, but the best democratic charade that money can buy. People get a vote; but only once money has decided whom they can vote for and what the agenda should be. The result is a plutocracy that operates according to the golden rule: that those who have the gold make the rules.”

Plutocracy? Oligarchy? Neither is a development worth shouting about for a country that prides itself on its alleged democracy. Either way, the end result, if you believe American environmentalist and democracy leader Phil Radford, is a “legalised system of corruption through money in politics”.

The impact has been huge. Political scientists have consistently shown that the policy preferences of the extremely wealthy prevail over all others. In Testing Theories of American Politics: Elites, Interest Groups, and Average Citizens, Martin Gilens and Benjamin Page stated that: “When the preferences of economic elites and the stands of organised interest groups are controlled for, the preferences of the average American appear to have only a minuscule, near-zero, statistically non-significant impact upon public policy.”

They continued: “What do our findings say about democracy in America? They certainly constitute troubling news for advocates of ‘populistic’ democracy, who want governments to respond primarily or exclusively to the policy preferences of their citizens. In the United States, our findings indicate, the majority does not rule – at least not in the causal sense of actually determining policy outcomes.

“When a majority of citizens disagrees with economic elites or with organised interests, they generally lose. Moreover, because of the strong status quo bias built into the US political system, even when fairly large majorities of Americans favour policy change, they generally do not get it.”

In 2013, the American Economic Association asked the question, why hasn’t democracy slowed rising inequality? In an article in the Journal of Economic Perspectives, it noted that during the past two generations, “democratic forms have coexisted with massive increases in economic inequality in the United States and many other advanced democracies”. Why? Firstly (amongst five possible reasons cited), because “both Republicans and many Democrats have experienced an ideological shift toward acceptance of a form of free market capitalism that offers less support for government provision of transfers, lower marginal tax rates for those with high incomes, and deregulation of a number of industries”. But also because “the rich have been able to use their resources to influence electoral, legislative, and regulatory processes through campaign contributions, lobbying, and revolving door employment of politicians and bureaucrats”.

It is therefore perfectly legitimate to ask whether the interests of the economic elite are partly responsible – if not wholly responsible – for the entire US political spectrum shifting to the right. Which in turn has led to the complete disappearance of the American left and the transformation of the Republican party into a ‘radical insurgency’. 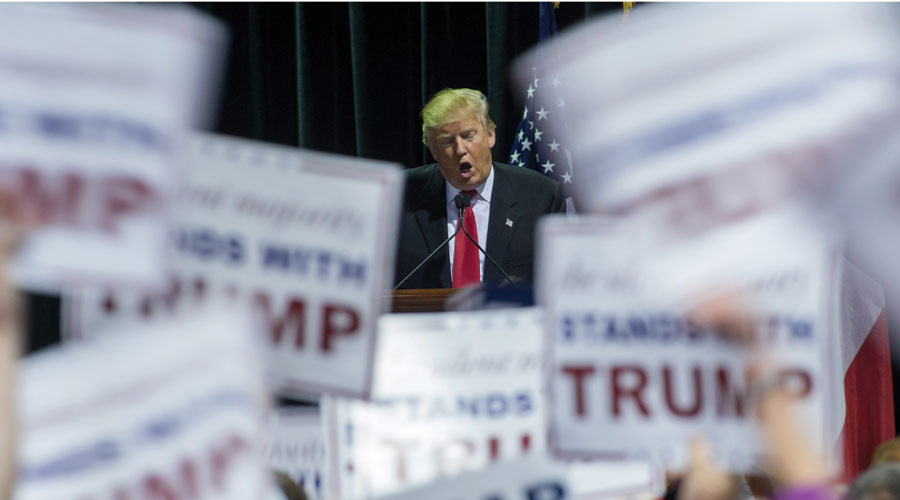 “The labour movement has been decimated – not for the first time in American history,” admits Chomsky. “It has recovered before, and might again. There are many leftist organisations, involving a very large number of people, but they are scattered and lack resources.”

For Chomsky, Sanders has little chance of winning in what is a primarily ‘bought’ election. So is Sanders right? Is a political revolution needed?

Surprisingly, Charles G. Koch, chairman and chief executive of Koch Industries and one of the richest men in America, agrees with him on at least one important issue. “The senator is upset with a political and economic system that is often rigged to help the privileged few at the expense of everyone else, particularly the least advantaged,” wrote Koch in the Washington Post in mid-February. “He believes that we have a two-tiered society that increasingly dooms millions of our fellow citizens to lives of poverty and hopelessness. He thinks many corporations seek and benefit from corporate welfare while ordinary citizens are denied opportunities and a level playing field. I agree with him.

“Democrats and Republicans have too often favoured policies and regulations that pick winners and losers. This helps perpetuate a cycle of control, dependency, cronyism and poverty in the United States. These are complicated issues, but it’s not enough to say that government alone is to blame. Large portions of the business community have actively pushed for these policies.”

As real as it gets

Bad To The Bone