Self-taught, self-funded, and isolated: the breakdancers of Gaza 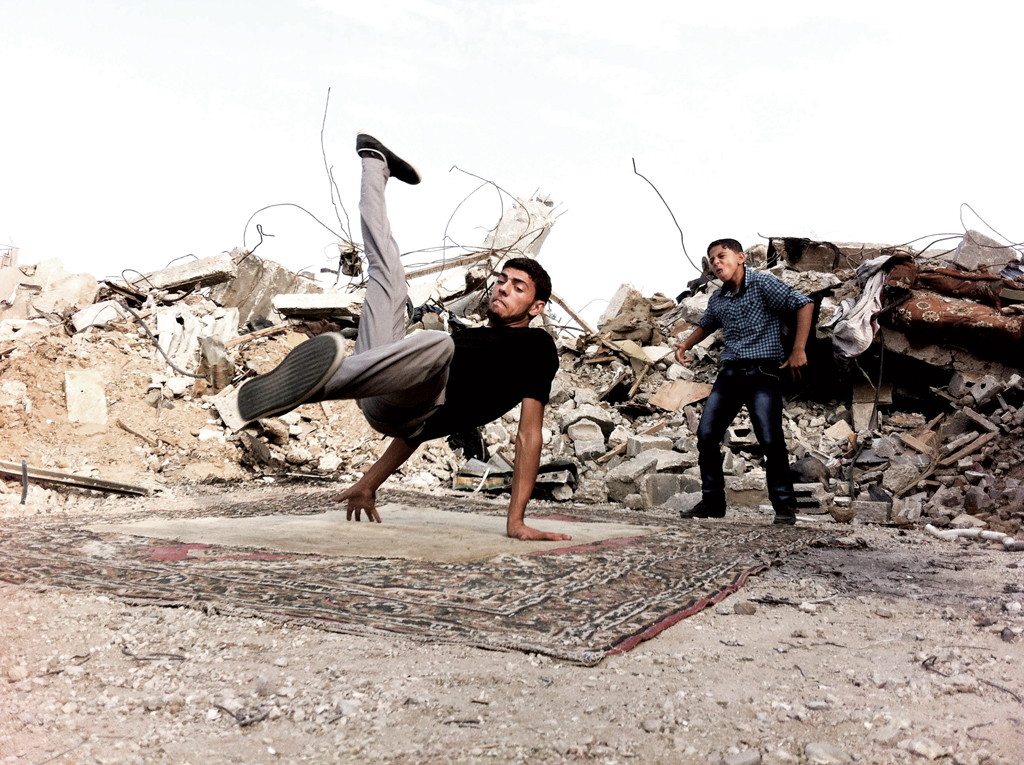 Ahmed Ghraiz is wrapped up warmly against the cold. It’s dark inside the dance centre in which he sits, the occasional teenage voice echoing loudly in the background. There is no electricity and little light, while a car battery has been wired up to his laptop in an attempt to generate power. The moment the internet router is turned on, the battery dies. “I tell you, I’m really suffering in this situation,” he says with exasperation.

“I finished college five years ago and trained as a nurse, but there is no work. There are no jobs in Gaza, just a lot of people waiting around for nothing. Should I just wait until I get a job? Should I do nothing with my time? No. So I decided to teach dance up and down Gaza. That’s how I’m living. This is how you find me now.”

Ahmed is sporting a trademark beanie hat when we talk and is doing his best to sound upbeat. Sometimes he succeeds, other times demoralisation creeps in. “You know, if I wasn’t a dancer I wouldn’t be alive,” he admits. “When I walk in the street I see people around me who are not alive. Their lives have the same routine, the same tedium. This is what the situation in Gaza has done to them. It has worn them down.

“Dancing is inside me, but every dancer will never be complete. Every person should learn new things every hour and every day and even if I think I’m complete as a dancer and I don’t need to learn, the opposite is true. I need to learn. I have to learn and this is what frustrates me about our situation in Gaza. We aren’t learning. We are on our own.”

At 25 Ahmed is older than many of the other members of the Camps Breakerz Crew, a group of breakdancers and body poppers who first came together in 2003. Formed primarily as a reaction to the harshness of life in Gaza, the group has attempted to forge a new lifestyle for itself and for the teenagers it teaches in the Nuseirat refugee camp, one that is based on peace and love rather than violence. Mixing breakdance moves with drama and elements of self-expression, Camps Breakerz is essentially resistance through hip hop.

“Dancing is inside me but every dancer will never be complete. I need to learn and this is what frustrates me about our situation in Gaza”

It is also the world’s most isolated B-boy crew. There are no teams for them to battle against, foreign crews are not allowed to enter the strip, and no international companies will sponsor them. Even the other three elements of hip hop culture – rap, graffiti and turntablism – are all but absent, with only a handful of practitioners scattered across the occupied territory.

n a similar fashion to other proponents across the Arab world, the crew upholds the original tenets of hip hop culture by promoting unity, peace, love, truth and respect, although as a western form of expression within a conservative Arab society, it hasn’t been easy. Community scepticism, isolation, despair and the destructive forces of war have all formed barriers, with the group’s original training space – a rented dance studio in the central Gaza Strip – bombed and demolished during the war of 2008-2009. Perseverance, however, led them to successfully crowdfund for a new dance centre in 2012, and it is within this centre that Ahmed now sits. 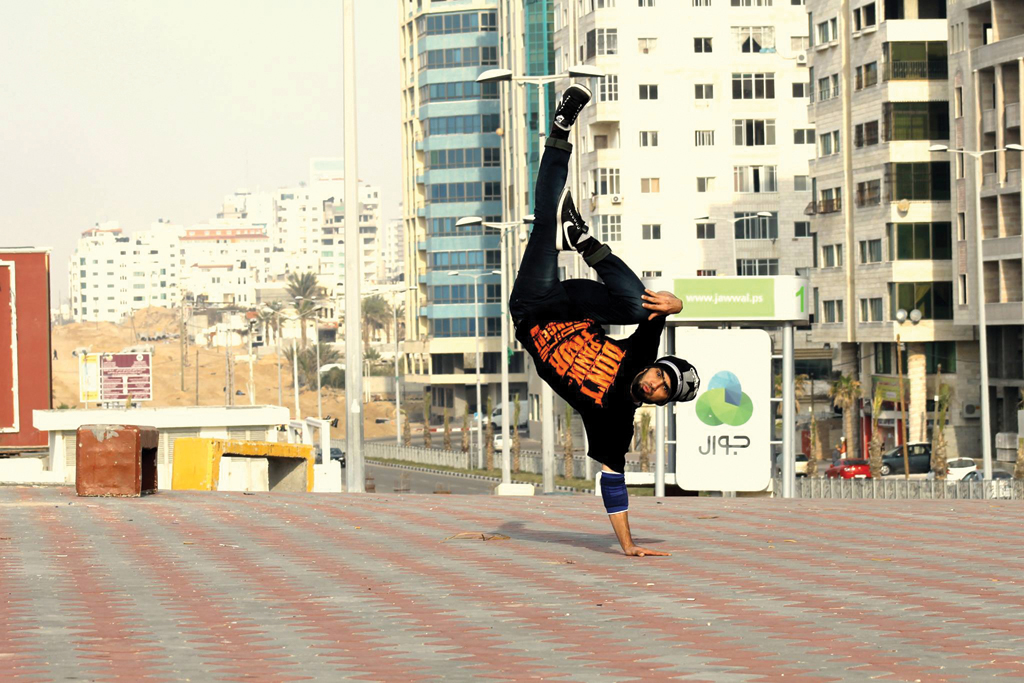 “It’s easy to get upset and for my crew members to get upset, because sometimes the community is not paying any attention to us and to our dancing. The world, too,” says Ahmed, who is also known as B-boy Shark. “We were in touch with companies like Red Bull – because they organise B-boy events around the world – but they ignored us. Do you know what they said? They wanted us to go to Israel. They wanted us to have a battle there and to join the international competition. I told them, ‘Do you know that I can’t even get out of the Gaza Strip and go to Jerusalem?’ They think we can just get into a car and drive to Tel Aviv or Jerusalem, like it’s no problem. It is not like this. We live in a giant prison.”

For Camps Breakerz, breakdancing is a form of release from much pressures that include more than 50 per cent youth unemployment. It is also a demonstration of capability and flair, which many of those living within Gaza City initially believed inhabitants of the camps did not have, according to Ahmed’s brother, Mohammed Ghraiz. It is one of the reasons why he established the crew 12 years ago.

“We wanted to show the people of Gaza City that the camps do have talent and skill, because some people in Gaza City believe we are uneducated and closed-minded,” says Mohammed. “In the beginning we used to dance in a small sports club where we hid ourselves, improving our levels and thinking how we should spread this new culture between the communities of Gaza. Our dancing became mixed with drama and art in order to explain ourselves better to the people. This way we became connected with the community.”

That connection goes deep. The crew, which numbers nine, teaches children dance and carries out workshops with NGOs, while it recently sought funds for another academy in northern Gaza, with its Indiegogo (a crowdfunding site) target of $7,500 reached a few days before the campaign closed on February 26. With the money it plans to open a dance centre in Shuja’iyya in the northwest of the Gaza Strip, one of the areas most devastated by last summer’s war and the scene of the Battle of Shuja’iyya, one of the bloodiest confrontations of the war between Israel and Hamas. 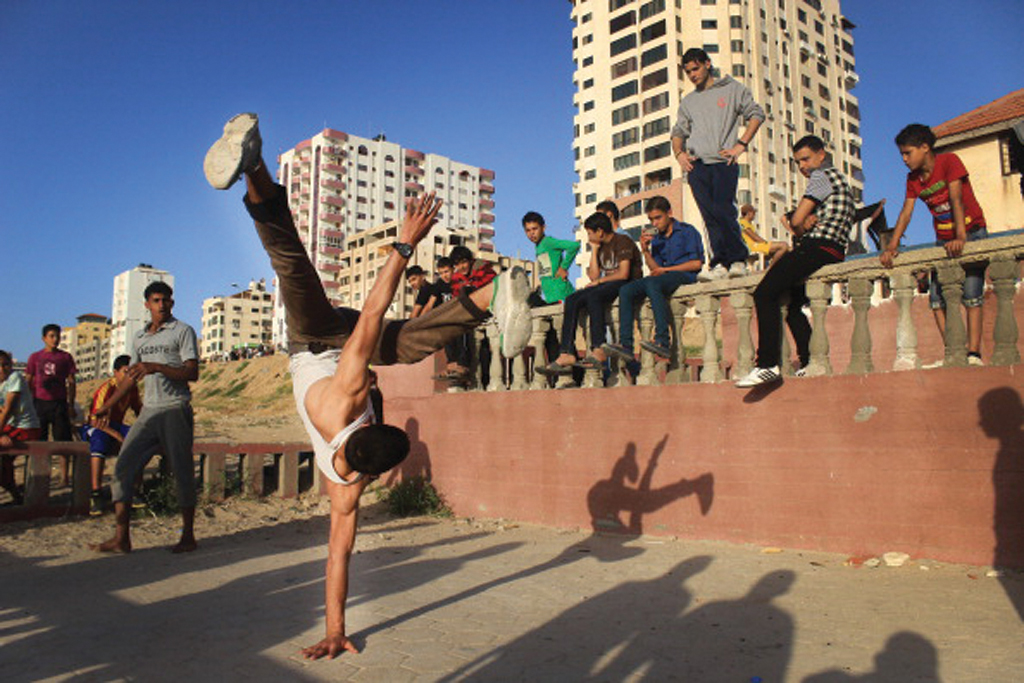 “We believe they [the children] need to dance and learn to focus on art, peace, and love so they forget the awful memory of war,” said the crew on its Indiegogo fundraising page. “We also believe that establishing a dance academy for children there is the best solution.”

The crew’s goals are to establish dance academies across Gaza and the wider Middle East; to create exchange programmes with breakdancers around the world; to spread equality and women’s rights in Gaza; and to build an international network called Dance Gaza.

For the B-boys, dance is a means of escape. Last year the group held two breakdancing competitions and they regularly tour Gaza spreading a message of peace. Energetic, fun-loving and doing the best they can in the situation in which they find themselves, their moves utilise momentum, speed, endurance, strength and control. Their individual stances and poses are frequently defiant, while their stage shows incorporate messages of resistance. Out in the camps, they freeze and power move in narrow alleyways, their skills emulated by young kids and teenagers.

“We do not put dancing first in Gaza because we need life to dance. We fight and struggle finding life to dance”

“Our situation forces people to fight back and resist the occupation,” says Mohammed. “Hip hop and breakdancing is the best way to express those feelings because it decreases the side-effects of occupation and siege.”

Isolation, however, comes with a price. The group is self-taught, with Mohammed first discovering breakdance through B-boy videos on MTV. Everything the crew performs has been learnt from the internet, with spins, stabs, flares and top-rocking performed well, but only interaction with the outside world will enable them to improve. Ahmed in particular is frustrated, with the ability to master more complex moves currently beyond their reach. 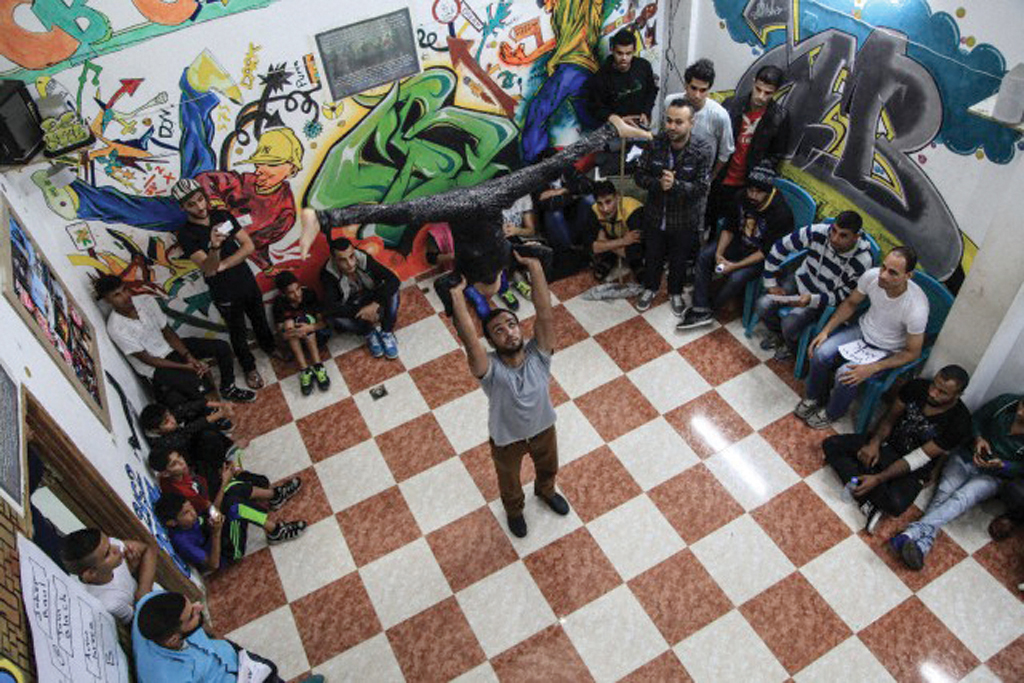 “We have been trying to bring over breakdancers from the US because we need something positive,” he says. “To jump to another level. Because when we practise it’s the same thing, the same guys, the same levels, the same moves. We need new people, we need new faces, we need psychological support from breakdancers who will come to visit us. We need that push up. That’s why we’re trying to organise a tour for our team in Europe this summer. If we do this it will be amazing. We will come back to Gaza and we’ll be fresh and have clean minds.”

“If there were no siege we would be travelling and learning a lot about dancing,” adds Mohammed, who is known as B-boy Funk. “We would be performing all year, around the world, but we can’t travel and get out of Gaza.”

Limited to local shows, without access to other crews, and with no meaningful interaction with the outside world, the crew is an island of hope. “Our minds think of life – surviving, money, then dancing,” says Mohammed. “We do not put dancing first in Gaza because we need life to dance. We fight and struggle finding life to dance.”

For some that has meant leaving Gaza, Mohammed amongst them. He is dancing, studying and teaching in the US, while another member – Belal Abu Shaweesh – has moved to Norway with his family to find a better life. Both still represent Camps Breakerz.

“There is not enough food in Gaza for dancers to eat well and gain enough energy,” says Mohammed. “There are no jobs, so we have to take care of our students by receiving donations every now and then so we can cover their needs as dancers. We believe people need peace and human rights in Gaza and that dancing is the way. We teach our students how to live in peace and to respect others’ rights and religions.”

Theirs is a basic existence. All the trappings usually associated with breakdance and hip hop culture simply do not exist. Sound systems, decent venues, DJs, beatboxers and the urban clothing worn by breakdancers worldwide are conspicuous by their absence. This is breakdancing stripped to its bare essentials. Videos of them online show the crew performing on pieces of cardboard stuck together with masking tape amidst the rubble of their former dance centre home. Others are minimalist and amateur in production but their skills as breakdancers are evident.

“Whoever you are and whatever you believe in, we are on the same line as you,” says Mohammed. “We are people who want to have options to live as equally as you do. We are just humans, but we love living in Gaza and fighting to make changes.”

The Queen of Arab HipHop

The Coast To Coast Challenge
Advertisement