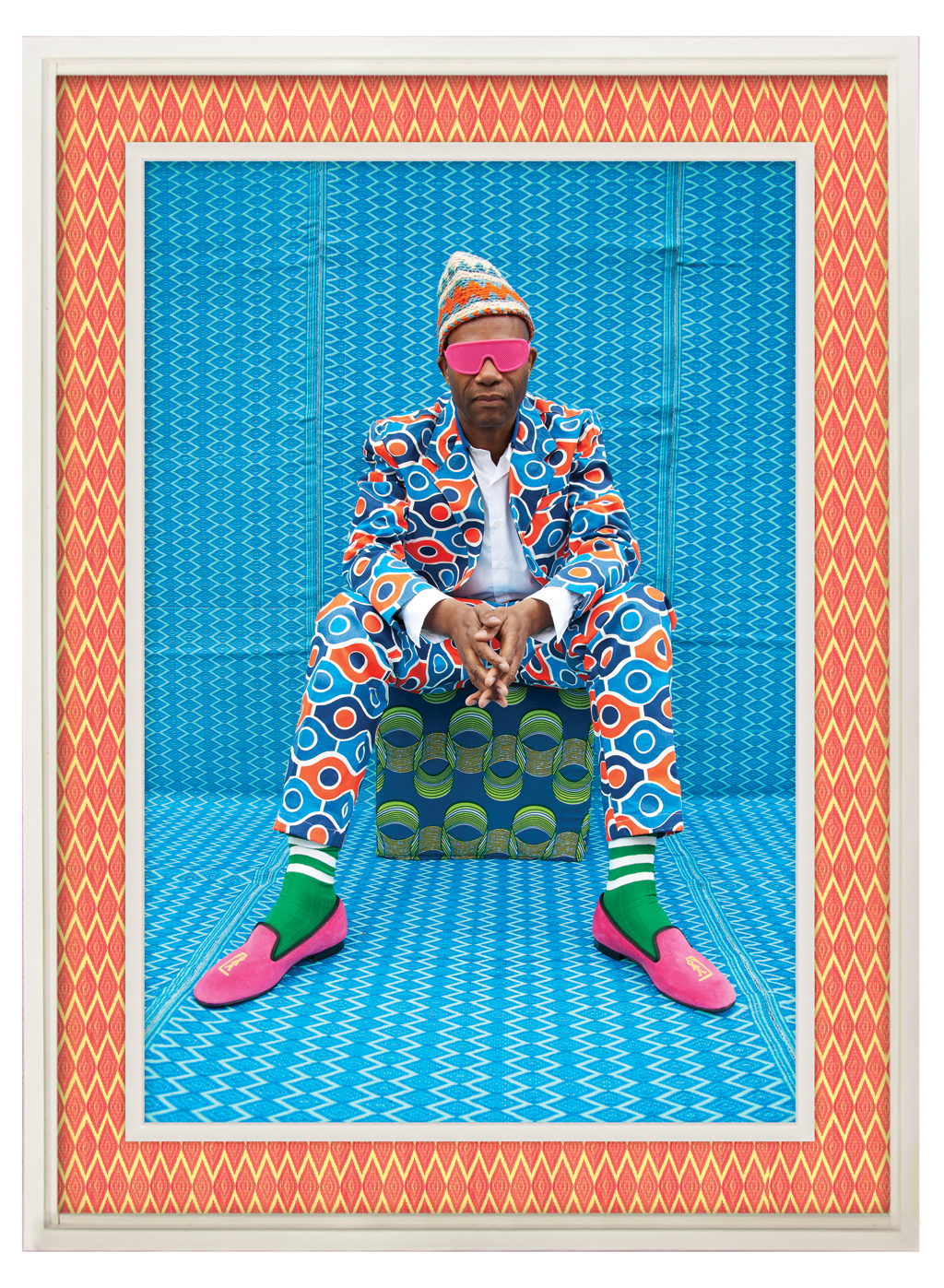 There’s a solitary table and chair outside Hassan Hajjaj’s studio in Shoreditch, London. The table – an upturned stop sign from Morocco – and the chair – a series of flattened Senegalese soda cans nailed to wood – are both Hajjaj to a tee.

The pop artist, photographer and designer has a habit of repurposing objects of utility. He’s turned discarded Coca-Cola crates with Arabic script and advertising signs into furniture, toyed with populist consumerist culture, and used counterfeit, knock-off goods as a critique of the society. No wonder the pavement outside his Calvert Avenue shop is home to such items. It’s just gone 6pm and Jenny Fremont – a friend and muse to Hajjaj and an artist in her own right – has been patiently talking to Emirates Man for the past hour. There’s a small cup of coffee and a half empty packet of Cutters Choice on the table, and the light is beginning to fade in this relatively quiet corner of London. Inside, Hajjaj is talking in a strong London accent, belying his Moroccan heritage but reinforcing his capital city pedigree. We’re about an hour behind schedule, but it’s Frieze Art Fair and the man’s in demand.

“In Africa and other parts of the so-called Third World, people use crates as seats and I wanted to give them more value,” Hajjaj says, when we eventually sit down. “Also, Coca-Cola is universal and you can communicate to anyone by playing with brand names. But I’ve been lucky that the West and Arab countries have accepted this work as art.” We’re inside now, surrounded by a kaleidoscope of colour and North African exuberance. Fabrics, textiles and brands fill every inch of space, while Hajjaj himself is enveloped by the paraphernalia of the brand obsessed contemporary culture that permeates his work. Various forms of everyday packaged consumer goods, their names sometimes written in both Arabic and English, fill an intricate wall unit, while movie posters, photographs, SuperLux tables, carpets and assorted handicrafts create the kind of chaotic curated space that it’s easy to become captivated by.

At the far end of one room, a photograph of a veiled ‘Kesh Angel’ dominates your field of vision, an old mobile phone raised to her right ear, while two Les Africains posters hung side-by-side command another. There are amusingly decked out mannequins spread around too, with the influencers of Hajjaj’s work there for all to see. 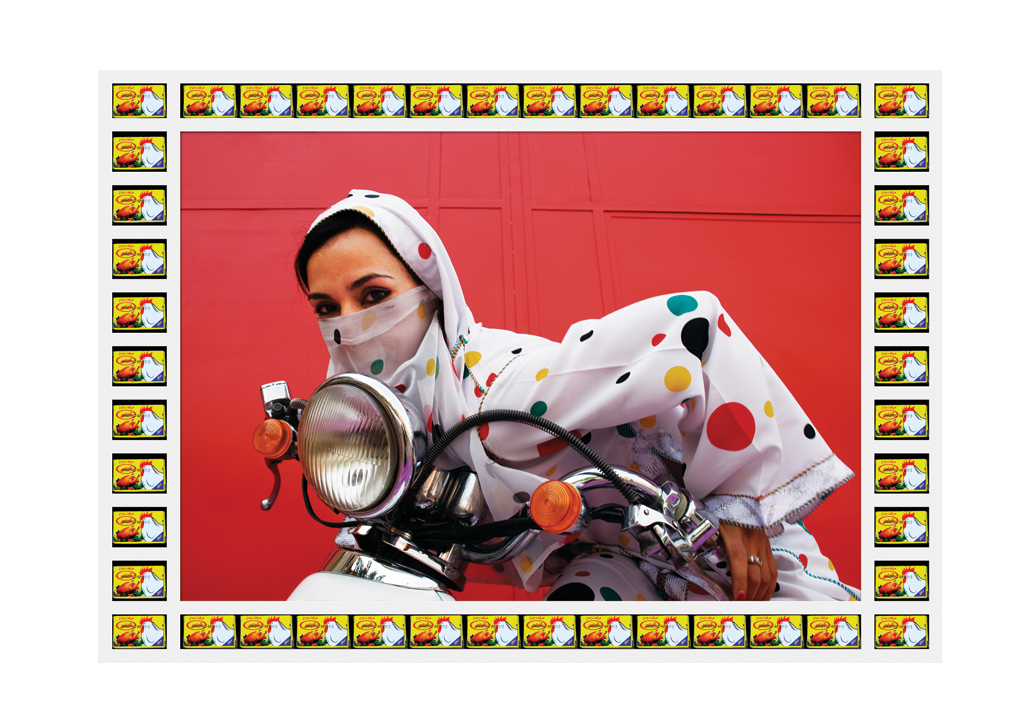 “The more you don’t want it, the more it happens. That’s what I’ve learnt. Even when I started showing my work it took three years I think before I had the confidence to use the word artist,” says Hajjaj, who was born in Morocco in 1961 and moved to London at an early age. “Because I didn’t go to art college, because I didn’t train, and I came from a background of unemployment and the London club scene, I found the title of artist a little bit uncomfortable. There was also the feeling that maybe it’s just a moment, maybe it’s not going to be long term. I’d shot for maybe six or seven years and never showed any work, so I had a big body of work, but I never thought it would be a long-term thing.”

Hajjaj’s star, however, has been on the rise for years, as his talk on the relationship between tradition and consumerism at Abu Dhabi Art Fair last month testifies. He has been regularly exhibiting across the US, Europe, Africa and the Middle East and one of his most successful bodies of work – a series of studio portraits called My Rock Stars: Volume 1 – had its premiere at The Third Line gallery in Dubai in 2012. What’s more, he was shortlisted for the Victoria & Albert Museum’s Jameel Prize For Islamic Art in 2009 and his work is in the collections of venues such as the Brooklyn Museum in New York and the Institut des Cultures d’Islam in Paris. Not bad for a kid afraid to call himself an artist.

“The more you don’t want it, the more it happens. That’s what I’ve learnt. Even when I started showing my work it took three years I think before I had the confidence to use the word artist”

“You know, I was unemployed for a few years and I started getting involved in the London scene in the 1980s,” he says, discussing the roots of his art. “We started running clubs, for example. It was about creating a space, DJs, putting bands on, promoting, so I was learning how to talk to people about production. Then I bought a camera in 1989 and it was just a hobby. Every now and then I would go and shoot and, without realising, I would use all those elements that I had used before when running clubs and growing up in London. I’d say ‘OK, I’m going to shoot with people’, I’d find people; ‘I want to shoot in this kind of location’, I’d find the right spot; ‘the women are going to wear camouflage’, I’d buy the fabric, take it to the guy making the outfit, dress them up. It became natural. All the stuff I’ve done in the past, like running clubs, running the shop and buying stuff for the shop; you have to put collections together to try and sell, and I didn’t have much money so you found a way of doing it. You always found a way.”

Much of his work features the fake logos of global brands such as Louis Vuitton and Nike, with individual pieces framed by consumer goods and adorned with the trappings of popular culture. It is a way, he says, to make people feel at ease, to tell stories, and challenge stereotypes. He also “plays with and upends stereotypes, the power of branding, and the familiarity of everyday objects”, as a blurb for his Kesh Angels solo exhibition at the Taymour Grahne Gallery in New York stated earlier this year. In that body of work he sought to toy with perceptions of Arabic culture and the relationship between East and West by photographing traditionally clad but defiantly modern young women on motorbikes. The idea was to subvert preconceived notions of Arab women. In one image, the Nike logo adorns the veils of three women. 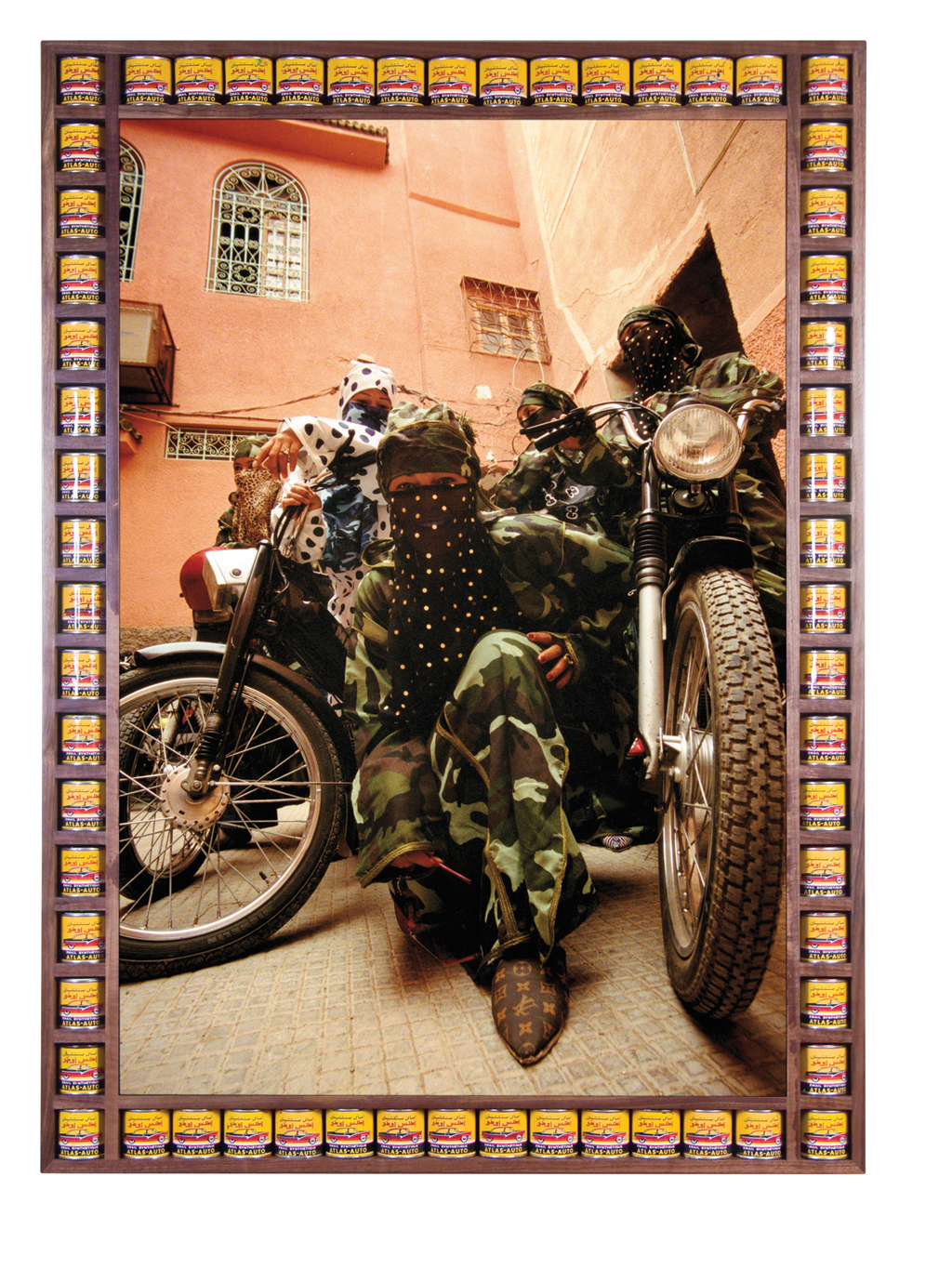 “People seem to see it as the power of the brand and I’ve had loads of people introduce me as the guy with Coca-Cola in his work,” he laughs. “But I’m like a magpie. That’s what’s around me, that’s what happened, that’s what came out of me. I’m coming from that lineage in the ’80s where all these big brands were never really designed for people like ourselves, so we’d go and buy the fabric and sew it into our jean jacket – Gucci or anything like that. We were aspiring to be part of that world. And also by using counterfeit products I’m also presenting a layer of people like myself, because, if I was still wearing all these labels, I would probably be wearing counterfeit. There’s more meaning in using counterfeit products.” 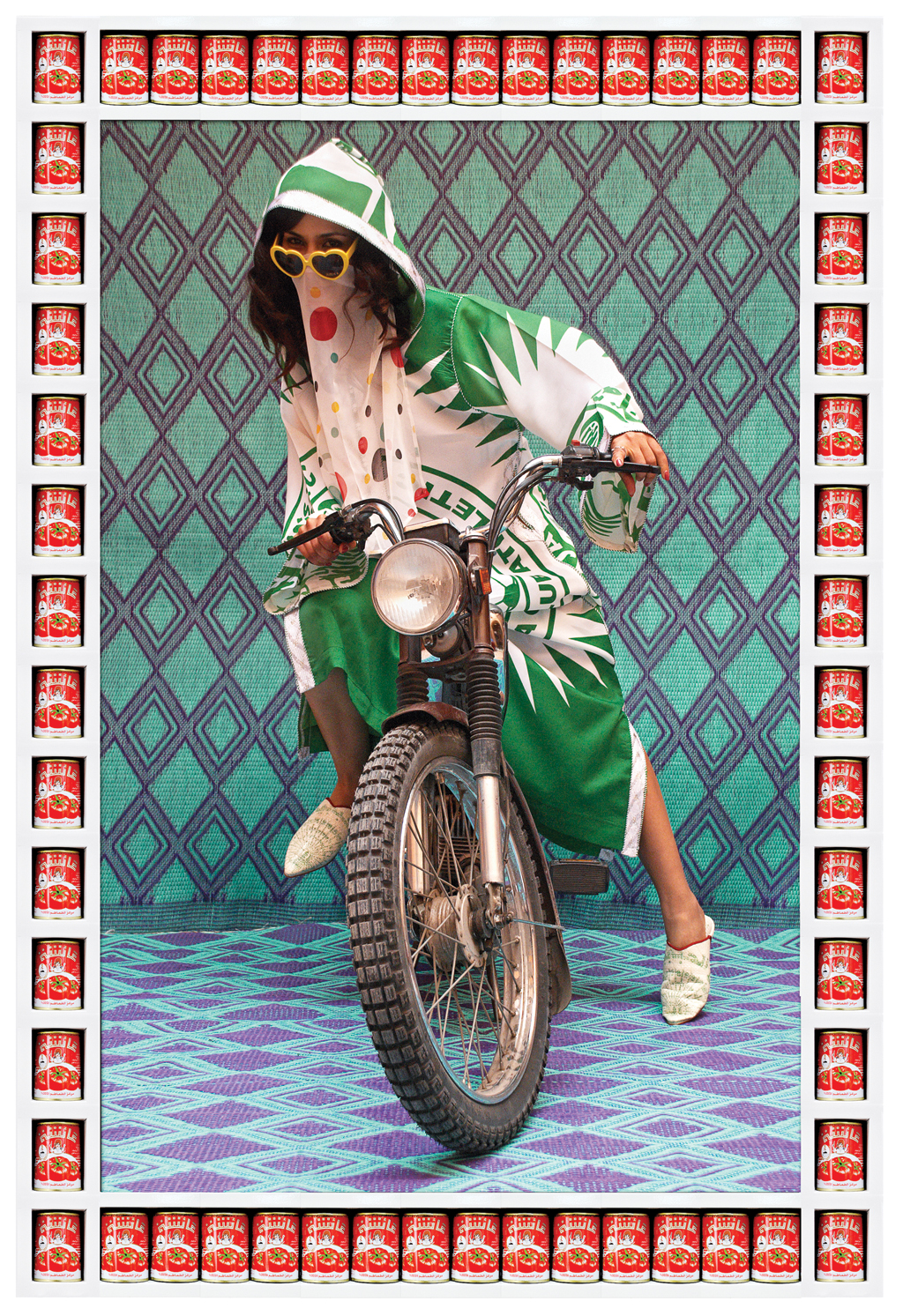 Sometimes playing with contrasts, celebrating colour, and fusing design with photography, Hajjaj admits he is constantly trying to find his space in the art world and to find out who he is. Attracted to markets and cheap stuff – he had a store in Camden Market for seven years – his portraits also borrow from the tradition of African studio photography and the work of photographers such as Malik Sidibe and Seydou Keita, while his artistic versatility has led him into installation, performance, fashion, interior design and now film. “I can afford to make mistakes and maybe I’m a little bit freer because I didn’t know what direction I was going in,” he says. “My only downfall was that, technically, I’m not the best. When you go and study you learn technique, which is something I didn’t really have. But I’ve found that by having recognisable products on the textile or around the frame, it’s easier to bring people in and to engage with them. If I had a picture of somebody wearing a black dress, or black leather with a black band, with a black frame, that would probably produce negative reactions. They’d think Isis and Iraq and their mind would go off in a certain direction. But if the person in the photograph has some bright colours – with Louis Vuitton and maybe Coca-Cola – the viewer says ‘oh look, Louis Vuitton and Coca-Cola’ and you immediately bring them in. It’s still traditional, but you’ve got to bring them in a little bit. This happened kind of accidentally, but I’ve learnt this is a good way – sadly enough it’s through brands – to communicate and to bring people into your work for a minute and to try and take them on a journey. You can then play with perceptions and stereotypes and say something.”