Amirah Tajdin is slowly making a name for herself within the realm of indie filmmaking. With a Sole DXB documentary to be released in April and a feature film project finally ready to seek funding, she is opening up a path for young female directors in the UAE 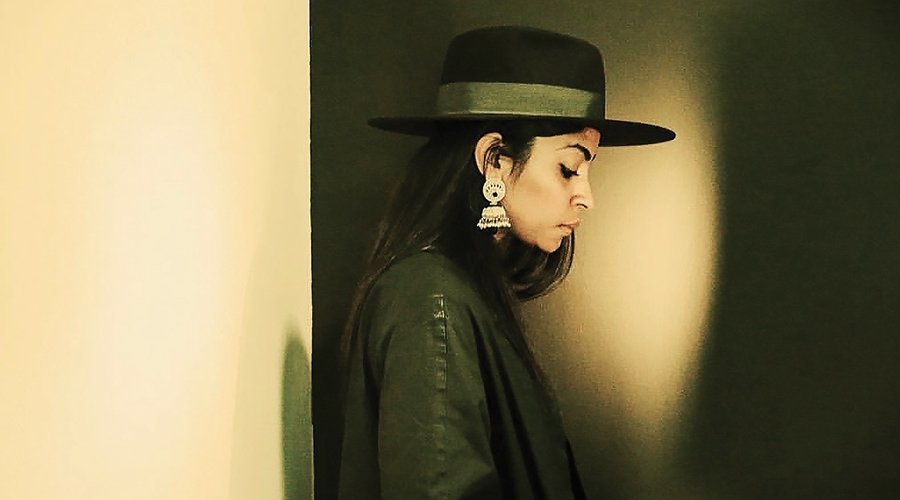 Amirah Tajdin is describing her feature film. Set in Kenya, it is the story of a Muslim wedding singer in Mombasa. She smiles. It is not what I had been expecting.

“He heads home to seek validation from the one person who never gave it to him – his dying mother – and finds that she’s still pretty much the same woman she’s always been,” Tajdin explains. “So he decides the only way he’s going to break through to her is through the language he knows best, which is love songs. So throughout the film he communicates with her through Swahili love songs, which is in itself a dying art form.

“I just wrapped my fifth draft. Fingers crossed we get some financing soon. We’ve been developing it for almost three years now and I’ve been writing the script for two, but only now do I feel like it’s finished.”

The two of us are sitting in a café on the ground floor of Burj Al Salam ordering green tea and coffee. Tajdin – petite and quiet – appears shy and unsure of the wisdom of talking openly to a stranger, but is as busy as she’s ever been since returning to Dubai just over two years ago. A Sole DXB documentary, which focuses on the lifestyle platform’s fifth-year anniversary event last November. is to be released in April, while she is currently in post-production for a documentary about Syrian refugees. She describes the latter, which was commissioned by an independent philanthropist, as a poetic ode to the plight of refugees, narrated first-hand by those living in camps in Lebanon and Jordan. 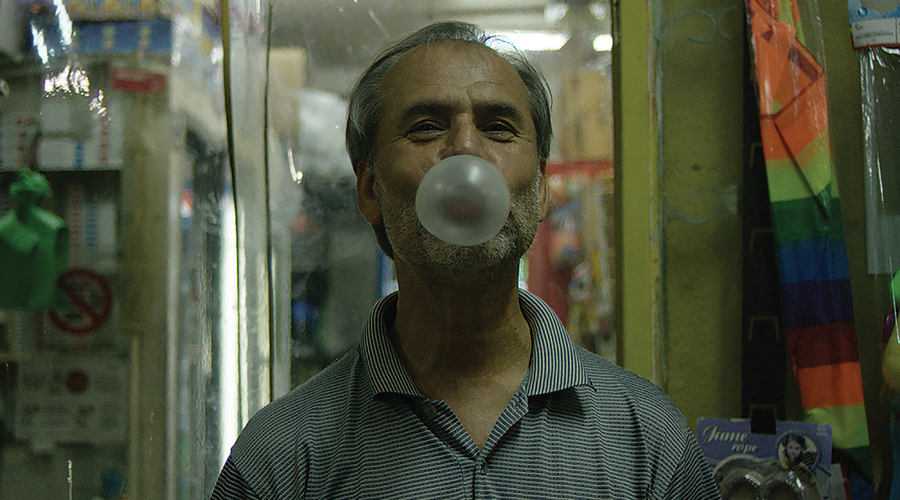 Tajdin is one of only a handful of young, female indie directors choosing to do things on their own terms, side-stepping traditional filmmaking paths and embracing a more makeshift attitude towards making movies. In that sense, she is a pioneer in Dubai, where the number of female directors is minimal, although there are others across the region, including Zahi Farah and Mounia Akl in Lebanon.

And although they have all so far only made short films – Tajdin’s Marea de Tierra, made with the Chilean director and actress Manuela Martelli, was shortlisted for the short film grand jury prize at the Sundance Film Festival last year, while Akl’s Submarine won the special jury prize at the Dubai International Film Festival last December – they have their eyes set on feature film success.

“I’ve realised our generation is probably the most petrifying generation because we don’t give a damn about money or doing things by the book,” she says. “Maybe somebody’s going to be saying the same things about me in ten years, but I’m constantly doing stuff on the side that’s with small to non-existent budgets – sometimes Dhs4,000, which is not even a budget – and I’ve been lucky enough to find directors of photography who want to work with me, and I want to work with them.”

Tajdin was born into the Swahili/Omani community in Kenya and has spent much of her life between Nairobi, South Africa and Dubai, where she spent her teen years and now lives. Although her time appears primarily focused on personal work, such as short films and prospective features, it is commercials that are her bread and butter.

“I’ll always give mega kudos to Dubai… as a female director of colour who was 28 when I got here two years ago, I got access to stuff that I would never get anywhere else. That’s a huge part of being able to find this balance between commercial work and developing our feature film.”

Much of that work is created with producer sister Wafa Tajdin, who she spent four years with in Kenya before moving back to Dubai. It was in Kenya that they forged their working relationship, producing their first long-form documentary together, and shot a short film that did well on the festival circuit.

“I’ll always give mega kudos to Dubai,” admits Tajdin, who graduated from Rhodes University in South Africa and Goucher College in Maryland with a degree in fine art photography. “Because as a female director of colour who was 28 when I got here two years ago, I got access to stuff that I would never get anywhere else. That’s a huge part of being able to find this balance between commercial work and developing our feature film.

“And then there’s the lovely part of being a female director in this part of the world, where there’s an underlying respect for women, which is also one of the reasons why I moved back here. Living in Cape Town or Nairobi as a woman, you’re vulnerable to some things that don’t happen here.”

Much of her work since returning to Dubai has been with the team behind Sole DXB, despite the struggle of being a woman in a male-dominated commercial world. Baqala, a nocturnal sojourn through Dubai celebrating the city’s corner store culture, was co-written with Hussain Moloobhoy, one of the co-founders of Sole DXB, while Grit Grace Gold shined a light on the city’s breakdancers.

It is within Marea de Tierra, however, that you see the importance of visual imagery, music and movement with Tajdin’s work.

“I was actually thinking about this just two days ago. The idea of a certain style within my work,” she says. “I met a film critic once and he told me that if you ever want to describe a director, look at their films and their personality will seep through. I like movement. I like moody. And that kind of sums up who I am. Not moody in a bad way, but moody in terms of visual mood.

“There’s always a flow in my work. Music also is huge, and that’s mainly because my visual language was developed through punk rock, which was a very important part of my life. I went through a time where I rejected my gender entirely and was like, ‘I’m a boy,’ which is why this film is also happening. I wanted to be a boy for about five years of my life. I was like, ‘Mum, I need you to cut all my hair off, this is the hairstyle I want.’ She was like, ‘OK. I threw out all my dresses, wore pants for years, changed my name – I was like ‘Amirah is so girly’ [it means ‘princess’] – and I told my friends that no one was allowed to call me Amirah.

“I think for me, what I was struggling with – and now I can look back on it and understand what I was going through – was not a sexuality thing, it was purely a gender thing. I wanted to be a tough girl. Both my mother and my grandmother were strong women, but women are victims of a lot of societal things and you notice that men have certain powers and women don’t. Women suffer a different existence to men. And for me, I was like, ‘I don’t want to be a girl.’

“And then I discovered punk. And I discovered riot grrrl. And I was like, ‘OK, cool, I can be a tough girl and I can still embrace my gender and my sexuality and my femininity. I can still define it.’ That took a while but really if it wasn’t for punk rock I would’ve been a boy. And that all tumbled into art. We were all teenagers in Dubai at this point and we found a little community, a little tribe. There was me, and a bunch of my girlfriends, and we were all these hardcore punk girls and we were women of colour. This was us, on our own terms. It forms you in a way that you don’t even realise… I know, I know. I’ve digressed. We’re talking about the film, right.” 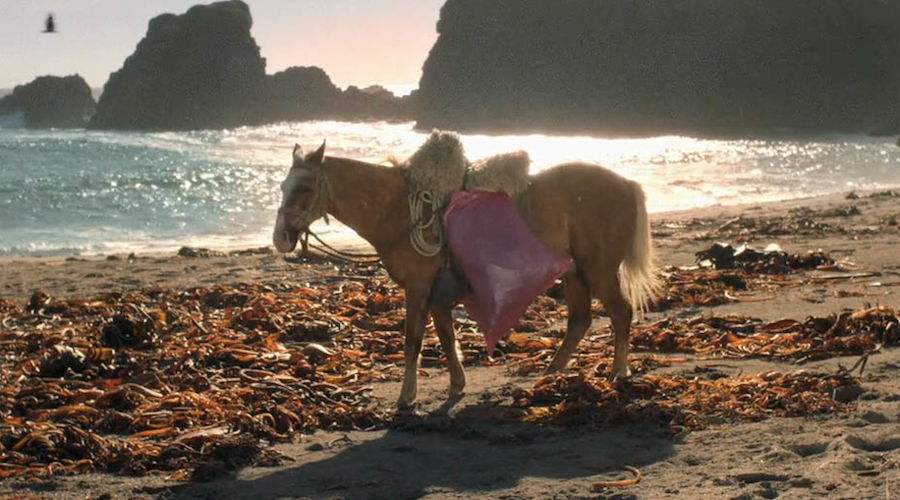 Do you class yourself as a filmmaker?

“I never call myself a filmmaker, I call myself an artist,” she replies. “But as an artist you’re always seeing, taking in and questioning, having experiences. Sometimes it’s hard, sometimes it’s easy, most of the time it’s hard,” she says with a laugh. “But you have a duty. And as filmmakers we have an even bigger duty. We narrate and shape and share. It depends on what’s going on with my life personally, it depends on what I’m experiencing, what I’m listening to at the time, because a lot of my work has started from me just hearing songs, feeling visuals, and from those visuals come a story. It’s always this kind of roundabout, always moving circle that I’m experiencing, and music is so, so key to my person.”

Why make this film?

“One of the reasons is because of the radicalisation that’s happening in the Islamic world,” she says. “We grew up at a time when there was so much more tolerance. I mean, this character is based on an uncle. He wasn’t a wedding singer, but he was a very fabulous man and the community accepted him, just like they accepted others like him. Music was always a big thing, so for me this is a love letter to my people. And not just the Swahili people, because we are dying out as well. Our colour is disappearing.

“I call myself an artist, but as an artist you’re always seeing, taking in and questioning, having experiences”

“I’m also doing it for my younger self. Because if my younger self had someone to look up to it would’ve been so much easier. In fact, the only woman I looked up to was Shirin Neshat, who I eventually got to meet and fan-girled. 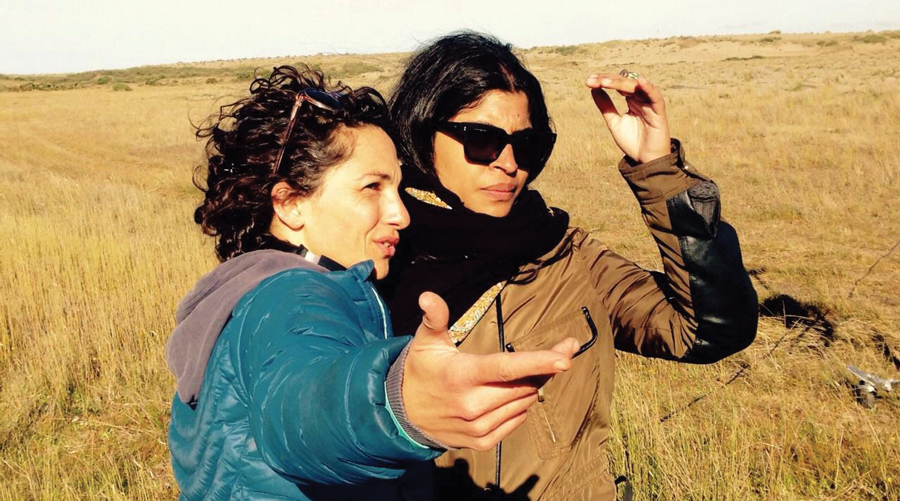 “She was down for the Dubai International Film Festival and premiering her film, Women Without Men, and I just wrote a little note, passed it to her, said ‘hi’ and left. In the note I told her, ‘Thank you for being such an inspiration in my life, for allowing me to know that I can tell stories’. Or something along those lines. The screening finished, we walked out, and she asked who gave her the note. And my friend was like, ‘Shirin wants to say hi,’ and I was like. ‘Oh my God, no I can’t say hi to her.’ But she said: ‘Thank you. Thank you so much for that note. I was extremely nervous, I was shaking during my Q&A, and I held on to your note because it gave me strength.’

“That’s what being a maker is. You make stuff for people to feel. I don’t want to say I want to be the best director or have a legacy, but I want to know my art touched someone. Even if it’s just one person.”