Singer and songwriter Hamdan Al Abri has teamed up with the Dubai-based DJs and record producers Adriano K and Megadon Betamax to produce an album of chilled out soul, house and reggae 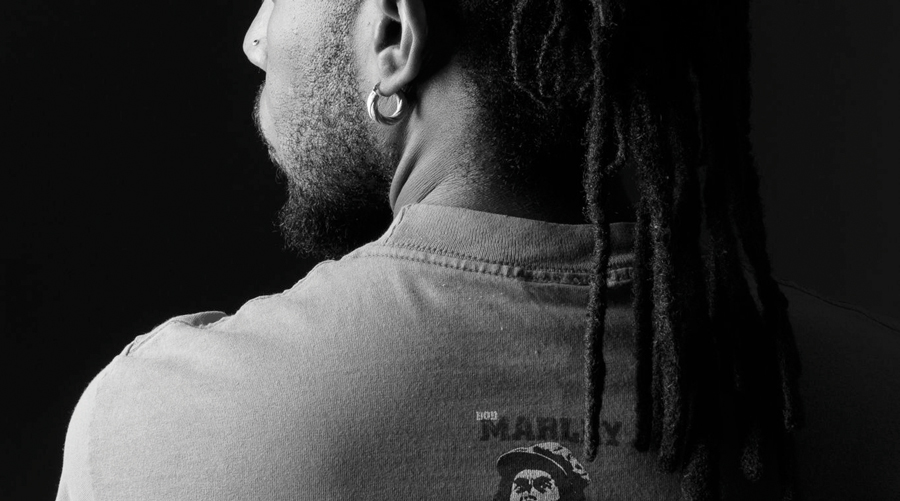 The singer Hamdan Al Abri is sitting on a couch in the recording studio of Adriano Konialidis drinking tea with Mostyn Rischmueller.

“You know, before I started working with these guys I was going through a creative block,” he says, gently stirring his tea and adding honey. “I wasn’t really coming up with any music. I didn’t feel like I had anything to talk about or sing about. After Bull Funk Zoo [a previous band he sang with] I didn’t know what to do with music and I stalled. I didn’t know what direction I wanted to go in musically and what I wanted to do as an artist in general. It just felt like I was in no man’s land for a bit.

“Then I started working with these guys and the creative juices started flowing again, you know. I felt inspired. I just started writing whatever I felt or whatever the track kind of made me feel.” 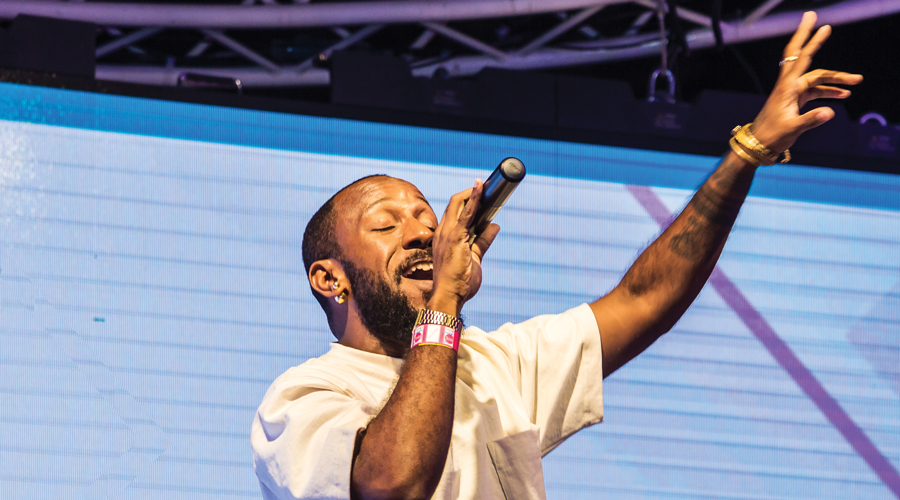 Abri, of course, needs little introduction. Arguably the UAE’s most accomplished male vocalist and lyricist, he has sung solo for years and with bands such as Abri & Funk Radius, with the latter releasing its first original song, Sunny Daze, just last month.

It is the first time, however, that he has collaborated with DJ and record producer Konialidis, known professionally as Adriano K, and Rischmueller, better known as Megadon Betamax, the Australian-born DJ and producer famed for his bass-heavy, boogie and disco-flavoured cuts and the label Voyeurhythm Records.

Together the three have formed Abri & The Dreamfleet, with their first album, We Fly, to be released on Konialidis’ Desmo Records in May. Co-produced by Konialidis and Rischmueller, with all lyrics written by Abri, it is a soulful and mid-tempo gem and the first full and original album from the label’s founder.

“The subject matter’s kind of dark, in terms of the lyrics and some of the music as well, but there’s a poolside, cinematic vibe to the album,” says Rischmueller. “An afternoon-on-a-boat sort of thing.”

“This album has been a great ignition for me to do stuff with my own band and also my solo stuff. It was a blessing in disguise working with these guys to be honest”

It will be the third release for Desmo Records this year, following the download-only launch of digital cumbia specialist Federico Sanchez’s first solo album and Matthew Conley’s Downbeat Winston. We Fly, however, is special, featuring a limited edition vinyl pressing and cover art by Slovakian creative director Jaro Moravek. It also includes collaborations with Madagascan musician Kilema on the songs Not Young, Only Love and Unborn, and Lebanese bassist Elie Afif on Want You Back and the title song We Fly.

“Adriano and I had previously worked on one remix together, as far as in the studio is concerned, and that came out really well,” says Rischmueller. “But we’d both been saying how it would be awesome to work with Hamdan, so we started producing and writing some tracks and when we had about three rough drafts – some guide melodies and some guide hooks – Hamdan came over, listened to what was the beginnings of some songs, and we took it from there.”

“That was the objective of this project basically – to hand over something to Hamdan, after all he is a mega, mega talent,” says Konialidis. “The minute he came to the studio and heard the music he loved it and laid something down and we were both, like, ‘perfect’.”

Rischmueller and Konialidis both previously worked together on Cerca Del Mar, a remix project featuring Trio de Cajun, Argenis Brito and Xavi Zeta. It was only the second release on Desmo Records following the double album A L.A.S, which had featured traditional Argentinean and Uruguayan folk music performed by Trio de Cajun and remixes by the likes of Mark Farina, Mo’Horizons and Jon Kennedy. We Fly is different in that it only features original work, meaning the creative process was different.

“This project is the result of the two of us meeting in the middle,” explains Rischmueller. “But also we were working more the way Adriano works in his studio, which is pick-up-an-instrument-and-record-it, rather than sequence it like I might do. We were recording everything in audio and jamming – on different synths and different guitars and on all sorts of instruments.”

“We really wanted to keep the live element going,” adds Konialidis. “Hamdan is used to having a band backing him and we didn’t want to move too far away from that, but at the same time we wanted to produce something that was solid enough as an album.” 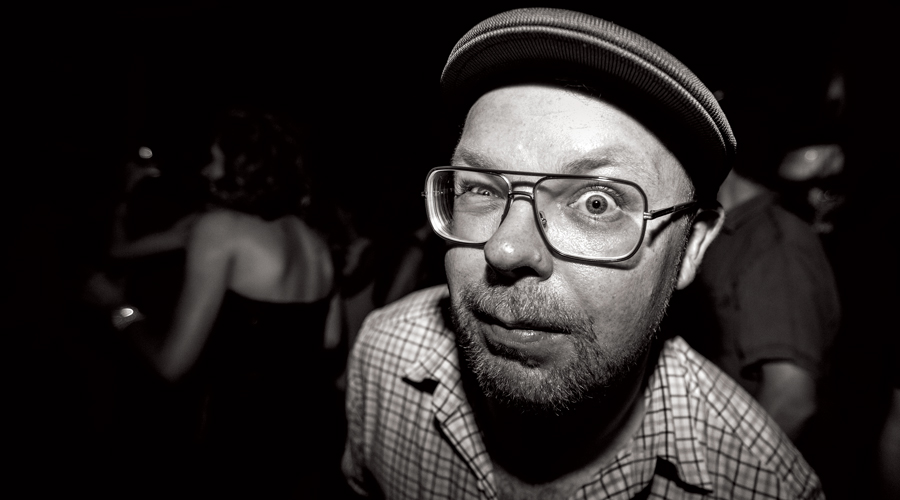 Rischmueller, who studied jazz, violin and guitar when growing up in Australia, agrees. “Adriano and I have similar backgrounds because we’ve both played instruments for a long time,” he says. “I don’t play any of them very well anymore, but that doesn’t really matter. It hasn’t stopped me making music for a long time. But it was good to pick up the bass or the guitar and Adriano and I work well together, spurring each other on to make things sound better or to find new sounds. That’s the good thing about it. We’ve managed to not just stick to the same palette for each song.”

The end result is musical honey, merging funk, soul, chilled out groove and reggae. It represents a departure of sorts for Desmo Records, with the label’s first two releases having had an unmistakably Latin flavour, which is understandable given Konialidis’ Uruguayan upbringing, Greek parentage and Swiss schooling.

“There are elements of reggae, a bit of soulful stuff, a bit of house, chill out lounge, but we didn’t really put ourselves in any genre. We just wanted to kinda do music for the sake of it,” says Abri, who is running late for a gig at Iris Dubai when we talk. “The thing about Adriano is he just lets you do your thing. There’s no pressure. ‘Take your time writing the lyrics, take your time coming up with the melody, you do your thing’, which is great when you’re doing these kind of collaborations.

“For me personally this album has also been a great ignition for me to do stuff with my own band –, Abri & Funk Radius – and also my solo stuff. It was a blessing in disguise working with these guys to be honest.”

It is not the first time Abri and Rischmueller have collaborated. A few years back they worked together on a track for Puma’s Fishtail Rides called Chase The Sun, while Rischmueller is probably best known internationally for his synthed-up, robo-boogie take on Chemise’s 80s dance-floor killer She Can’t Love You, released as He Can’t Love You in 2015 by Tugboat Editions.

“I’ve just set up my own studio and I’ve duplicated Adriano’s Cubase computer set-up, so we can work on sessions – same plug-ins, same software,” says Rischmueller. “I can take a session and work on it outside of his studio, which is the way it should be.” 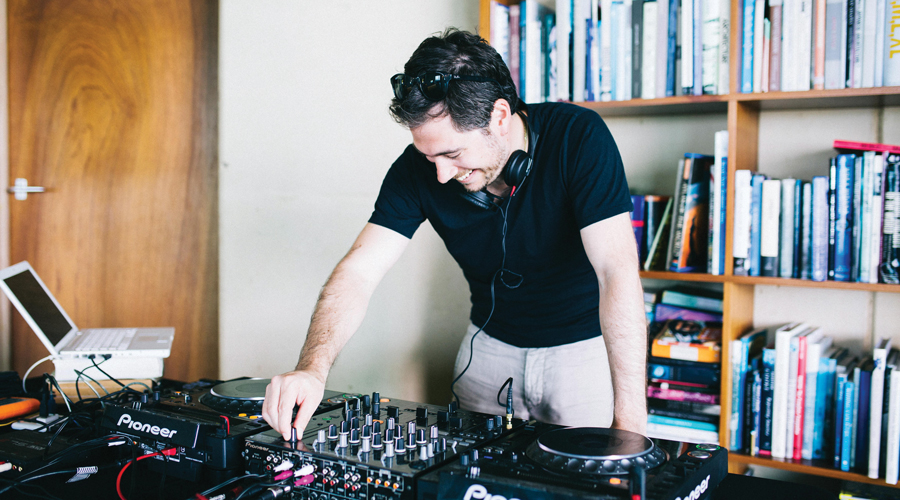 Konialidis’ studio is compact but impressive. An array of synthesisers line one side of the room, including an archaic Yamaha CP-25, while the studio’s focal point is a 16-channel mixing desk. Here and there are instruments from all corners of the world. There’s a custom-built cigar-box guitar (by Levo Guitars in Greece), a custom-built ronroco (a folk guitar from Argentina), a drum kit (including a custom-built Gabriel kick drum), a bass guitar, a telecaster, a couple of accordions, and a handful of other toys and percussions from Africa and South America.

Although classically trained, Rischmueller dropped out of music school, choosing instead to work in a music store, buy some turntables and a drum machine, and embrace DJing and music production. “I’ve always had those opposing worlds,” he says. “Where I’m into electronic or synth and drum breaks and records, but then I do have that classical background, which is similar to Adriano.”

“That’s what makes it so easy to work together,” continues Konialidis. “It’s hard to find harmony in a studio when you’re working with someone else. Mostyn will think of something, or I’ll think of something, or we’ll think of the same thing, and it makes us move much quicker on tracks. I’ve worked in studios with other people and so has he and I know how challenging it can be, so similarity in our background makes the work easier.”

“I’ve never really had an opportunity to make a record with someone so accomplished. And I think that’s what’s been good about this”

“The result is better ultimately,” adds Rischmueller. “Usually when you’re collaborating with someone it’s quite a push. You have to compromise or try and explain things. I was in Aussie hip hop groups, I was a rapper for a while, I’ve done all sorts of things, but it’s just that thing where you want to create and get better at what you’re doing. And to work with Hamdan as well is special. I’ve never really had an opportunity to make a record with someone so accomplished. And I think what’s been good about this is that, throughout it, his writing has been getting better and better.”

Changing the Face of TV satire