Laila Ajjawi, a Palestinian refugee living in northern Jordan, is using graffiti to tackle social issues and the struggle of women for equal rights 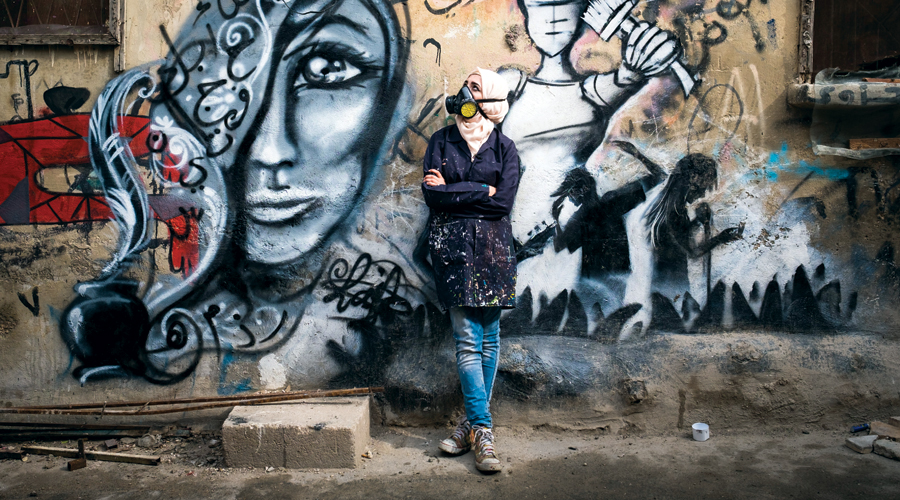 The lower half of Laila Ajjawi’s face is covered by a paint-splattered black respirator. “I always wear the gas mask,” she says with the suggestion of a smile. “It has somehow become part of my graffiti identity.”

Laila wears a dark blue robe, itself flecked with paint, and a hijab. She is, without doubt, an impressive figure.

“I created a piece of work in Egypt called ‘Be Yourself,’” she says. “It’s a tag that motivates girls to search within themselves and to discover their own identity and what defines them. It encourages them to step outside a world that is controlled by the media, which inserts a standard of beauty and creates empty copies [of people] who follow the media and what people say.”

It has not been long since Laila, who will be 26 this year and lives in a Palestinian refugee camp in Irbid, northern Jordan, first picked up an aerosol can and took to the life of a graffiti artist, but you’d never guess. Confident and determined, she has already made a name for herself, primarily because of the scarcity of female Palestinian street artists, but also because of the fact that she challenges the status quo in Jordan’s male-dominated society.

Many of the issues that the artist, blogger and trainer is attempting to tackle are, of course, well documented – namely the struggle of women in Jordan for equal rights in a highly patriarchal society and the plight of Palestinian refugees. Yet both remain sensitive topics. Jordan, for one, has the largest population of Palestinian refugees in the Middle East, with discrimination frequent and persistent.

“Through my art I’m challenging stereotypes, but in a way that is acceptable to the community”

What’s more, according to Human Rights Watch, Jordan’s personal status code remains discriminatory towards women, despite a 2010 amendment that included the widening of women’s access to divorce and child custody. Jordanian women cannot pass on nationality to their children, while penal code articles 98 and 340, which allow reduced sentences for perpetrators of ‘honour crimes’, remain in force. As Human Rights Watch states: “News reports indicated that at least ten women and girls were killed by male family members in 2015, including a woman shot four times by her father after leaving her family home and reportedly having a relationship with a man her family refused to let her marry.” While it may seem insignificant beside such brutality, the country also has one of the world’s lowest rates of female participation in the workforce, with only 16 per cent of women contributing to the economy.

In such circumstances, how hard is it to combat deeply ingrained social issues? Is Laila willing to take risks? Does she avoid or limit social confrontation? In-deed, does she steer clear of divisive and controversial topics altogether?

“I take all of these things into consideration,” she replies. “I do my best to create graffiti that belongs to the community. If the work belongs to the people, it becomes part of them. I show them an idea and force them through the energy inside the work to stop and to think. And that content should be about an issue that society has.

“I always get permission everywhere I decide to work, because the last thing I want is to reach a point where I see my art being erased, or where I have to pay a fine. How would that help me? Through my art I’m challenging stereotypes, but in a way that is acceptable to the community, because I don’t want to be an enemy. I want people to support me. I want to inspire people and show them that they can take control of their lives and achieve their dreams.

“There are so many stereotypes about how girls here are victims and don’t have any rights. I’m trying to change that, because I believe that we do have many girls who can take the lead. All the female symbols I paint are new to the street. [And] by painting murals of strong, powerful women I try to show that women can express themselves despite the limits that society or community puts on them.”

One of Lalia’s first major projects was her participation in Women On Walls, a feminist street art festival based in Cairo, for which she chose to raise the issue of sexual harassment, particularly in the streets of Jordan’s towns and cities. “It is a message to guys in general,” she said at the time. “Guys look at girls as objects. The media shows the girls as objects.”

Yet hers is protest within the realms of convention. Which is understandable con-idering the conservative society from which she has emerged. Her surroundings are much like any other Palestinian refugee camp in Jordan, Lebanon or Palestine. Impoverished, crowded, patchily dilapidated, she herself was born in a one-room apartment. She now lives with her family in a 700-square-foot house and often paints nearby, practising the skills she has learnt during the course of her year-and-a-half-long journey into graffiti. 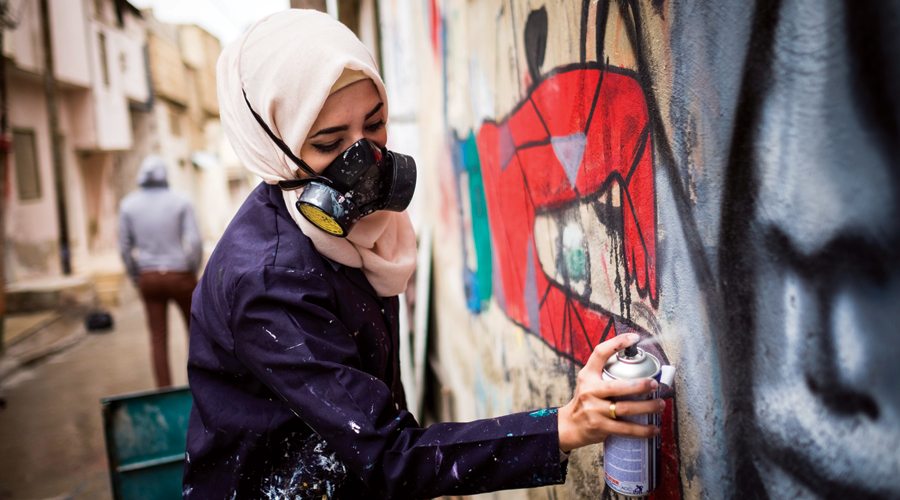 “It was a challenge to do with no previous experience, but it was fun and I learned,” she says of her beginnings in graffiti. “I disconnected from my surroundings and became an element of the wall. From that moment graffiti gave me a new dimension, something different from what other materials and other art gave me. Each piece had something new. I developed my skills, my muscles (the pressure on my arms had been hard when I first started), and my speed. The spray can is now mostly under my control and I have learned new techniques that create a certain effect or texture. I also usually use a piece of thick paper to create sharp lines; brushes too at certain points within the creation of a piece of work.”

Laila is limited, however, to a certain extent by the tools that are at her disposal. She does not have, for example, multiple spray cap sizes and has access to only certain colours. Nevertheless, she is beginning to experiment with new patterns and techniques, most notably calligraphy, as well as the introduction of different materials in her creative process.

Much like the Lebanese street artist Yazan Halwani, she also walks a lot. Mainly to identify potential walls for future work, but also to meet people and talk. Through conversation she identifies causes and concerns and then makes rough drawings in a sketchbook. She will then start with a base colour and then build her next piece of street art from there.

“The idea is that the walls will reflect my energy to the people,” she says.